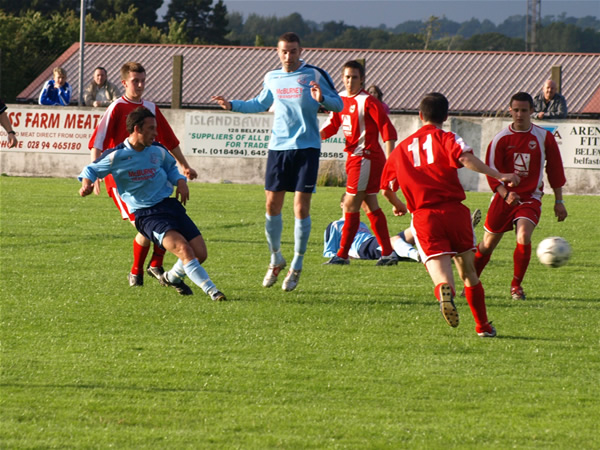 ROY Walker's reign as Ballymena United manager got off to a flying start with a comprehensive victory over Chimney Corner in their first pre-season friendly.

It was a new look United side who took to the field at Allen Park, with a number of senior players omitted from the squad, as Walker took the chance to blood his new players as well as some of the younger squad members.

Alan Blayney, Joe McDonnell and Neil Teggart all made their first outing in the sky blue of the Braid, alongside Reserve team players Archie Stewart and Liam Mullan. Walker also gave an outing to trialist Liam Hogan, a 19-year-old former Linfield full-back.

The visitors pressed forward from the off, and their relentless attack took only six minutes to trigger an avalanche of goals in the Chimney Corner goal.

Gavin Melaugh's left wing across the face of the goal deceived the goalkeeper, and left transfer-listed striker Davitt Walsh with the simple task of knocking the ball home from close range.

Two minutes later the lead was doubled, as Liam Hogan's deep cross was met by Teggart whose mishit shot fell kindly to Walsh, who broke the offside trap to fire in his second goal in as many minutes.

This was an early blow to new Chimney Corner boss, Neil Candlish, as he watched things go from bad to worse in the first half - as the Skies went three goals ahead on the ten minute mark.

Liam Mullan's corner was flicked on by Thomas Wray to Neil Teggart, and the former Sunderland striker fired through a crowded box for his first goal in Ballymena colours.

On 14 minutes, Ballymena were awarded a free-kick on the half-way line for a foul on Mark Picking. Gary Haveron floated the ball into Teggart, who controlled excellently with his chest before rifling home for goal number four.

A free-kick on Joe McDonnell for high feet on the half-hour mark led to a fifth for the Warden Street side, as captain Gary Haveron curled an inch-perfect effort from 25-yards past the helpless home goalkeeper.

Eight minutes into the second half, the Sky Blues continued where they had finished the first when Paul McNeill's through-ball allowed Gavin Melaugh to slot in United's sixth of the evening.

Despite the slow-down in pace of the second half, there was still time for a seventh and final strike on 62 minutes when Corner defender, Johnny Rice tripped Michael Ward in the area â€“ and Gary Haveron tucked away the resulting penalty.

With 20 minutes remaining Chimney Corner forced their first effort of the game, when they struck the bar from the edge of the box with O'Neill well beaten â€“ however the IFA Premiership side remained in complete control throughout.

Walker will continue his side's preparation for the new season on Thursday night with the visit of Glasgow Rangers XI.