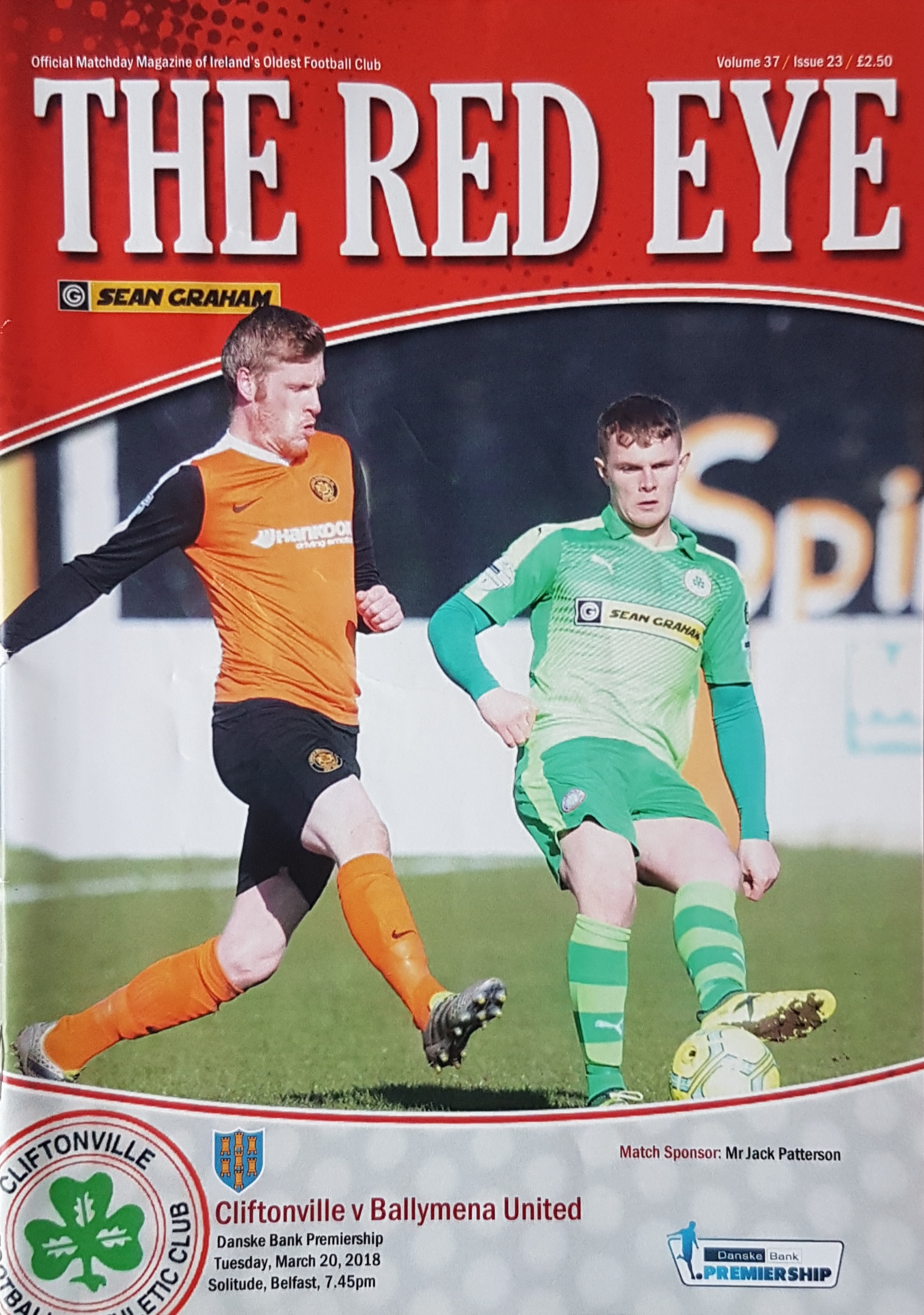 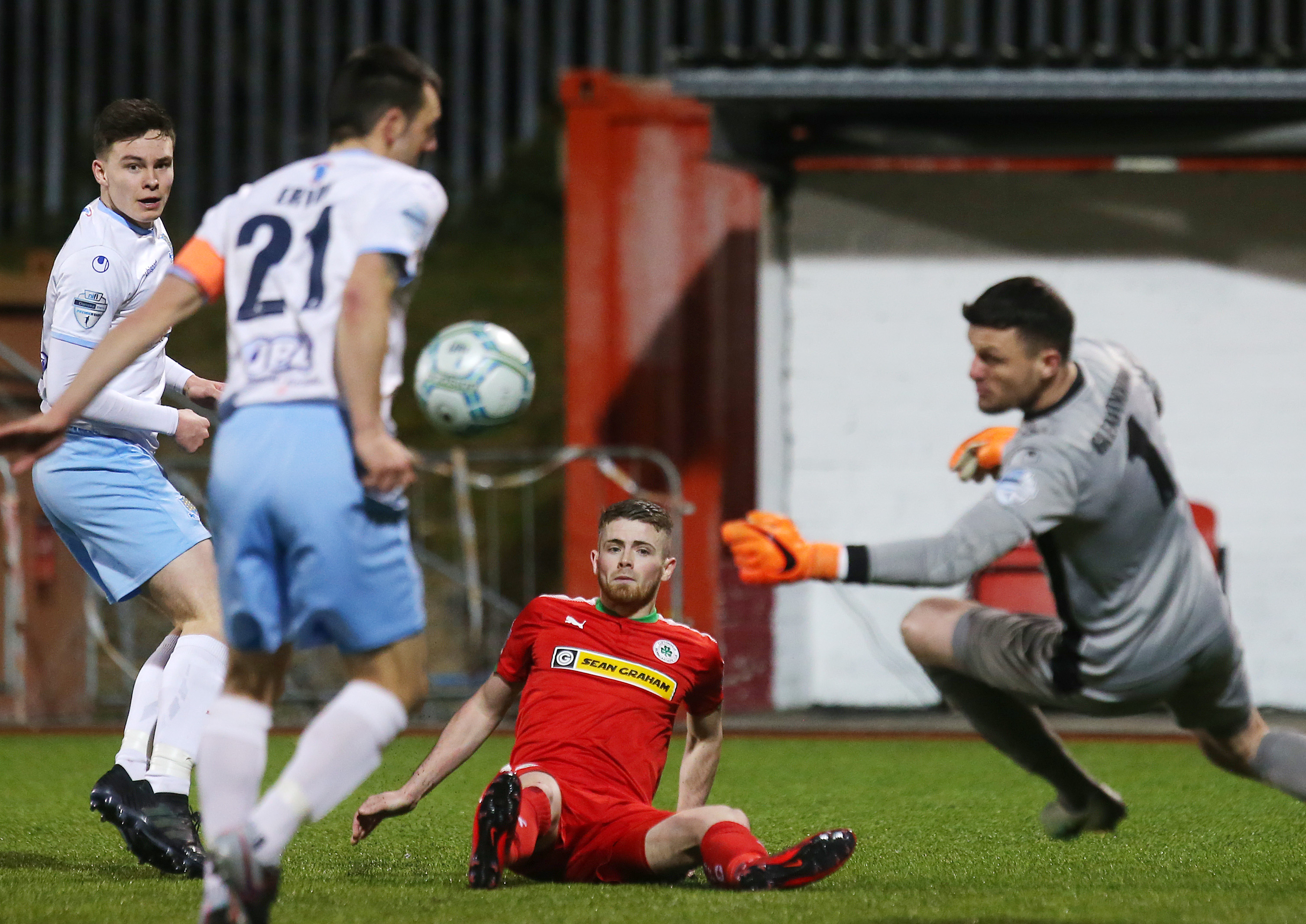 Ballymena United's top six chances are still alive after an impressive 2-1 victory over Cliftonville at Solitude.

Ross Glendinning was called into action inside the opening 30 seconds when Jim Ervin's clearance fell to Joe Gormley, but his shot was straight at Glendinning. Ballymena's first effort came on 6 minutes. From a free kick Johnny McMurray hit his shot on the turn but Brian Neeson saved well.

Having saved from Chris Curran a minute earlier, Glendinning pulled off an outstanding double save on 10 minutes. Rory Donnelly created space to shoot inside the box but Glendinning saved well. The ball fell to Jay Donnelly and from 18 yards his effort looked set for the top corner, until Glendinning produced a spectacular save onto the crossbar.

There wasn't a gulf in difference between the sides for the opening 30 minutes, but the hosts had the better chances, along with gritty United defending. Jay Donnelly curled an effort just wide after cutting in from the left, before an inviting ball from Liam Bagnall was narrowly missed by both Donnelly brothers.

On 38 minutes the deadlock was broken, slightly against the run of play, by The Sky Blues. Out of nothing Fra McCaffrey played a fantastic through ball to Jonathan McMurray who stayed onside, and one on one with Neeson he finished in an unorthodox yet effective manner.

Just before half time McCaffrey displayed an outrageous piece of skill before finding McMurray, but his ball across goal to Cathair Friel was just too hard as United led at the break.

Rather expectedly the second half was a backs to the wall performance from United, with Cliftonville threatening Ballymena's goal on numerous occasions. Early on Jay Donnelly worked space for a shot from 18 yards, but it was straight down the throat of Glendinning. On 54 minutes the visitors survived a scramble in their box. Shane Grimes found Gormley in the box but an impressive Johnny Flynn made a goal-saving tackle before after a spot of pin-ball Glendinning made a save.

A minute before the hour mark The Reds rattled the woodwork. A corner from Jude Winchester was met by the head of Rory Donnelly and his effort came off the top of the bar before landing on top of the net. With little play in Cliftonville's half, the North Belfast side forced Glendinning into another good save from Rory Donnelly.

With 67 minutes gone McMurray was forced off with a niggle in his hamstring and was replaced by Matthew Shevlin, who missed a great chance to score after little over a minute on the pitch. McCaffrey played the striker in and one on one with Neeson, Shevlin tried to place it, seeing his attempt saved before Levi Ives cleared on the line. With the game opening up slightly, Rory Donnelly turned a drilled cross from Gormley over the bar from just six yards out.

After another stint of brave and robust defending, United went up the other end and grabbed a second goal. A short corner was played to Tony Kane and his cross eventually dropped to Jonathan Flynn, who smashed the ball home from close range in front of the Sky Blue faithful to make it 2-0.

Cliftonville continued to attack the United goal after falling 2-0 behind and from a corner Garry Breen jumped highest but headed narrowly over. 2 minutes later sub Leroy Millar drilled a shot straight at Neeson after great play from Shevlin. In the build up to the chance Breen went down in agonising pain with what looked like a serious injury and after over 5 minutes of treatment he was stretchered off to warm applause all around the ground. With 3 changes made the hosts were reduced to 10 men.

Inside 6 minutes of added time Shevlin tested Neeson again before Glendinning pulled off another wonder save. Sub Tomas Cosgrove found Rory Donnelly at the back post and his effort was incredibly tipped around the post by the United 'keeper.

However, with 4 minutes left Cliftonville set up a nervy finish as defender Jamie Harney netted. Harney tried and failed to score via a bicycle kick from a long ball, but whilst on the ground he finished off his own rebound beautifully.

Cliftonville failed to create one final chance to find an equaliser in the dying seconds and Ballymena held on for a great 3 points after an impressive display, especially at the back, to set up what could potentially be a top 6 decider against Glentoran after a much needed win.