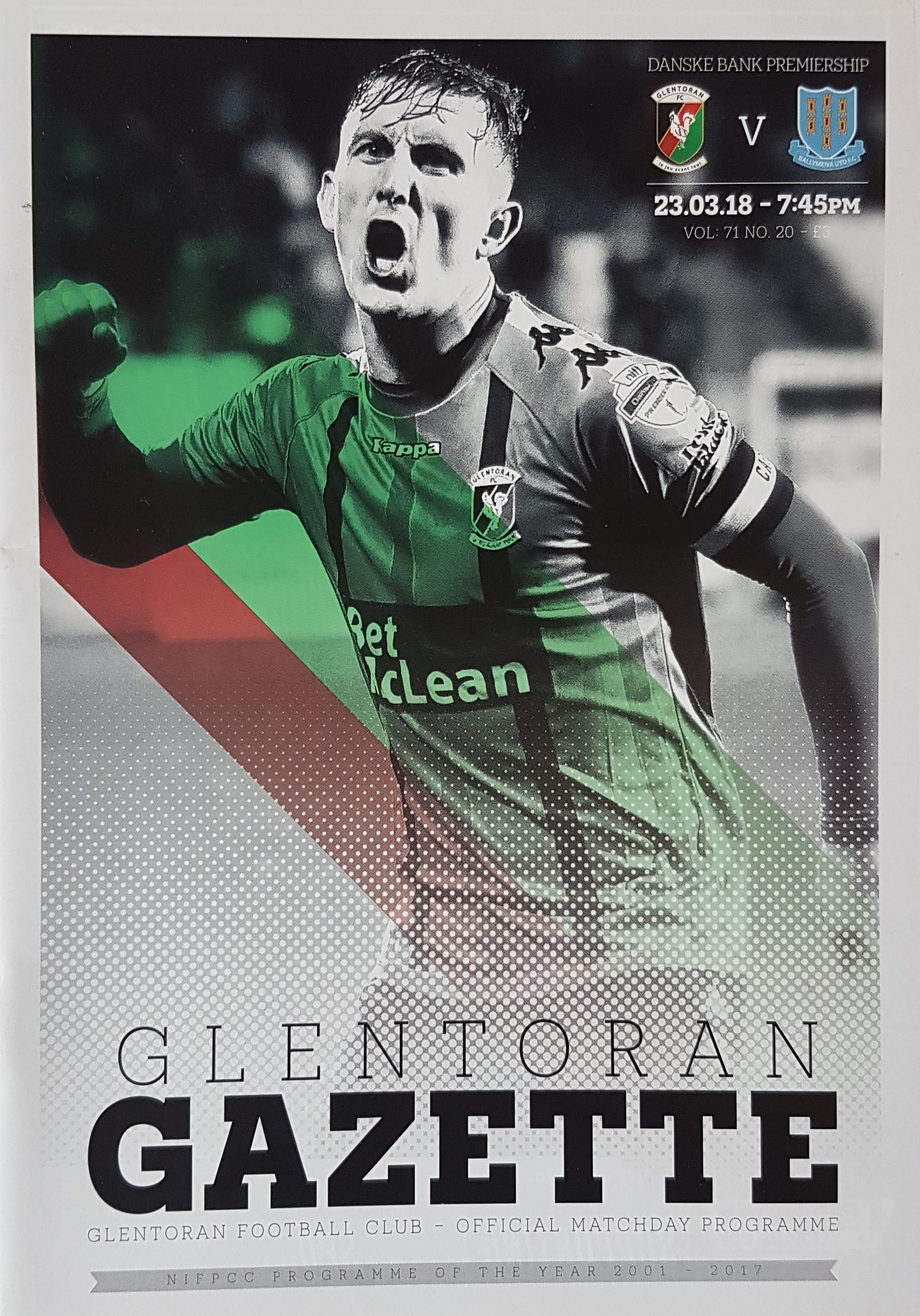 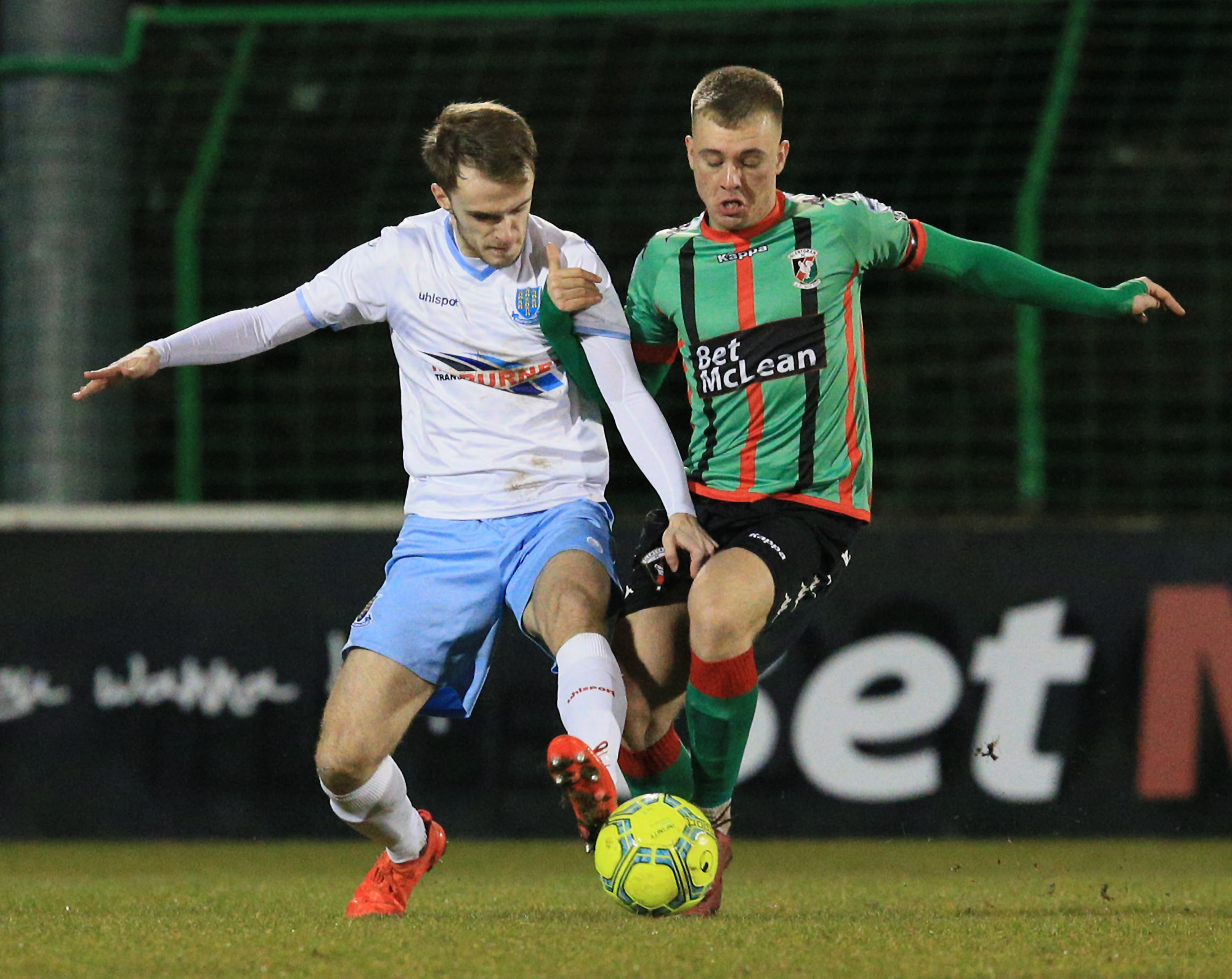 Ballymena United made it two wins in four days with a 2-1 win at top six rivals Glentoran.

The Glens saw more of the ball in the opening 5 minutes but the first chance of the game fell to Joe McKinney. Tony Kane sent in a fantastic delivery to find McKinney unmarked 6 yards out, but when he possibly should've scored he instead saw the ball saved by Elliott Morris.

From the chance onwards, Ballymena started to look the more settled and Steven McCullough forced Morris into a save after his shot bounced awkwardly. From the resulting corner, United went in front. The ball in was cleared as far as Cathair Friel and on the edge of the box he finished superbly with a lifted shot on the turn into the top corner.

4 minutes later the home side almost levelled when an acrobatic effort from Curtis Allen hit the post before rebounding off Ross Glendinning and going just wide. Seconds later a long throw in fell to Steven Gordon 12 yards out but unmarked he skied his effort over. With Glentoran continuing to react fairly well to going behind Ross Redman was allowed to take the ball from his own half into the box but his tame attempt was easily gathered.

The last 20 minutes of the half were an even affair. Good work from Friel and Conor Quigley teed up Kane with his first time shot going just wide. Minutes later McKinney knocked a corner down for Kofi Balmer, but he sliced over. In the closing minutes of the half Allen shot just over from a tight angle whilst on the turn before Redman cut the ball back on the edge of the box for Dylan Davidson but Jim Ervin made a vital block, as The Sky Blues went into the break ahead, narrowly the better side.

For a lot of the opening exchanges in the second half United were expectedly on the back foot as Glentoran chased an equaliser. However, 4 minutes in the vistors had a strong penalty shout turned down when Redman looked to have fouled Friel as he pulled the trigger. Whilst Glentoran saw more of the ball, clear cut chances weren't frequent.
A dangerous corner from Redman went right across the face of goal, with no Glens man there to tap it in. Just inside the final half hour Braniff found the time and space to shoot from distance but couldn't trouble Morris. Not long after Braniff went down injured and couldn't continue, being replaced by Matthew Shevlin as United suffered yet another injury set back.

On 67 minutes Glentoran equalised in controversial circumstances. Gordon jumped to challenge Glendinning for a cross and despite seemingly clearly fouling United's 'keeper, referee Stuart Gregg somehow allowed play to go on, infuriating those in Sky Blue, and the ball dropped to Curtis Allen who scored past Ervin on the line to make it 1-1.

With the home side now on course for the point they needed to secure that all important 6th place finish ahead of United, the Braidmen had to look to attack. From a free kick 25 yards out Kane narrowly missed the target before Friel had another penalty claim turned away.

Then, with 13 minutes left, Ballymena regained the lead. McCullough looked for Quigley at the back post but his cross was cleared to Kofi Balmeron the edge of the box. The centre half then unleashed a rocket, similar to his goal against Crusaders, that deflected home past Morris, although it was heading in anyway.

The goal set up a grandstand final 10 minutes in this crucial encounter and at the other end after a bit of a confusing goalmouth scramble, Glendinning eventually gathered gratefully. With 2 minutes left a ball in from Nathan Kerr was glanced just wide near post by Daniel Kelly.

The Glens continued to push in the 3 minutes of extra time, Peter McMahon having a deflected effort saved by Glendinning before sub Calum Birney headed the corner wide after goalkeeper Morris had come up. With frustration evident amongst the Glens players, Willie Garrett saw red late on after a minor altercation with the linesman, grouped with dissent saw the defender sent off.

United held out for back to back 2-1 wins and now a win on Monday night over Ballinamallard will see United pip Glentoran to 6th place.