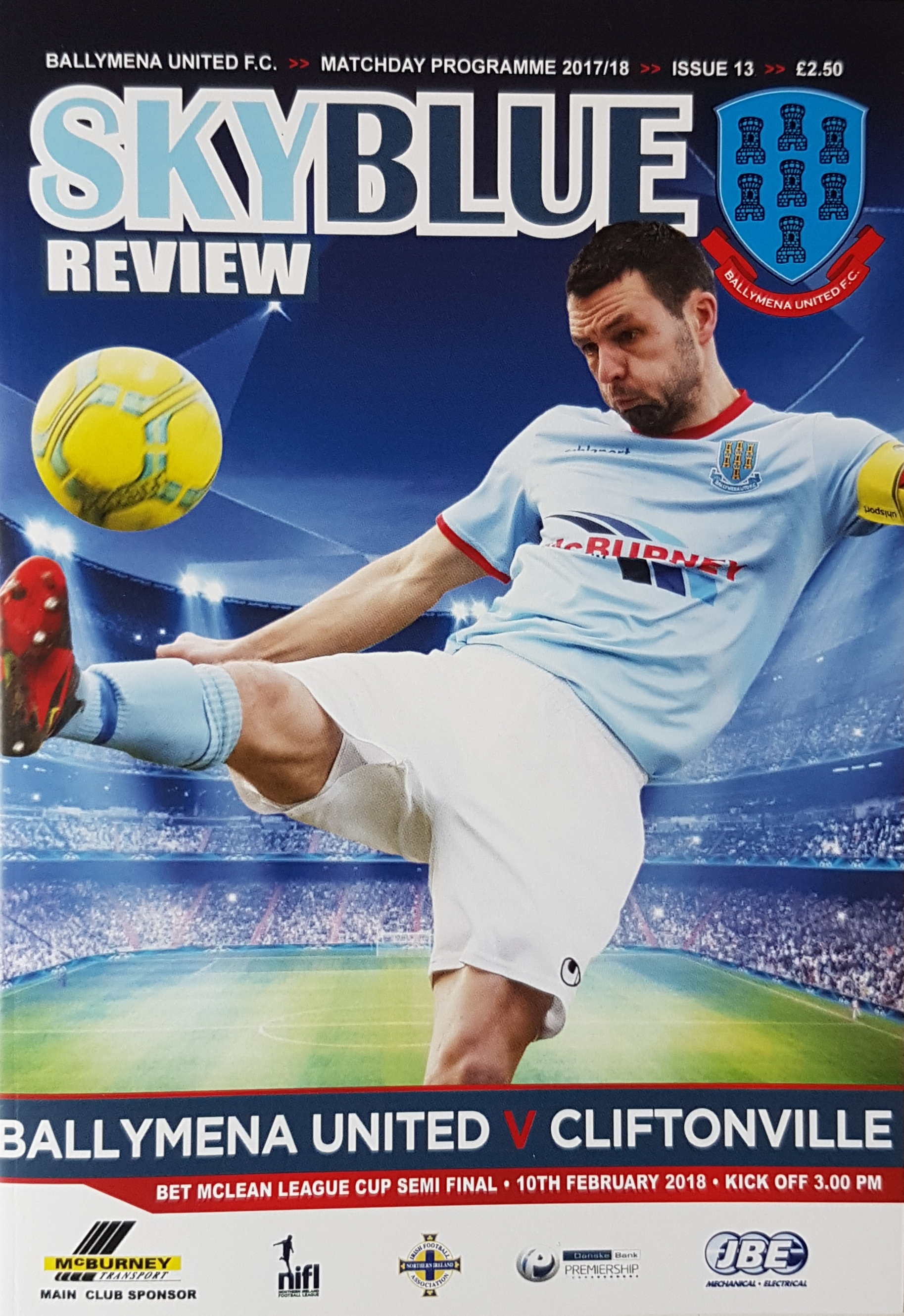 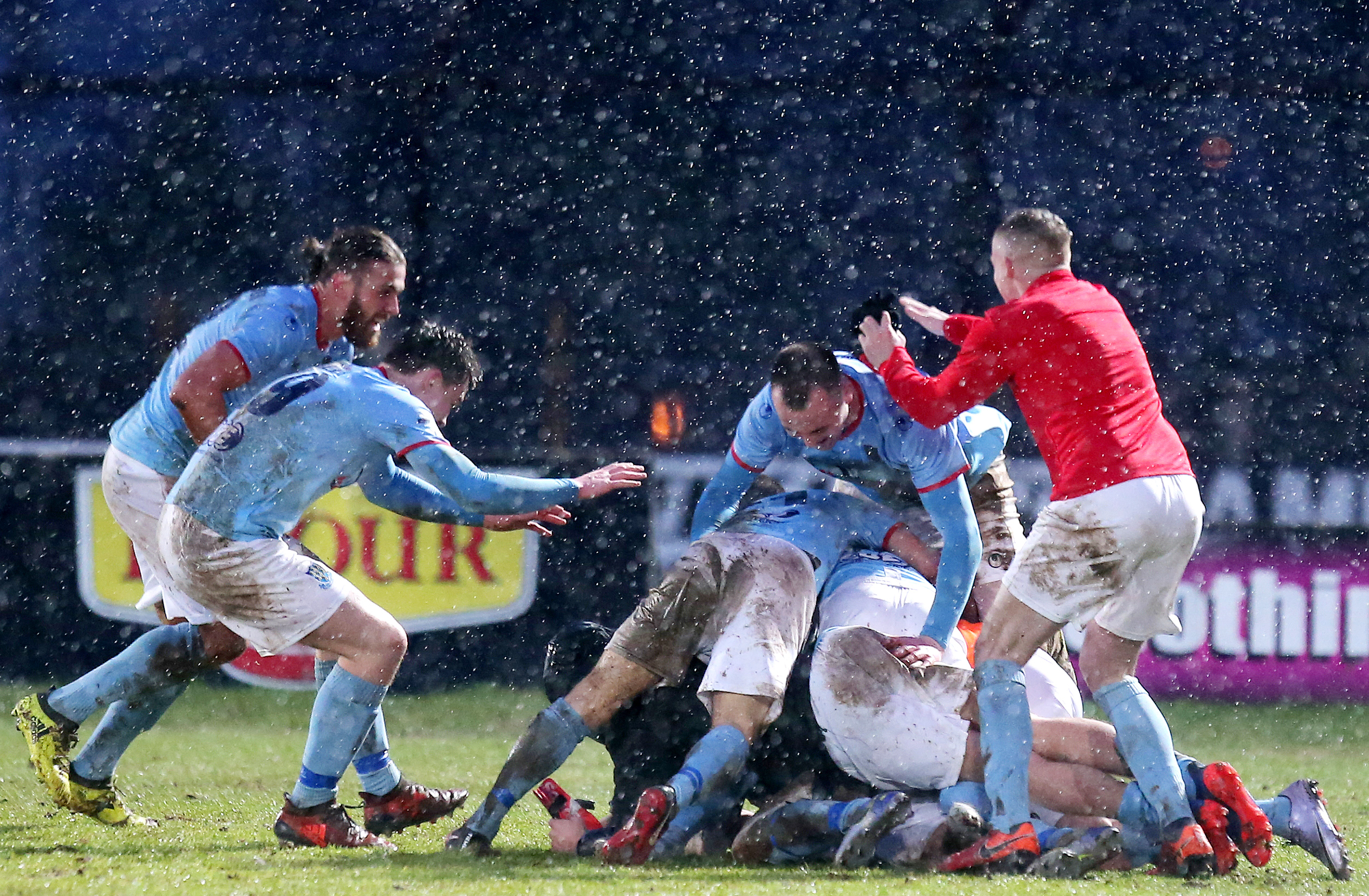 League Cup holders Ballymena United will meet Dungannon Swifts in next weeks final after a 3-1 semi-final win over Cliftonville at the Showgrounds.

After 3 failed attempts to get the semi-final played, the match finally went ahead and Ballymena welcomed back Andrew Burns and Leroy Millar following long term injury lay-offs.

Both sides started brightly but it took a long time for either to create meaningful chances. A low, dangerous ball from Joe Gormley was intercepted by Ross Glendinning after 10 minutes, the first either 'keeper was required to react. Ballymena's first real opening came 3 minutes later. A free kick from Tony Kane only needed a touch from Cathair Friel, but the forward couldn't reach it as Brian Neeson gratefully gathered.

It would take till the half hour mark for the next breach of either defence, but the chance was a good one for Cliftonville's Conor McDonald. Chris Curran delivered a cross for McDonald, who had space 12 yards out, but his first time shot sailed over United's bar. At the other end a corner was cleared only as far as Jim Ervin, with his stabbed volley effort dropping onto the roof of Neeson's goal.

On 36 minutes a nice turn from Friel gave him plenty of time and space, but his long range shot went well wide of The Reds goal. By this point chances were finally starting to come more frequently. Jay Donnelly cut inside on the left hand side, with his shot stinging the palms of Glendinning. Shortly after, a flick on from Stephen Garrett was heading for Gormley, only for Ervin to make a goal saving headed clearance.

Just before the break good play between Friel, Millar and Johnny McMurray allowed the latter the chance to shoot, but his attempt went straight at Neeson. With The Sky Blues ending the half well Millar had a volley saved by Neeson as the sides headed in level with nothing between them.

Like the first half, the second period took a minute to get going, however on 55 minutes the deadlock could've been broken. A corner from Kane was headed on at the near post by Friel and it landed at the feet of Kevin Braniff, who was stood almost on the line, but whilst trying to find the corner on the turn, he put the ball wide. With an hour gone it was Gormley's turn to cut inside and have a go, but not for the first time it was straight at Glendinning.

The deadlock was finally broken on 61 minutes by the home side. McMurray did well on the right and played in Kane who saw his shot parried by Neeson, and Leroy Millar was on hand to send the rebound home from 6 yards to mark his return with a goal.

Cliftonville reacted well to going behind but again failed to create anything meaningful. A free kick from TomÃ¡s Cosgrove caused a bit of a goalmouth scramble but Kyle Owens was able to clear away from Jamie Harney.

With 18 minutes left United widened the gap further, making it 2-0 with the simplest of goals. A long throw in from sub Conor McCloskey was met by the head of Tony Kane, who headed home past Neeson to put Ballymena on the brink of the final.

Like after the first goal, Cliftonville reacted well with United happy to sit back. Sub Rory Donnelly drifted past two Sky Blue shirts before shooting straight at Glendinning. On 76 minutes Levi Ives had a go from long range, his shot moving about in the air making it awkward for Glendinning who saved well before McCloskey cleared the danger. As The Reds continued to probe for a goal, Gormley tried to find Jude Winchester after a driving run, but Ervin again stepped in to make a vital block.

As time ticked on United were defending comfortably with Cliftonville unable to break through. At the opposite end McMurray tried to kill the game off in typical fashion with a half volley from all of 30 yards, but it went straight at Neeson. However United weren't so comfortable on 89 minutes when the North Belfast side scored to set up a grandstand finish. United failed to clear allowing Gormley to get a shot away which was saved by Glendinning, but then pinged off Ervin and headed towards goal. Jay Donnelly was quickest to react and poked the ball over the line, referee Keith Kennedy giving the goal after a delay on the line.

The 4 minutes of added time were nervy for the Sky Blues with Cliftonville looking to equalise. However on 93 minutes Ballymena booked their place in next Saturday's showpiece final in style. Neeson came up for a Cliftonville corner but it was cleared by Ervin to Cathair Friel, who from inside his own half managed to find the target spectacularly to give United a third goal.

The win puts Ballymena just one win away from retaining their trophy, with only Dungannon standing in their way at Windsor Park on Saturday.