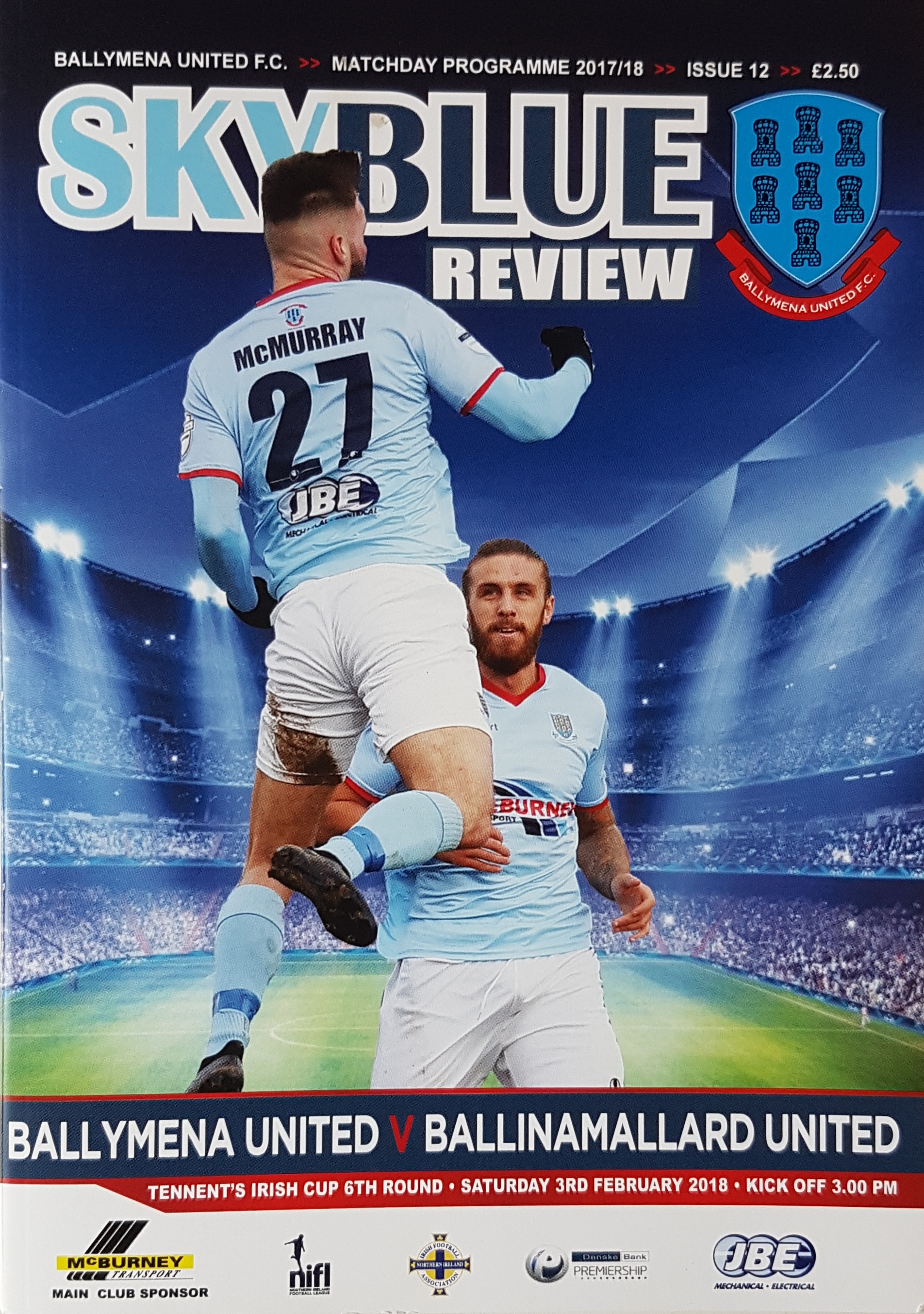 Ballymena United needed penalties against Ballinamallard United after coming back from 2-0 down.

Ballymena managed the first chance of the game with Cathair Friel taking the ball off the feet of Johnny McMurray before curling an effort over. On 6 minutes Ballinamallard got the ball into United's box for the first time and it resulted in a goal. Jason McCartney crossed from the left and found Stephen O'Flynn unmarked, who placed his volley neatly past Ross Glendinning.

With 14 minutes gone Kevin Braniff thought he'd equalised for Ballymena when he turned home the rebound after Richard Brush had saved from a Friel header, but the flag was up for offside. Minutes later Tony Kane almost scored a stunning goal after a delightful flick over his marker's head, before his hard volley was blocked by Ryan O'Reilly.

With virtually The Mallard's second attempt on goal the visitors made it 2-0 on 27 minutes. From very little Colm McLoughlin produced a nice back heel to set up Shane McGinty, with his long range shot taking a small deflection on its way past Glendinning.

Just after the half hour mark Ballinamallard almost made it 3. Friel cleared a corner as far as Sean Noble and his attempt from the edge of the box rose just over the crossbar. At the other end, Friel teed up McMurray who had his low shot well saved. Glendinning made a terrific save on 35 minutes to keep the score at 2. Noble lined up a free kick from 20 yards but Glendinning was able to save well to his left hand side.

With 7 minutes of the half left The Sky Blues scored their first of the game. A nice flick on from Friel set Jonathan McMurray clear and he just about beat Brush to the ball, lifting it over the 'keeper and over the line.

Ballymena were forced into a change just before half time, Willie Faulkner replacing the injured Joe McKinney. United ended the half strongly, with Emmet Friars heading a Kane cross wide and Kevin Braniff narrowly failing to get a vital touch on a Friel cross, however the visitors took the half time lead.

At half time Kyle Owens came on in the place of fellow centre half Friars. The second half was mostly all the hosts. 5 minutes in sub Faulkner switched play to Friel, who cut inside only to see his shot deflected to Matthew Shevlin, who missed a gaping goal but was offside anyway. Despite the United pressure that would follow, Packie Mailey sent a free header just over the bar for The Ducks.

A nice run from captain Jim Ervin saw the ball eventually fall to Friel, whose cross/shot narrowly went past Braniff and McMurray. On the hour mark Braniff missed a glorious chance for 2-2. McMurray played in Braniff who only had 'keeper Brush to beat, but somehow put the ball reasonably well wide. David Jeffrey turned to Conor McCloskey as his final sub with United continuing to be frustrated going forward. A corner was headed out as far as Kane who set himself before blasting his effort well over.

In a rare passage of play at the other end McGinty looped a dangerous shot just over. With 6 minutes left Friel added his name to the list of United players to miss fantastic chances. From inside 10 yards both McMurray and Braniff failed to get shots away before Friel somehow blasted over.

On 88 minutes Ballymena finally grabbed a dramatic late equaliser. A long ball was headed on by Braniff to McCloskey. He couldn't manage to work a shot but the ball fell nicely for Jonathan McMurray, who with the help of the post slotted past Brush for his second of the day.

And it could've got even better for The Sky Blues who almost didn't need extra time. Friel was one on one with Brush but instead of shooting tried to round the 'keeper, with Brush winning. With a minute to go Kofi Balmer had a powerful header blocked on the line with extra time being required to split the Premiership teams.

The first period of extra time wasn't a classic. The only effort on either goal saw a snapshot from McMurray call Brush into action, as he tipped the ball round the post. The final 15 minutes provided countless chances. A minute in Friel decided to cross for Braniff instead of shooting, with Braniff unable to find the target. A minute later Balmer attacked a corner, with his header going just wide.

Ballymena weren't the only team creating and a half volley from Joshua McIlwaine was saved then spilled backwards and then saved again by Glendinning. It was a chance a minute football at The Showgrounds with Braniff next to go close, hitting the side netting from a tight angle. With 7 minutes to go Brush pulled off a big save to deny McCloskey. The winger was found by Friel, but after cutting inside Brush made himself big to snuff the chance. Mallards sub Ryan Curran picked up on a slip from Ervin and cut his shot inches wide of the post as extra time finished level and penalties loomed.

The ABBA system was used for the shootout and after both scored their first 2, Kane converted and McGinty missed to leave United 3-2 up. However a miss by Owens made it 3-3 going into the final spot kicks. Ervin made no mistake but the deciding penalty from O'Reilly rattled the crossbar and over to see United win and squeeze into the final 8 where they'll meet Larne at home.