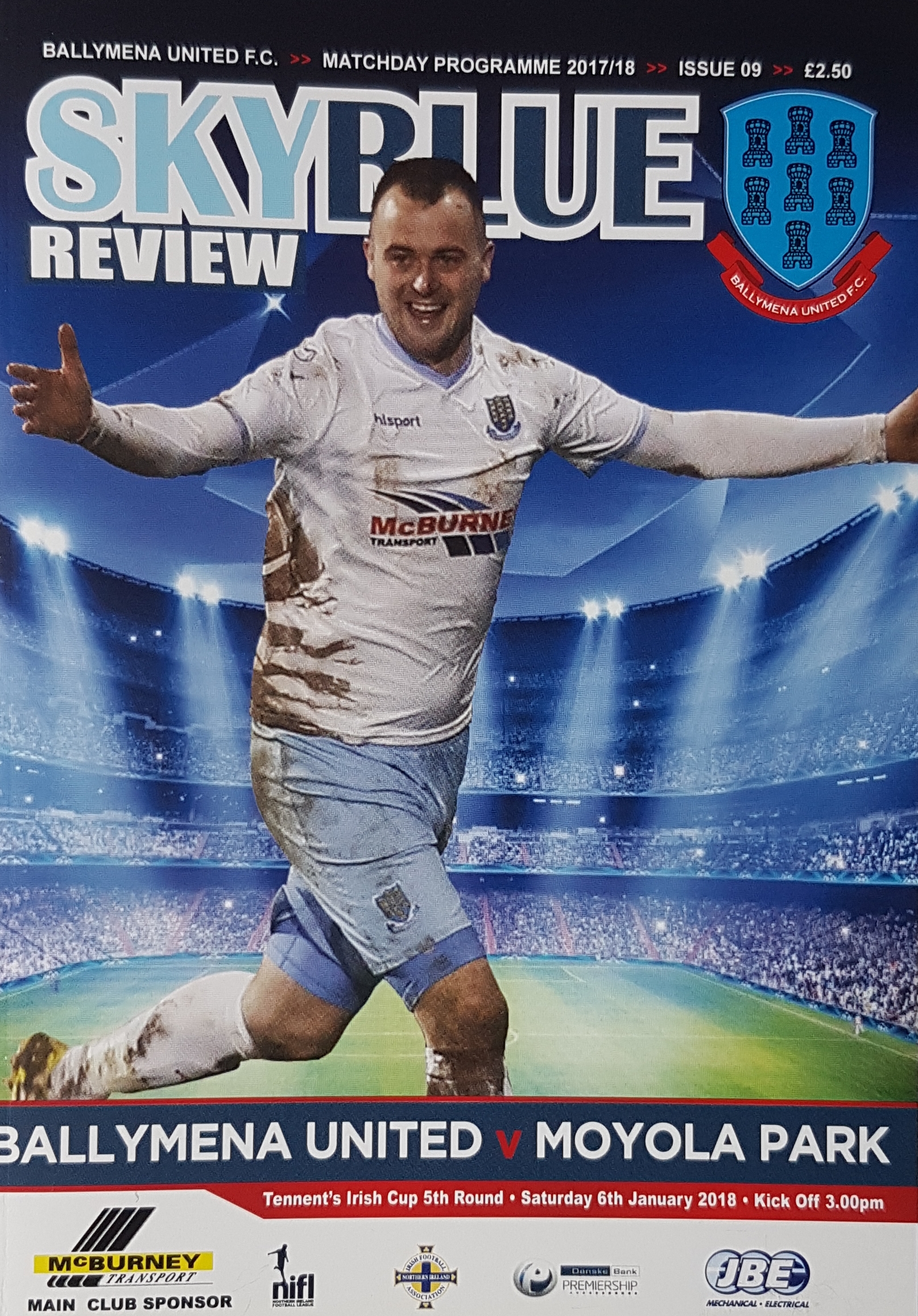 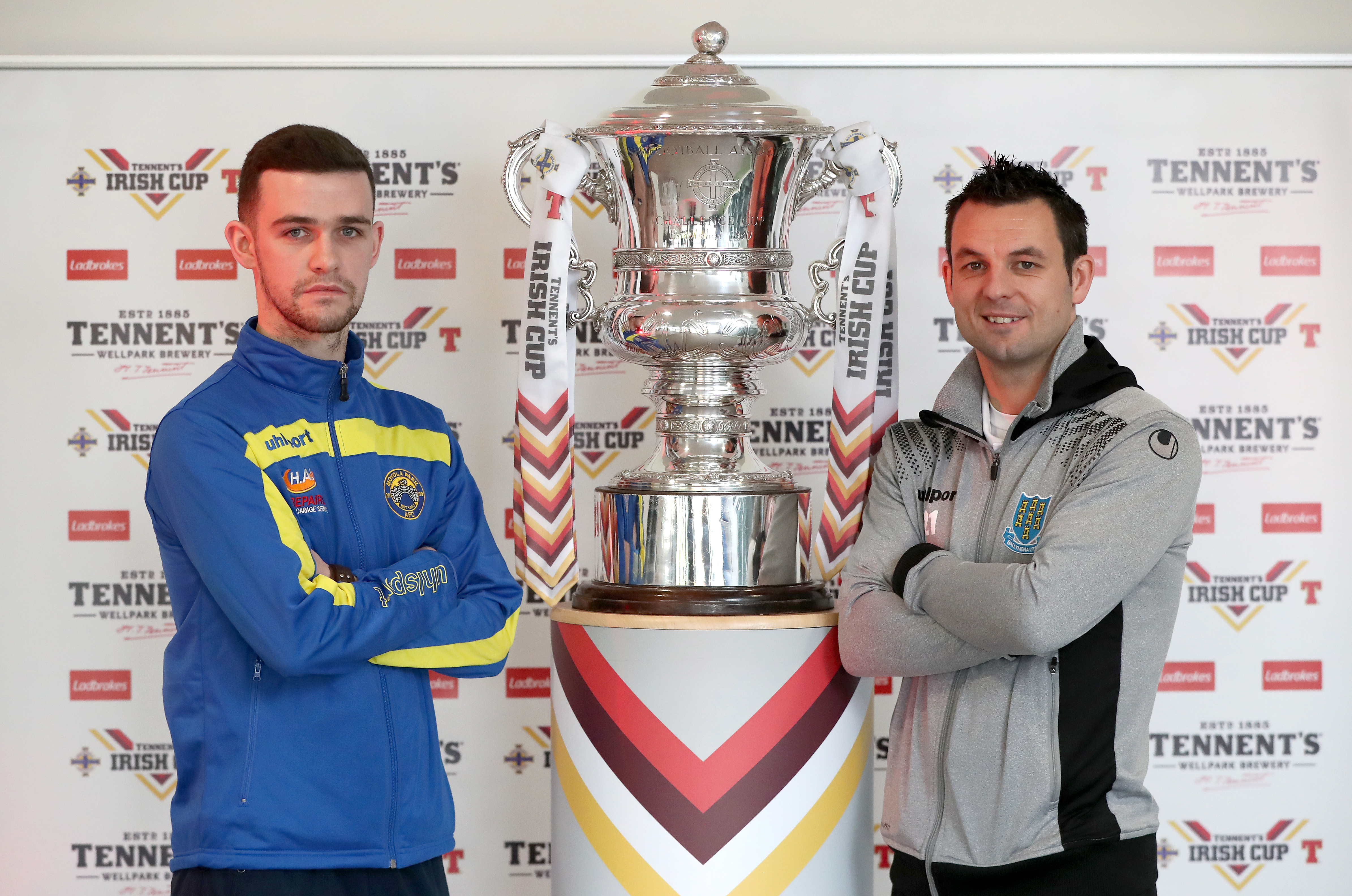 Ballymena United are safely through to the sixth round of the Tennent's Irish Cup after a 4-0 home win over Moyola Park.

The visitors, 4th in the Premier Intermediate League, almost took a shock lead just 4 minutes in. Full back Aaron Harris played in Ryan Young and from an angle the winger rattled the underside of the crossbar. 5 minutes later Ballymena had the ball in the back of the net as Fra McCaffrey turned home a Conor McCloskey cross, but it was cancelled out for offside.

On 13 minutes The Sky Blues took the lead. A corner from Tony Kane evaded everyone at the front post and found Kyle Owens who stabbed the ball home from close range to keep up his impressive recent goal scoring record.

After the early scare at the other end, Ballymena started to control the play and went close to making it 2 when a fantastic back heel from Matthew Shevlin set up McCloskey, but he sliced his shot just wide. With 28 minutes gone United doubled their lead. McCaffrey slid a pass into the path of Owens and the defender's nice touch set up Matthew Shevlin who buried the ball low past Marcin Farniok to give Ballymena a 2-0 lead.

Despite seeing little of the ball, Moyola were holding their own when they did have it and Nicky Hudson found Tiarnan Rafferty unmarked on the edge of the box, but his shot was easily gathered by Ross Glendinning. A corner from Kane made its way into the back of the net thanks to an error from Farniok on 36 minutes, but the goal was ruled out for a push on the 'keeper. A couple of minutes later Farniok pulled off a terrific triple save to keep Moyola within 2. A shot from Kevin Braniff from 12 yards out was parried out by Farniok to Jim Ervin, whose rebound was again saved by the 'keeper but only as far as Shevlin, but again Farniok saved well.

In the next attack Shevlin produced a nice turn and shot inside the box, but again Farniok was on hand to deny the forward. With 5 minutes left in the half Glendinning was forced into making a good save to stop Rafferty. Tomas McCann picked up on a mistake from Owens and played in Rafferty, with Glendinning tipping his curling effort around the post as Ballymena took a 2-0 lead into the break.

It took 5 minutes into the second half for either goalkeeper to have to make a save. A half volley from distance via Kane's boot was at a comfortable height for Farniok to make a simple catch. However on 51 minutes Kane wouldn't be denied as he made it 3-0 to the Braidmen. Farniok dealt poorly with a through ball, parrying it outside of his box before a poor clearance which fell to Tony Kane. The midfielder still had work to do but from at least 40 yards he directed the ball beautifully into the empty goal.

The second half was even more one sided than the first and Steven McCullough almost made it 4 when he was played in by a neat Braniff flick, but his effort agonisingly bypassed the far post. Whilst McCullough could've made it 4, Braniff should've shortly after. McCaffrey burst through only to see his attempt saved, the rebound fell to Shevlin but his shot was blocked, only into the path of Braniff but from just outside the 6 yard box he sent the ball wide of the post. On the hour mark Ballymena made it a hat trick of disallowed goals when Shevlin turned in a McCloskey cross from close range, but it was chalked off for an apparent foul in the build up.

Moyola were restricted to a couple of long range attempts which sailed over the bar and with 18 minutes left United found a 4th. Braniff intercepted a weak back pass from Hudson and after seeing his shot saved, Matthew Shevlin was there to place the rebound past Farniok for his 2nd of the afternoon.

Braniff almost got in on the goal scoring act himself after a nice turn opened up a shooting opportunity, but Farniok got down well to save. Late on David Jeffrey handed debuts to youngsters Ciaran Dobbin and Lee McCune from the bench as United completed a comprehensive win and now face Ballinamallard at home in Round 6.