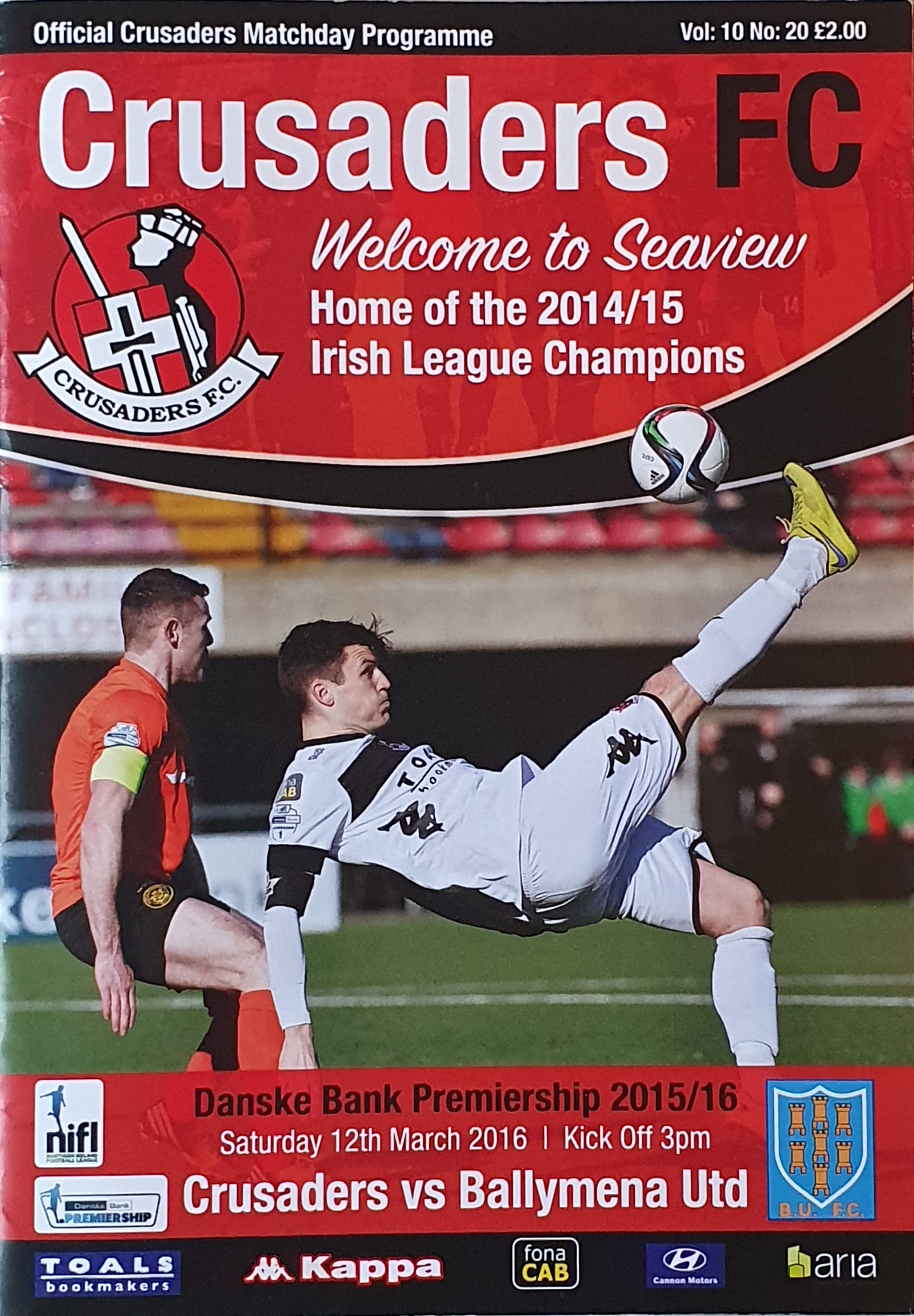 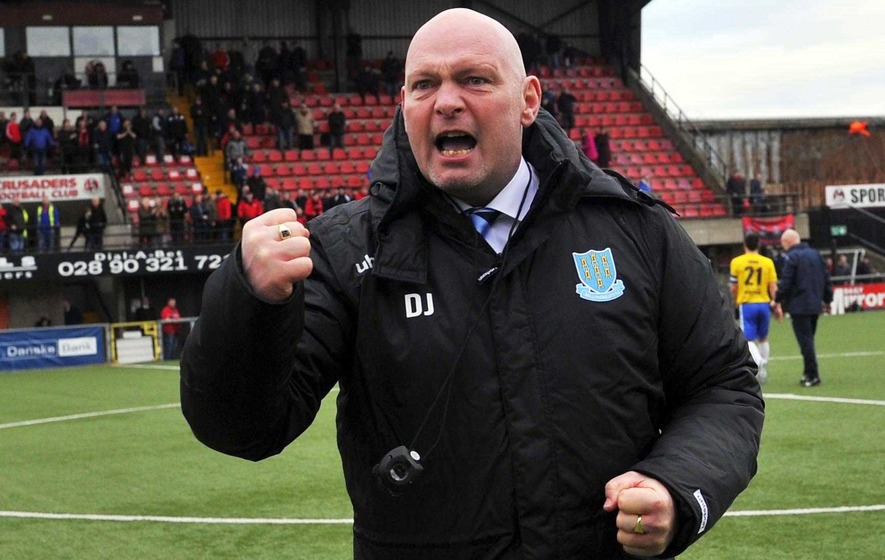 DAVID Jeffrey steered United to a scoreless draw against league leaders Crusaders at Seaview this afternoon.

United were on the attack within minutes of the game kicking off at Seaview, but the ball went behind for a goal kick. At the other end Crusaders won a free kick but Colin Coates' cross was put out for a corner which was easily cleared by the Ballymena defence. As Crusaders came back up the pitch, the visitors struggled to clear their lines but Alan Blayney was on hand to collect the ball.

Craig McClean had to be alert as a ball was crossed into the box and he cleared it forward. As the home side went on the attack again their efforts were thwarted by referee Arnold Hunter as Paul Heatley was in an offside position. With 8 minutes on the clock United won a free kick 35 yards out but it was hit straight into the wall, and in the follow up play Allan Jenkins was ruled offside.

Jordan Owens could've put the Crues ahead shortly afterwards, but Jim Ervin managed to get there just in time, and the follow up shot from Gavin Whyte was wide. United were putting the pressure on and Colin Coates had to step up to clear, before Sean O'Neill was forced into a fantastic double save, the ball going out for a corner. Crusaders then won a free kick 35 yards from goal which was taken quickly to Heatley whose shot was saved by Blayney, resulting in a corner which was cleared by the defence.
United then went on the counter attack and O'Neill was forced into another save from David Cushley. Crusaders then won a free kick but McClean sent it straight to the opposition, but he did eventually head the ball back into the box and Heatley put his volley across the goal and wide. With 19 minutes gone Cushley went in for a challenge against Carvill and required treatment, but he was able to continue. O'Neill had to punch another shot clear, and Cushley had a shot blocked by Billy Joe Burns as the visitors kept the pressure on.

From a free kick in the 21st minute the ball was touched to Coates but his shot was well wide of the target. Gavin Taggart then had a shot that looked to be going in blocked, then Darren Henderson had his attempt blocked by Declan Caddell. The attack went out for a corner but it was sent past everyone in the box and out for a goal kick. Another series of United free kicks were defended well, and Jenkins seen his long range shot go over the bar.

Heatley had a cross easily gathered by Blayney, then the Crues won a corner but the attempted pass to Michael Carvill from Matthew Snoddy was too high and went out of play. After a foul by Coates, Jim Ervin took the long free kick, but Coates was on hand to head it out for a throw. A Crusaders free kick just inside the United half was knocked down by Owens to Josh Robinson but he couldn't control the ball, and United cleared up the pitch. Tony Kane won a corner at the other end and it was sent into the box but Kyle McVey couldn't connect properly and headed it wide.

As the end of the first half approached Heatley touched it across to Whyte who was well positioned but his shot went over. After a foul on Carvill he sent the free kick into the box and Blayney spilt it but United cleared it up to Cushley whose pass to Henderson was too long and easily gathered by O'Neill.
Declan Caddell was taken down in the centre circle moments after the second half had kicked off, but his free kick resulted in a United counter attack. It wasn't long before Crusaders were back in the United half though, Heatley hitting a cross from distance but it was too high for Owens, who hit the bar seconds later when the United defence allowed the ball to bounce in the box. A quick free kick from the Crues led to a corner which Carvill took but it was well defended and Coates ended up putting it out for a goal kick.

Another corner for Crusaders was taken short and led to McClean crossing to Owens who set a shot up for Heatley whose shot was blocked by Blayney before Caddell had a shot blocked by Blayney who was then able to gather. All the pressure was coming from the home side but the United defence stood strong and were dealing with everything that was thrown at them. A foul on Billy Joe Burns led to a free kick which McClean took but as it headed towards the box the flag was raised because Coates was offside.

A handball by Billy Joe Burns gave United a free kick on the left side of the pitch and Tony Kane sent it into the box but Owens was able to clear and, as Crusaders went on the counter attack, Heatley was flagged for offside. Back at the other end Robinson had to be alert before a United shot was deflected for a corner which McClean cleared. As the halfway point in the second half approached Ballymena were starting to come back into the game and Gary Thompson shot at goal but it was over the bar.

United won a free kick on the edge of the Crusaders box after a foul on Henderson, Coates clearing the shot off the line. David Cushley took a shot from about 25 yards and it went narrowly wide of the post. In the 79th minute a run and shot from Jordan Forsythe forced Blayney into a save, then a long throw into the box ended with Coates and Blayney clashing heads.

In the 81st minute Heatley took a shot which Blayney saved, but the referee had already blown his whistle as Heatley had handled the ball. Substitute Eoin Kane had to be alert as Owens was about the pull the trigger and he just got on the end of it to put it out for a corner. Some good play from Allan Jenkins led to a Jonny Frazer shot at the other end but it went over the bar as the Crusaders defence put the pressure on.

With two minutes left on the clock Cushley sent a free kick into the box but it was put over the bar for a corner. Cushley took the corner and it went through the penalty area to Coates who sent it forward. As injury time approached Heatley was clear through on goal but Blayney managed to get a hand on the ball and push it out for a corner. McClean sent the ball into the box and it was eventually put out by Forsythe for a goal kick to United. Diarmuid O'Carroll then headed towards goal but it was an easy catch for Blayney, then Cushley had another shot at goal before the referee blew the final whistle.

That was the first time Crusaders were held to a 0-0 draw at Seaview since 14th December 2013, and the first time Ballymena United have kept a clean sheet since their 1-0 win over Carrick Rangers in January.