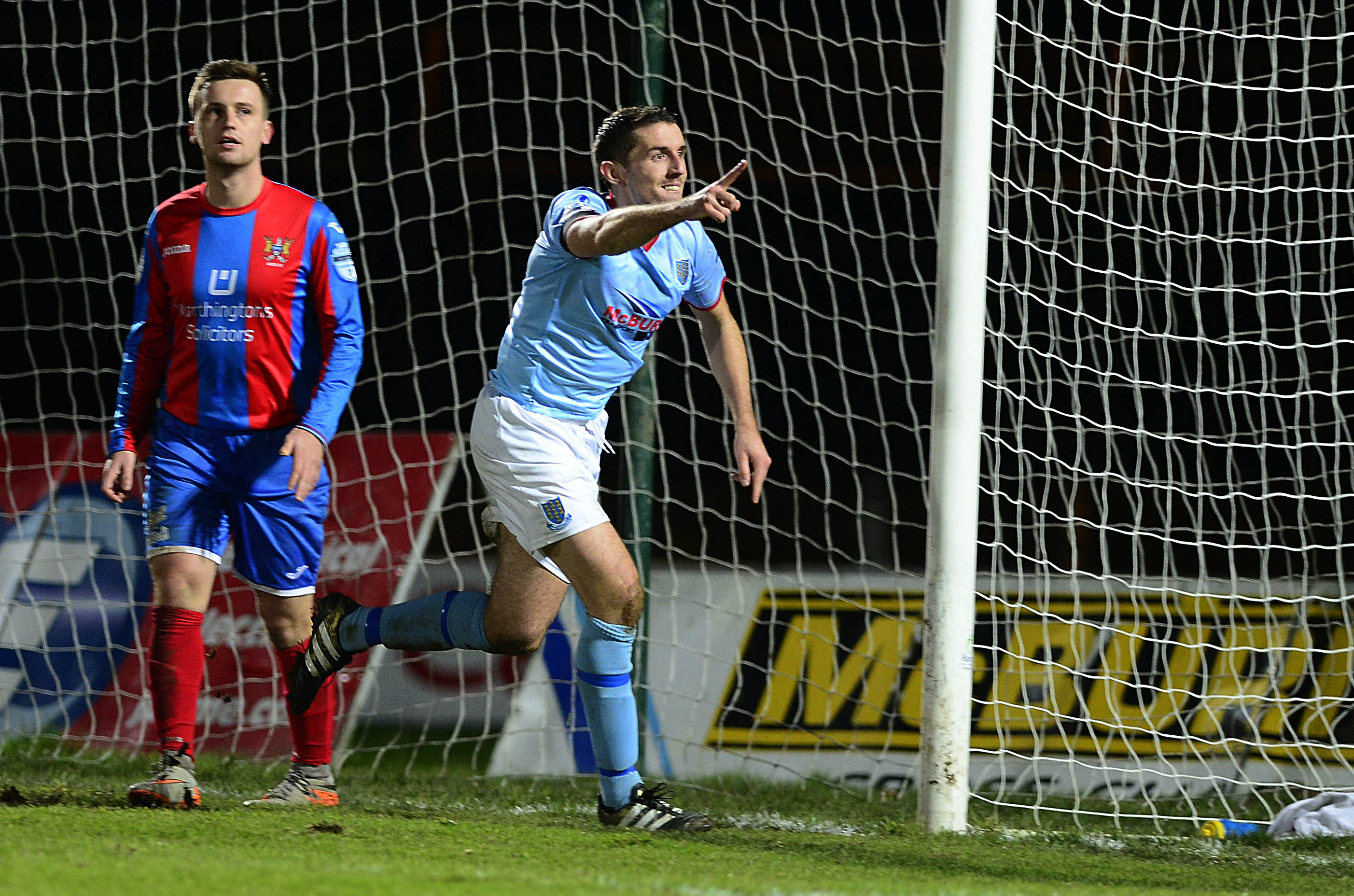 Ballymena United are two games away from retaining the League Cup after a 3-2 win after extra-time against Ards.

The first half got off to a quiet start for both sides, but Ards looked the more threathening. Ex-United man Michael Ruddy had a chance from a free kick, but could only find the arms of Ross Glendinning. Glendinning was called into more meaningful action on 11 minutes. David McAllister turned Jim Ervin and crossed for Keke, who had a header tipped over by the 'keeper. Shortly after Ards had another great chance when Jonah Mitchell played in Gareth Tommons, but under little pressure he scuffed his shot at Glendinning.

United's first chance came on 16 minutes. A stinging shot from distance from Leroy Millar was well saved by one hand of Aaron Hogg. From the resulting throw-in the ball eventually fell to Gary Thompson, who shot inches wide. At the other end, Ards went close again. Tommons had time to shoot but his shot was deflected over, with Glendinning a spectator for the shot. On 26 minutes Ards came again. Mitchell missed an opportunity to shot but still found McAllister on the edge of the box and he forced Glendinning into a good save.

With 29 minutes gone the deadlock was broken by the home side. Johnny McMurray dispossessed Johnny Taylor in the Ards half to break clear. After passing Dave Elebert, McMurray opted to play in Cathair Friel, who slid the ball past Hogg.

6 minutes later the visitors were almost level. Kofi Balmer failed to clear a Johnny Frazer cross and the ball landed at the feet of Keke inside the 6 yard box, but Balmer redeemed himself with a fantastic block. Within a minute Ballymena could've had a second but for a great Hogg double save. First up Leroy Millar sent McMurray clear but one-on-one with Hogg, the 'keeper saved well. Seconds later the ball came to McMurray again, but again Hogg came out on top.

Ballymena were inches away from going 2 up with 3 minutes left in the half. Friel made a good run to the by-line and delivered a low teasing cross, only needing a touch, but the ball passed McMurray before Tony Kane turned it wide as United held a lead over half time.

The second half almost got off to a horrendous start for Ards when former Showgrounds man Taylor turned the ball towards his own goal, forcing his own 'keeper to pull off a good save. On 49 minutes Ballymena gained breathing space by adding a second goal. McMurray flicked a corner on and it was hooked towards goal by Thompson, which Hogg saved well, but on the rebound Gary Thompson was able to turn the ball home.

It only took Ards 4 minutes to cut the deficit. Michael Ruddy dispossessed Millar and found McAllister, who in turn sent a ball across goal which looked to be bundled over the line by Keke.

The goal looked to unsettle The Sky Blues completely and Kyle Cherry almost equalised when he arrived late into the box, but his tame shot was saved. With 63 minutes on the clock Ards did find that equaliser. After Balmer blocked a Keke shot, from the resulting corner Jonathan Taylor headed home unmarked.

With Ards continuing to cause all sorts of problems from corners Elebert headed wide. Inside the final 20 minutes Keke broke through and rounded Glendinning, looking certain to score, but he took the ball wide enough to allow Glendinning to get up and made the block. From the resulting corner, Elebert went close again, this time forcing Kane to clear on the line.

After a tough 20 minutes Ballymena finally got a chance when Kane picked out Millar with a pin-point cross, but Millar's header was easily saved. With 6 minutes left a fantastic Hogg save stopped sub Kyle Owens from giving United the lead again.

A corner was cleared by Hogg to Owens, who struck on the half volley, but Hogg was on hand to save. Then in added time Hogg made an even better save. The ball dropped for an unmarked Millar inside the box and his shot looked destined for the top corner, until Hogg somehow tipped it over the bar as the scores finished 2-2 after 90 minutes.

The first half of extra time wasn't exactly a classic. 9 minutes in Cherry had time to set himself but his shot caused Glendinning little problems. David Jeffrey brought on Matthew Shevlin for McMurray to inject some new energy. In the 103rd minute of the game Kane tried his luck from distance from a free kick but despite an awkward bounce Hogg gathered.

The second half of extra time was more open. Kane had another good chance from a free kick, from closer range, but blasted well over. As Ards started to look nervous at the back, Shevlin and Kane both couldn't quite turn the ball towards goal. With 5 minutes left Owens rose highest from a corner, but headed just wide.

However with just 2 minutes left before penalties, Ballymena stole the win with a dramatic late winner, courtesy of Tony Kane. The midfielder picked the ball up 20 yards from goal and only had one thing on his mind, hitting an unstoppable shot into the top corner past Hogg, sparking big celebration in the dug out.

United easily saw out one minute of added time to make it into the semi finals of the League Cup, joining Dungannon, Crusaders and Cliftonville as Ballymena took a step closer to regaining their trophy.