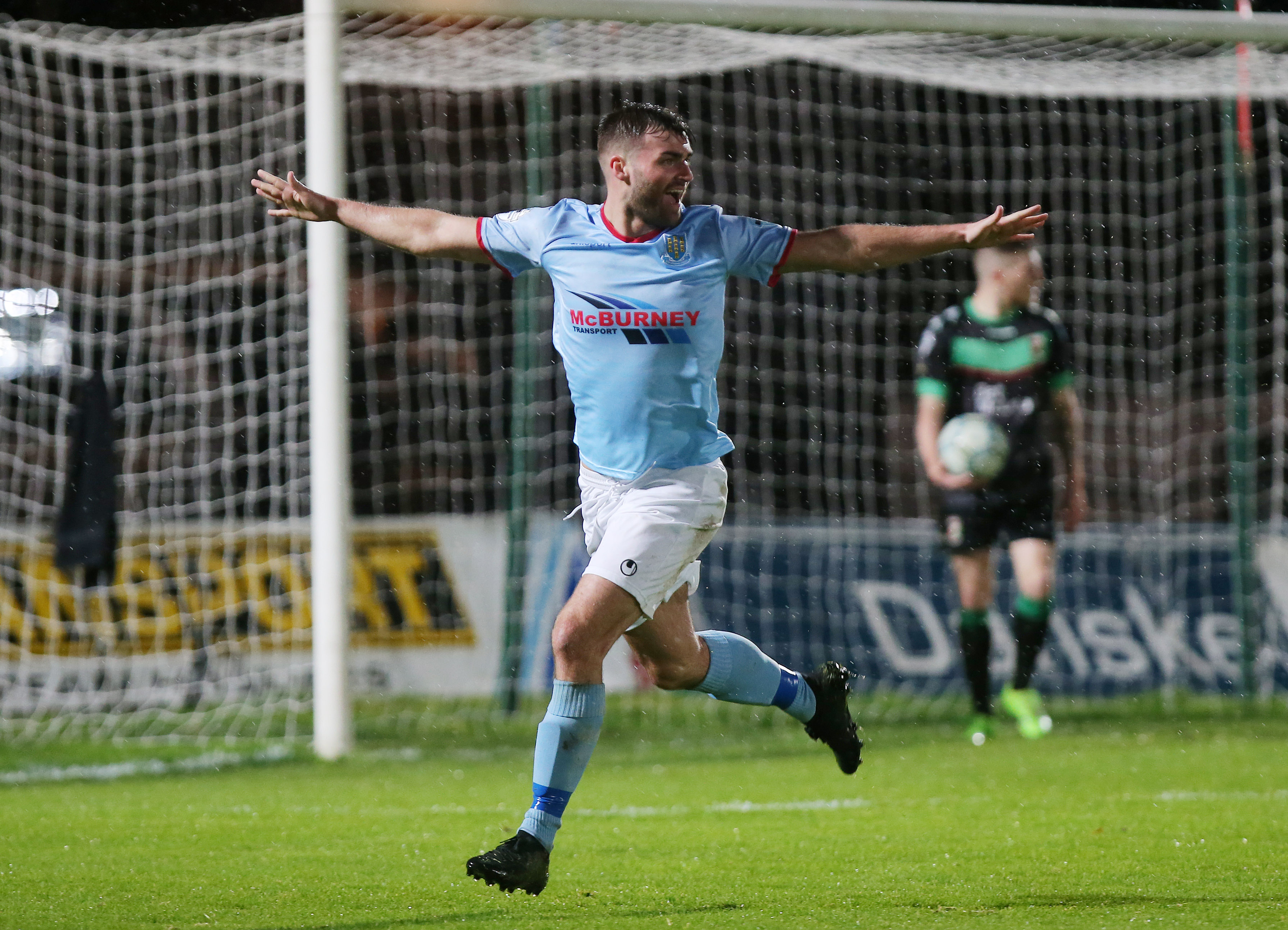 JOHNNY McMurray helped Ballymena into the Toals Co Antrim Shield semi-finals in a 1-0 win over Glentoran.

Both teams struggled early on to make an impact on an extremely wet surface. In the only chance of the opening quarter of an hour, after a scramble in the United box Daniel Kelly could only poke the ball wide from close range.

With 14 minutes played Ballymena were forced into an early change when Caolan Loughran was stretchered off after falling awkwardly on his arm near the corner flag. He was replaced by Emmett Friars, making his first appearance in a month.

After a delay for the injury, Nathan Kerr went close to opening the scoring. Kym Nelson started a quick counter attack and gave it to Kerr, who curled his effort just over. On 24 minutes The Sky Blues took the lead with their first real chance of the game. A nice one two between Gary Thompson and Jim Ervin on the right wing ended with the latter crossing for Jonathan McMurray and his first time shot flew into the top corner. It was McMurray's first game of the season after a long injury lay off.

Minutes later it was almost 2. Another good move saw Cathair Friel cross for his strike partner McMurray, who flicked the ball goalwards towards Joe McKinney, but Calum Birney did well to clear the ball in time. With Ballymena beginning to control play, McMurray went close again, with his shot on the turn being saved by Elliott Morris. As United continued to create a string of chances, Friel flicked a cross into the path of McKinney, but he could only blast over from close range.

As the half went on McMurray continued to cause The Glens all sorts of problems and went close again. After allowing an Ervin throw-in to roll across his body, McMurray's cross/shot just needed a touch, but instead ran agonisingly past the post. In added time at the end of the first half, Robbie McDaid was given time to run at the United defence and got a shot away, only for Steven McCullough to make the block as the half ended 1-0.

United came out quickly at the start of the second half and inside 2 minutes rattled the post. A long throw-in was met by the head of Friel, but he couldn't beat the woodwork before Glentoran were able to clear. Friel and McMurray's link up play from last year was evident again when Friel went in on goal following a Jonathan Addis slip. Friel opted to cross for McMurray but Morris made himself big to make the save.

The away sides first chance of the half came on 53 minutes. McKinney failed to deal with a Nelson cross and the ball fell to Curtis Allen, but his tame shot was easily gathered by Ross Glendinning. 5 minutes later there was panic in the United box when Glendinning spilled a cross and whilst trying to redeem himself, caught Allen in the box, with luckily no penalty given. The in-form Allen could've grabbed an equaliser when he met a deep cross at the back post, but the striker could only head wide.

McMurray made way on 69 minutes after an impressive first game of the season, being replaced by another returning forward, Matthew Shevlin. Inside the final 15 minutes the away side began to threaten the home goal frequently. Sub Tiarnan McNicholl got the better of Ervin but his weak attempt drifted wide. On 81 minutes defender Birney went close for Glentoran when a free kick dropped at his feet on the edge of the box, but he couldn't keep the ball under the bar.

In a rare attack at the end of the game, Ballymena almost made sure of the win when McKinney crossed for Friel at the back post, but from a very tight angle he could only find the arms of Morris. On 88 minutes McDaid looked set to grab a dramatic equaliser for The Glens when he was played through on the goal, but fortunately McDaid tripped on the ball, wasting his late opportunity.

United saw out 3 added minutes with relative ease to get back to winning ways and put their name in the hat for the semi-final draw.