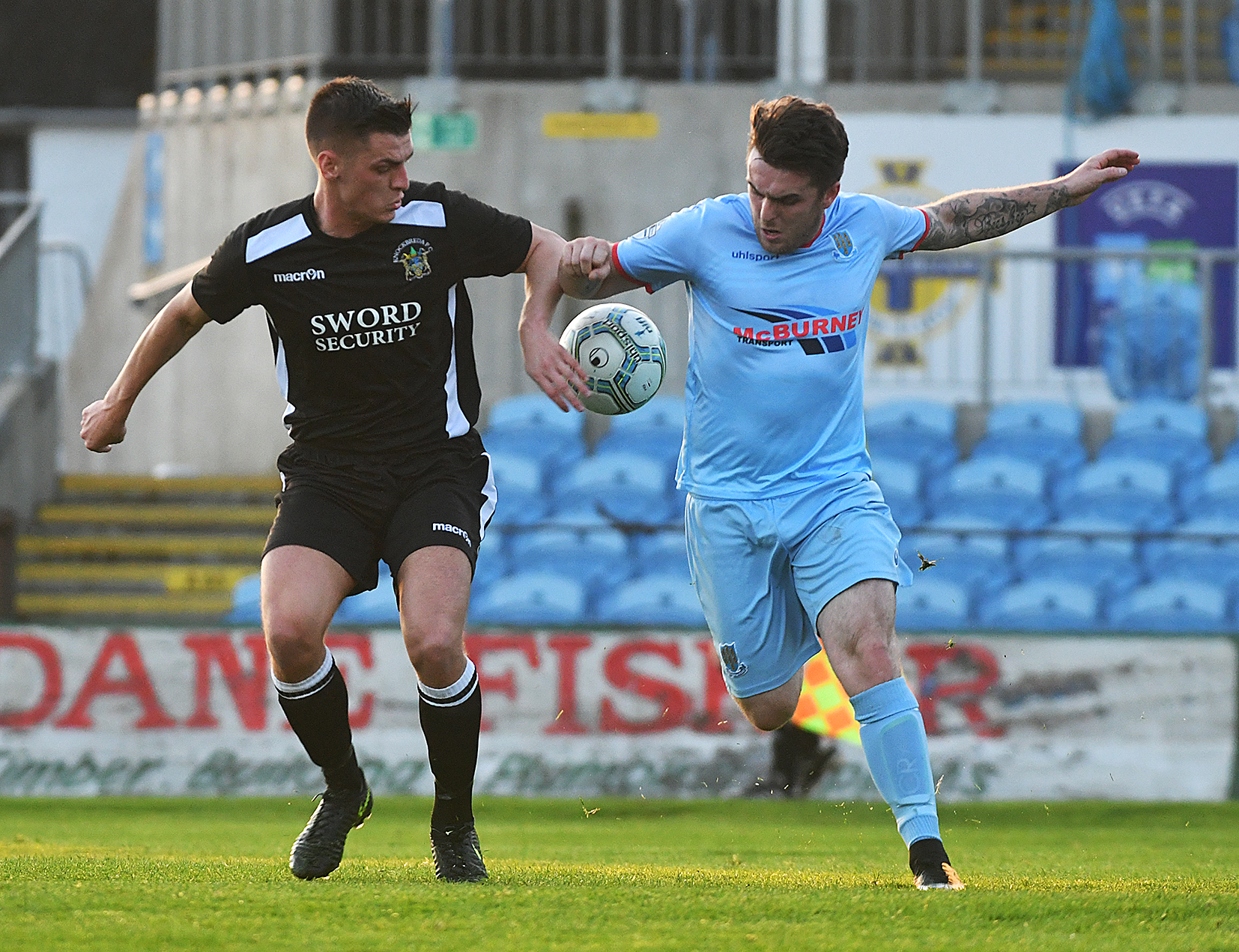 Ballymena United eased to a 3-0 win over Knockbreda in the first round of their League Cup defence.

In the first competitive meeting between the sides, United got off to the perfect start when they went in front just 32 seconds into the game, with Cathair Friel opening his account for the season. A misplaced Knockbreda ball at the back found Friel, who took his time before firing home past a defender on the line.

3 minutes later it was almost two. Fra McCaffrey won a free kick around 25 yards out and Tony Kane stepped up, only to fire his effort just over Knockbreda's crossbar.

Ballymena's pressure continued to cause the visitors problems, this time Friel's cross was cleared on the line by Daniel Culbert. The United defence was first called into action just short of the ten minute mark. A dangerous Ryan Newberry ball into the 6 yard box had to be headed over by Emmett Friars for a corner. 2 minutes later Newberry had a chance himself.

A poor clearance from Conor Brennan fell to Newberry but his long range effort went well wide. The Championship side went close again on 15 minutes. A long clearance from defence fell to Michael Moore and his shot beat Brennan, but went just wide of the post. As Knockbreda continued to threaten, Newberry fired a free kick just over the bar from just outside the box.
Ballymena went close to doubling their lead with two chances around the half hour mark.

First Joe McKinney couldn't turn home a good ball from McCaffrey and then minutes later Knockbreda 'keeper David Ferguson was called into action, coming out to stop Gary Thompson. A fantastic Brennan double save prevented Knockbreda from levelling the cup tie up. First up a neat one-two between Ryan Harvey and Mark Cooling saw the latter get a shot away, only for Brennan to save. The ball landed at Harvey's feet and his rebound looked certain to go in, only for Brennan to somehow get across the goal and make the save.

On 35 minutes, Knockbreda had an equally good chance to level when Culbert had a free header at the near post from a corner, but he couldn't keep the ball down. At the end of the first half Conor McCloskey blasted well over with an attempt from outside the box and at the other end Newberry turned Friars but couldn't keep his shot on target, as United took a narrow half time lead.

The visitors started the second half well and went close early on. Ryan Arthur attempted to chip Brennan from inside the box, but he couldn't keep his effort under the Sky Blue goal. Ballymena's first chance of the half came courtesy of McCaffrey, who had time to set himself from distance, but his effort never troubled Ferguson. 2 minutes short of the hour mark Ferguson again had to stop Thompson from netting. This time the stopper rushed out to smother Thompson's shot from 12 yards.

A minute later Ferguson did well again, stopping McKinney after he'd been played in by McCaffrey. With 25 minutes left, Ballymena doubled their advantage thanks to Joseph McKinney. The winger picked the ball up on the left and beat 3 players in the box before slotting home from a tight angle for 2-0.

McKinney could've doubled his tally for the night 3 minutes later when McCloskey got a run on the right hand side and crossed for McKinney, who headed over at the near post. As the chances began to dry up for Knockbreda, substitute Ciaran Murray had a go from a free kick from all of 35 yards, but it was easily dealt with by Brennan.

On 75 minutes a controversial decision saw Knockbreda reduced to 10 men. Despite appearing to innocently run into the linesman, Ryan Arthur was adjudged to have deliberately caught the official, resulting in a red card which surprised most of the stand.

With 8 minutes left the Sky Blues made sure of their passage into the next round when subsitute Willie Faulkner made it three. After some great build up play from United, Steven McCullough fizzed a ball across goal which landed at the feet of William Faulkner who tapped in from close range.

On 84 minutes, David Jeffrey handed a debut to new signing Daniel McIlhatton who joined the club last week from Moyola Park. McIlhatton was involved straight away when a beautiful lay off found McCloskey, but his rifled shot cannoned back off the crossbar. However Ballymena rounded off a 3-0 victory for the first win of the season and see them safely into the draw for the next round, which will take place on this weekends BBC Radio Ulster Saturday Sportsound.