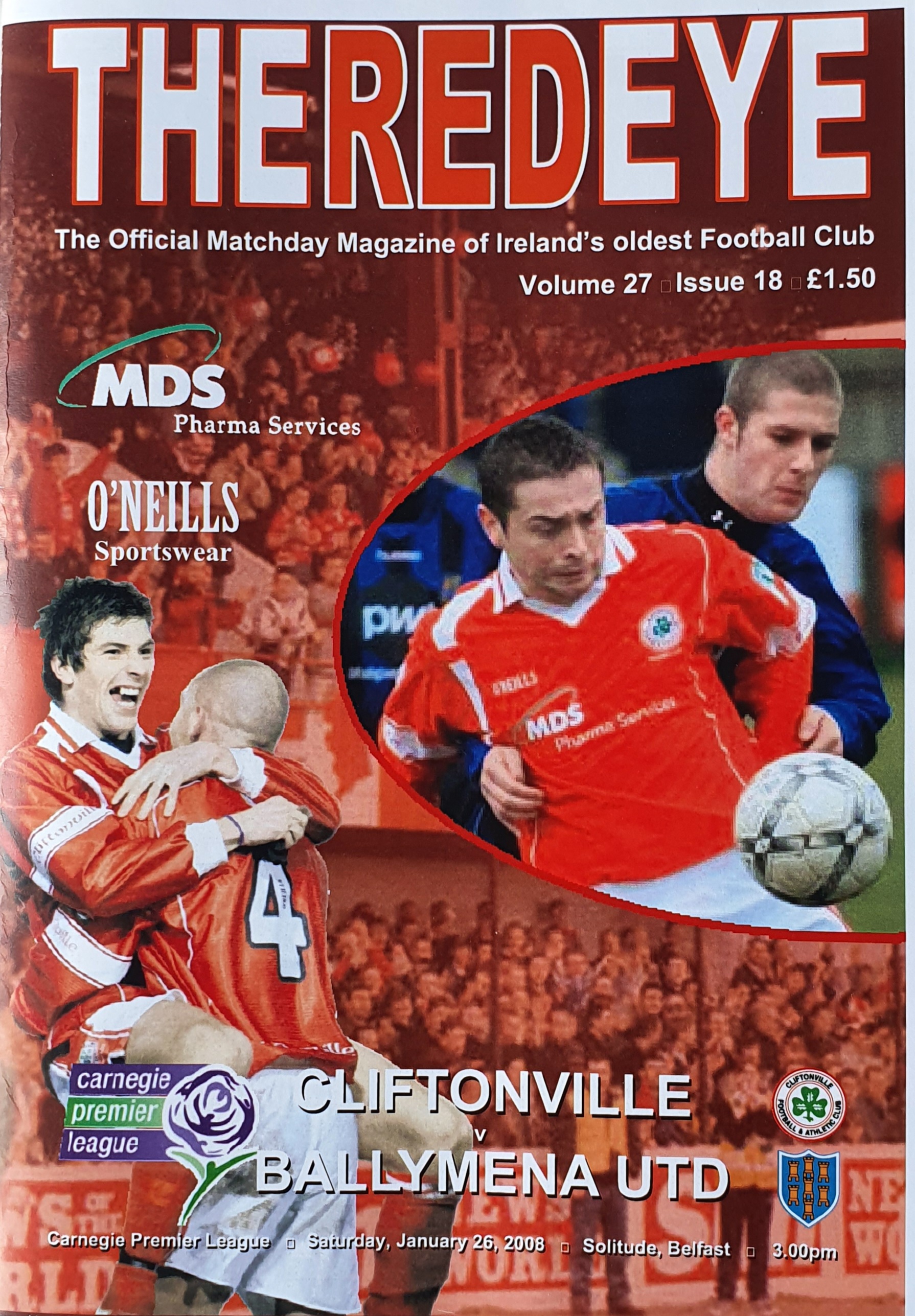 IT took a cruel, cruel goal in the third minute of injury time for Cliftonville to maintain their unbeaten league run against a plucky Ballymena United side on Saturday.

Looking to bounce back from their Irish Cup exit midweek, the Sky Blues faced an intimidating trip to Solitude to face potential league champions â€“ Cliftonville.

However, it didn't seem so intimidating five minutes into the game when the visitors took a surprise lead.

Garth Scates floated in a corner and Kevin Kelbie rose unmarked to head the ball under the outstretched body of Reds' goalkeeper â€“ John Connolly. This was the Scottish forward's 12th goal of the season.

Cliftonville pushed forward quickly in search of an equaliser, however when Ronan Scannell fell to the ground in the box; his reward when he came to his feet was referee Mark Courtney standing over him with a yellow card in hand for a blatent dive.

The home side did get their spot-kick though a few minutes later, when Craig McClean's fairly innocuous challenge on the other Scannell, Chris, left the referee pointing to the penalty spot.

United had conceded all four of Newry's penalties in the midweek shoot-out - but Paul Murphy was equal to David McAlinden's poor strike, and recovered the ball despite McAlinden's dangerous attempt to get the rebound.

Despite a knock to the head, Murphy was seemingly in unstoppable form, as he brilliantly saved George McMullan's long range effort at full stretch. While his defence was called on to make two goal-line clearances.

Against the run of play, Ballymena very nearly struck a second goal â€“ when Davitt Walsh broke free to cross the ball to Simon Kelly. The big Dundalk defender seen his powerful header crash off the far post with Connolly stranded.

The Cliftonville pressure was relentless though and they finally grabbed their equaliser on 32 minutes.

Poor marking from Francis Murphy's corner allowed Declan O'Hara to bundle the ball home and allow the Solitude side back into the game.

Simon Kelly's timely intervention stopped Cliftonville having another chance, whilst Francis Murphy's effort was blocked by his own player as the Braidmen were just about holding on going into the break.

On 59 minutes, the already pulsating game took another dramatic twist.

Stuart King played Davitt Walsh through and as the former Bohemians striker - who signed permanently this week with United â€“ went to pull the trigger, Ronan Scannell made a timely last-ditch tackle to prevent a certain goal.

However, straight up the field the home side went from the loose ball, and George McMullan found Mark Holland who placed his shot into the corner, giving Paul Murphy no chance to put the Reds in the lead.

The drama wasn't over though and on 72 minutes United drew the scores level again, as Stuart King's corner was only palmed by the goalkeeper as far as Thomas Wray who forced the ball home at the near post for his first Ballymena United goal.

It stayed level until the third minute of stoppage time when a very tired looking Ballymena side allowed Francis Murphy space to shoot from outside the box.

His shot bobbled on one of the many divots of the terrible Solitude pitch, and agonisingly bounced over the outstretched glove of his namesake and into the back of the net as the North Belfast venue erupted.

United boss, Tommy Wright, was sympathetic with his goalkeeper after the late goal.

"The pitch played a big part in the goal. The keeper didn't deserve that. He had kept us in the game with some good saves," Wright said.

"I didn't want to say too much, but that pitch is sub-standard and I am sure Eddie Patterson would agree with me. We allowed Murphy to come inside onto his good foot and gave him the opportunity to shoot. A few of our lads will not play that badly again.

"It was always going to difficult and I thought Cliftonville adapted to the conditions better then we did. Some of the players did not do what was asked of them and we did not play in the parts of the pitch that we wanted to.

"We let them have too many chances and I am disappointed with the performance. The pitch didn't suit us, and to be fair it didn't suit Cliftonville's style of play either. We are disappointed to lose, but hopefully we can get on another run starting on Friday,â€ he added.â€

Ballymena are back in action next Friday night against Portadown at Shamrock Park.