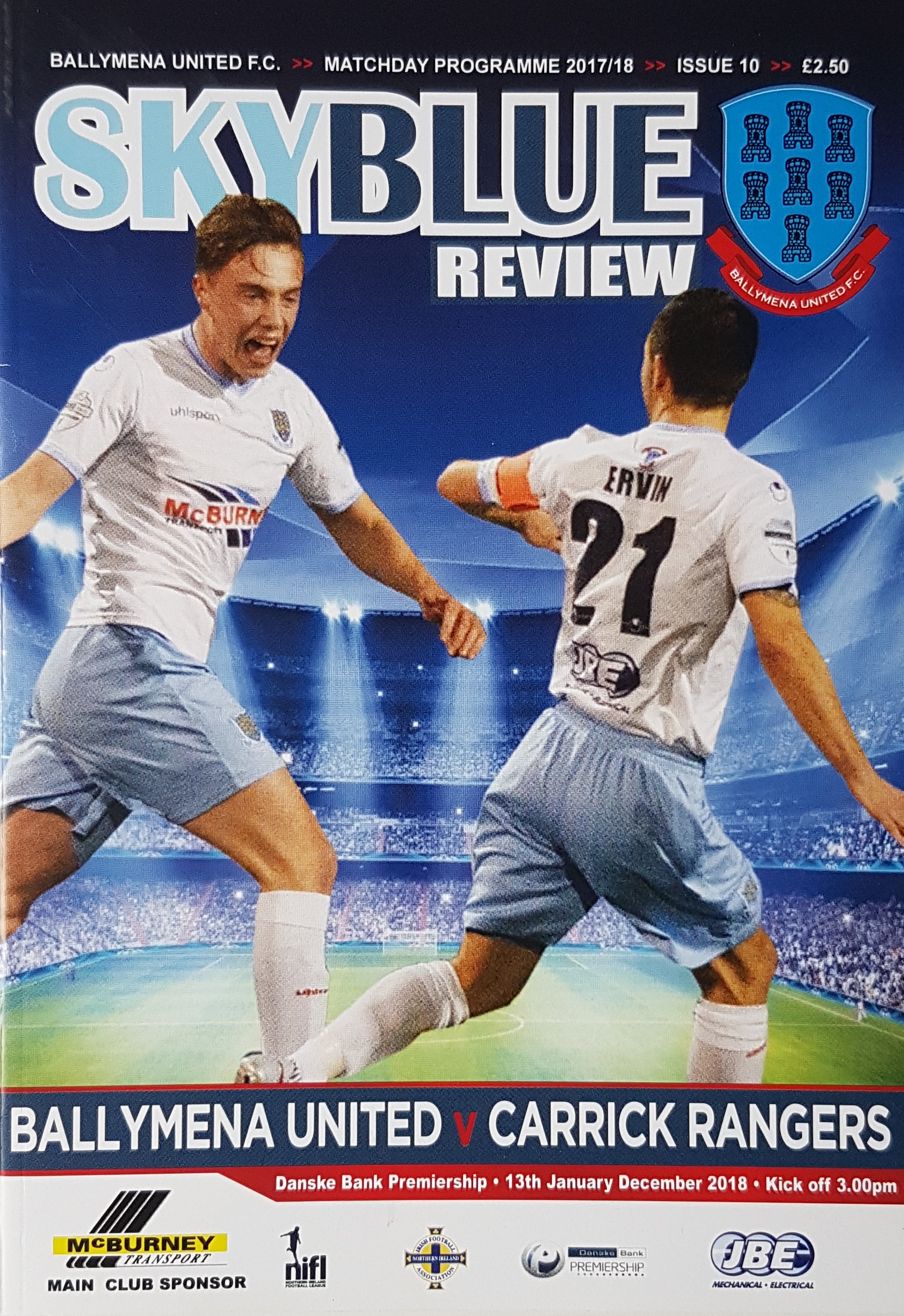 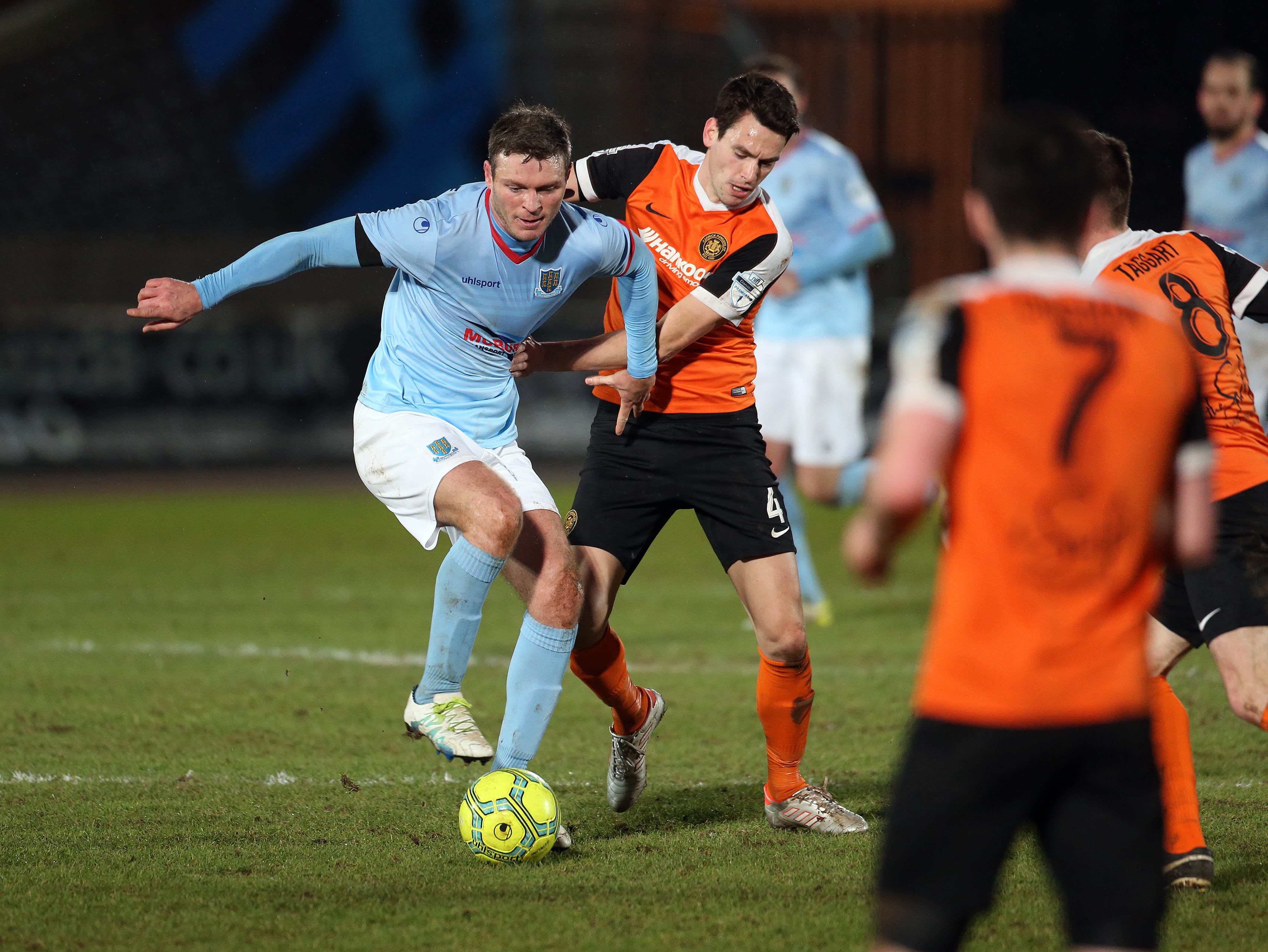 Kevin Braniff scored twice in the second half to help Ballymena United on their way to a 3-0 home win over Carrick Rangers.

A minute's silence was impeccably held prior to kick off in memory of lifelong Sky Blue fan Tommy Matthews, who sadly passed away after taking ill at last weeks Irish Cup game.

The midfielder had plenty of time to shoot on the outside of the box, but his shot was high and wide. Kevin Braniff probably should've scored a couple of minutes later. A Tony Kane throw in made its way to Shevlin and his ball across goal was put over by Braniff from close range.

Harry Doherty was called into his first piece of action when he was forced to stop McKinney after Shevlin did well to chase down Denver Gage. In the next attack United won a corner which Kyle Owens header inches wide. At the other end Andrew Mooney did well to work a shot, but under pressure he shot just over Ballymena's bar. After Carrick had a penalty appeal turned down early on, the home side had a stronger shout waved away by Raymond Crangle after Shevlin went down under a challenge from Damien McNulty.

Ross Glendinning made his first save of the game on 34 minutes. Lee Chapman did well on the right wing and crossed for Gavin Taggart who had time in the box, but Glendinning did well to tip over. With chances less frequent than in the opening 20 minutes, another dangerous throw in from Conor McCloskey was flicked on by Owens to Braniff who had his effort cleared on the line before Shevlin could get to it. McCloskey was involved again shortly after when he cut in from the left and fired a low, awkward shot at Doherty, who had to tip it round the post as the half ended scoreless.

The second half took a while to get going with an angled shot from Mooney easily caught by Glendinning in the only chance of note till the 58th minute, when United broke the deadlock. It was a familiar combination again as a long McCloskey throw in was flicked on by Owens to Kevin Braniff, who made no mistake in heading the ball past Doherty from 6 yards.

The goal sparked a mini response from The Amber Army. Chapman did well to hurdle a challenge from Stephen McAlorum and had a go from distance, his shot deflecting off Owens and going just over the bar. On 69 minutes The Sky Blues widened the margin with a second goal. Kevin Braniff picked the ball up on the edge of the box and from nothing scored his second of the day, flicking the ball delightfully over the defender's head before finishing neatly into the bottom corner.

With the second goal deflating the visitors, Ballymena came on strong with chance after chance. Good play from McKinney allowed McCloskey to break and with Braniff right and Shevlin left he opted for the latter, with Shevlin's shot being stopped by the hand of Doherty. With 13 minutes left it should've been 3-0. McCloskey capitalised on an error by McNulty and raced clear one on one, but the winger placed his shot wide of the post.

Braniff was probing for his hat trick and had two good chances in the final 10 minutes. First up, he hit an effort straight at Doherty after good play by Fra McCaffrey. Minutes later McCloskey broke on the counter and played in Braniff who tried to lift the ball over Doherty, but instead lifted it agonisingly wide of the post.

Carrick could've been reduced to 10 men late on when sub Mark Surgenor appeared to kick out at Kofi Balmer, but the ex-United man escaped with just a yellow. Inside added time Ballymena still had time for a 3rd goal. Kane flighted a fantastic long ball into the path of substitute Willie Faulkner, who held the ball up well before finding Shevlin, whose shot took a slight deflection on its way into the bottom corner, Matthew Shevlin making it 7 for the season as United stretch their unbeaten home form to 13 games.