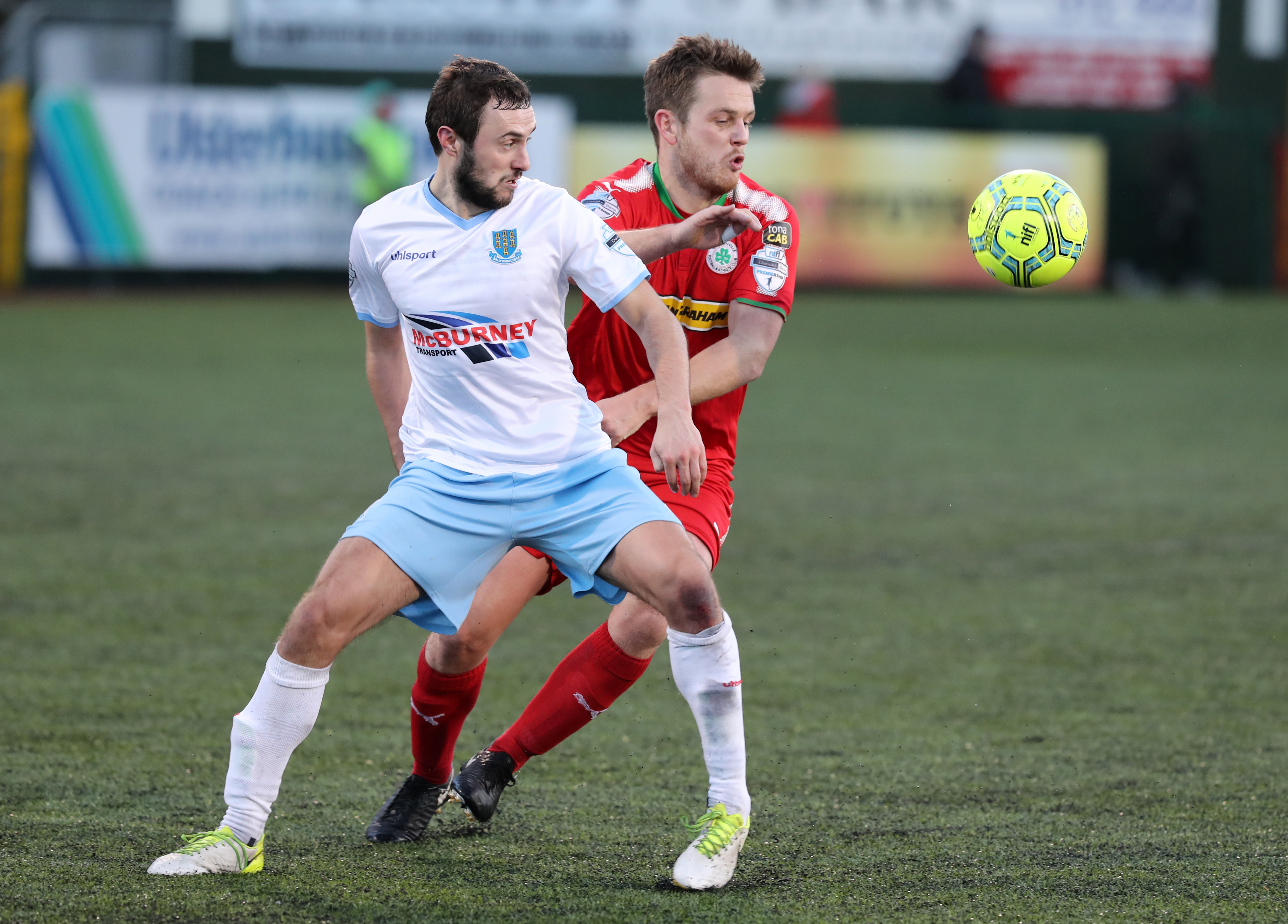 A single goal from Stephen Garrett was enough to give Cliftonville a 1-0 win over Ballymena United at Solitude.

It was a fairly even start to the game with most of the opening quarter of the match being played in the middle of the park in a bitterly cold North Belfast. The first chance of the game fell to the visitors. A shot from Gary Thompson was blocked, but only as far as Conor McCloskey, who in turn dragged his effort wide. It took until the 12th minute for Cliftonville to really threaten United's goal. Chris Curran made a good run into the box and sent a dangerous ball across goal, being narrowly missed by the onrushing Garrett.

Ballymena's defence was tested on 15 minutes by another dangerous ball, but Emmett Friars was equal to it. This time Rory Donnelly provided the ball and Joe Gormley looked certain to tap home, only for Friars to make a great clearance in time. With both sides continuing to be evenly matched, Cathair Friel had two chances to get a shot away. His first effort was blocked and on the rebound Friel's half volley went high and wide.

Tony Kane went agonisingly close twice inside 3 minutes for The Sky Blues. First up, Kane was teed up by Gary Thompson, but his dipping shot from the edge of the box went just over the bar. United then won a free kick 25 yards out, which Kane took. His attempt was almost a carbon copy of his chance 3 minutes prior, dipping just over. As United began to take a hold on the game, a quick counter attack ended with a tenacious Friel crossing for strike partner Johnny McMurray, but he failed to connect with the ball at all.

On 35 minutes Ballymena couldn't have came closer to going ahead as McCloskey struck the post. Fra McCaffrey did well to win back possession in a 50/50 and he found McCloskey, who had time to pick a spot, before seeing his shot come back off the post and into the arms of a grateful Brian Neeson. 5 minutes later the Cliftonville woodwork was hit again. A poor clearance from Neeson fell straight to McMurray and from distance he took the shot on, with the ball rattling the crossbar before going over.

With United looking the more likely to score before the break, the home side almost nicked a goal. A deep free kick from Levi Ives to the back post seemed to hit Kane last, forcing Ross Glendinning to make a smart save. With the last play of the half a good move from United ended with McCloskey picking out McCaffrey in the box, but he headed just over as the half ended scoreless.

Just like in the first half, the second was even for the opening minutes. The first chance came the way of Rory Donnelly, but he could only blast over from outside the box. At the other end a deep throw in from McCloskey was cleared by Jay Donnelly, only as far as McCaffrey who hooked the ball back towards goal and with Neeson scrambling, the ball landed on the roof of the net. As the half progressed Cliftonville began to seize control of play. Garrett began a quick break and found Rory Donnelly, whose shot was blocked by Kofi Balmer for a corner. On the third attempt at a cross from the corner the ball came to defender Garry Breen, who could only head wide.

On 55 minutes Glendinning was forced into a fine save to deny Gormley. The forward did well to turn Steven McCullough and get his shot away, only for United's 'keeper to brilliantly tip the ball over. Minutes later Gormley went close again. This time he chased down a long clearance before flashing a shot just wide. On 62 minutes Glendinning was called into action again. Jude Winchester had the time to get a shot away and his effort was spilled by Glendinning, before being cleared. With 22 minutes remaining Ballymena somehow managed to keep The Reds out. Winchester delivered a menacing low ball across goal and Gormley's shot was blocked by Glendinning at point blank range before Jim Ervin cleared on the line.

On the 70 minute mark United's resistance was broken as the home team broke the deadlock. Rory Donnelly, similar to McCloskey in the first half, had a go from the right and his shot came back of the post, but the rebound landed at the feet of Stephen Garrett, who fired into the empty goal from close range.

David Jeffrey turned to the bench, bringing on Willie Faulkner, Joe McKinney and Matthew Shevlin to try and find an equaliser. Inside the final 10 minutes United pushed hard to level and Shevlin came closest, poking a header back across goal from Kane just over the bar. In the dying minutes a shot from Kane was deflected inside the box and could've gone anywhere, but luckily for the home team fell to Neeson as Cliftonville ended Ballymena's 6 game unbeaten run.