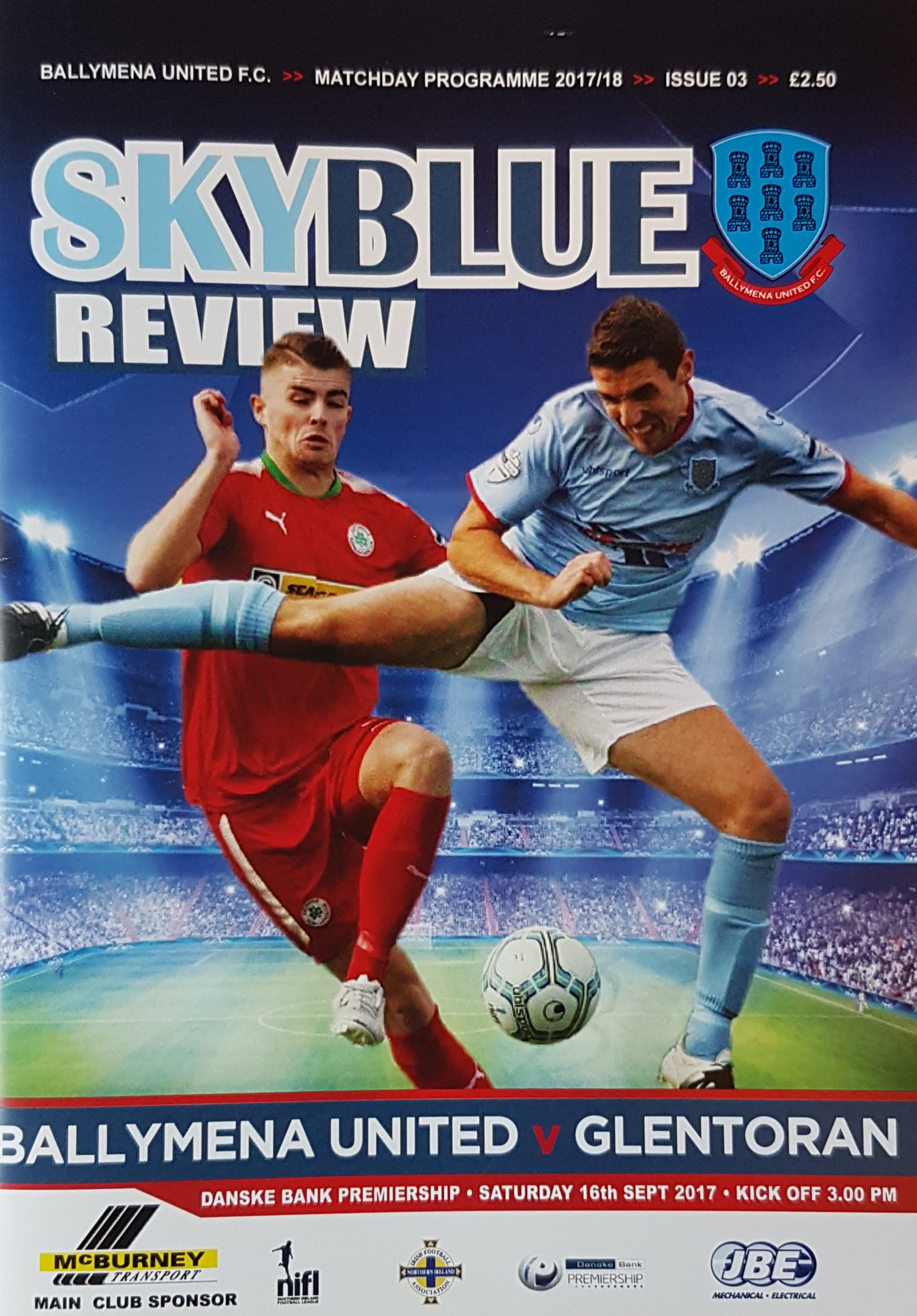 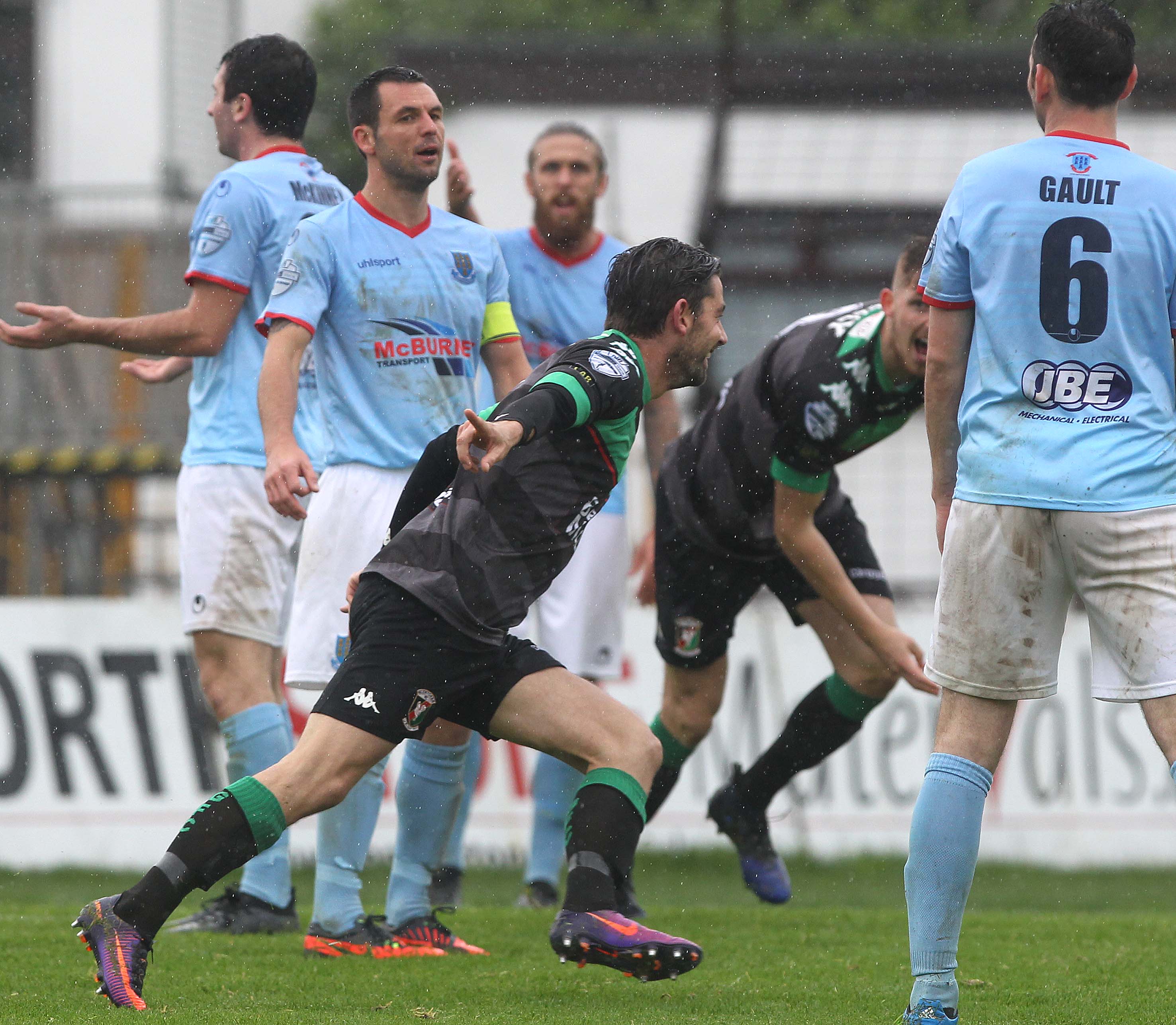 Ballymena United's winning streak came to an end with a 3-1 defeat to Glentoran at The Ballymena Showgrounds.

The Sky Blues' original starting XI had to be altered when Emmett Friars was injured in the warm up, being replaced in the side by Johnny Flynn. United got off to a promising start but it was The Glens who created the first chance of the game. Striker Curtis Allen tried from outside the box but his low shot was easily gathered by Conor Brennan.

Ballymena's first chance couldn't have came closer to opening the scoring as Conor McCloskey rattled the crossbar. Kevin Braniff slipped in McCloskey who took a touch to set himself, but his shot clattered onto the bar before being cleared. With United continuing to control play, Elliot Morris was called into action to stop Cathair Friel inside the box.

With 20 minutes played Ballymena had a huge penalty claim waved away. A weak back pass from Calum Birney allowed Friel in, and whilst scrambling to get the ball back Birney appeared to bring down Friel in the box, but referee Ian McNabb wasn't interested. Seconds later Birney was booked for a crunching tackle on Stephen McCullough.

The Sky Blues continued to press and Kyle Owens went close, heading over from a Braniff cross. It proved to be Braniff's last play as an injury meant he had to be replaced by Joe McKinney on 27 minutes. Just before the half hour mark Glentoran went close with a rare chance, with John McGuigan's cross/shot needing to be headed off the line by Tony Kane.

However, a minute later the visitors did break the deadlock courtesy of their captain Marcus Kane. A floated free kick wasn't dealt with by Brennan who failed to clear and Marcus Kane was on hand to head home for 1-0.

Glentoran were close to making it 2-0 within 2 minutes of their first when the ball dropped kindly for Robbie McDaid in the box, but he fired over. United skipper Jim Ervin almost matched his Glentoran counterpart with a goal of his own when he stung the palms of Morris with a shot from just outside the box and Friel couldn't keep his follow up down. On 40 minutes Ervin tried his luck again, this time from all of 30 yards, but this time his effort drifted just wide. Inside the final minutes of the half McCullough found McCloskey at the back post with a dangerous cross, but McCloskey's header into the ground was palmed away by Morris as Glentoran took a lead into the break.

Ballymena, like in the first half, started brightly in the second half and an influential Friel did well to get past Ross Redman but from a tight angle he caused Morris no problems in the Glens goal. Quick feet from McKinney allowed Gary Thompson a chance but his low shot lacked any real pace as Morris again easily gathered.

Glentoran's first chance of the second period fell to James Knowles, but his shot went inches wide after a slight deflection of Flynn. Right on the hour mark Glentoran doubled their advantage thanks to Allen. McGuigan whipped a cross in at the second attempt and it was met by the head of Curtis Allen who nodded past Brennan.

It only took the home side two minutes to hit back and cut the deficit as The Sky Blues made it 2-1. Kane was able to keep a long McCloskey throw-in in play and he hooked it back to Thompson whose shot rebounded to Cathair Friel, who then fired home from close range to make it 3 goals in 2 games.

The goal gave Ballymena even more purpose and Friel almost had a brace on 72 minutes, controlling the ball on his chest before shooting straight at Morris. On 73 minutes McCloskey found the crossbar for the second time in the game. A first time cross from Kane found McCloskey but his header hit the bar and over the Glens goal.

With just over 10 minutes left Glentoran looked to try and sure up the 3 points as Jonathan Addis jumped highest from a corner but Brennan saved well before Birney headed into the side netting. On 83 minutes though Glentoran did find their third. A crossed free kick from John McGuigan on the left hand side went straight over Brennan's head and into the top right corner as Glentoran scored against the run of play.

Ballymena looked to try and set up a grandstand finish with Owens heading a corner at Morris and Kane curling an effort just over the Glens bar. However it was Glentoran who went the closest for a fourth when an improvised overhead kick from sub Steven Gordon came back off the post.

Despite a solid showing from The Sky Blues Glentoran held out for a 3-1 win to widen the gap between the sides to 7 points.