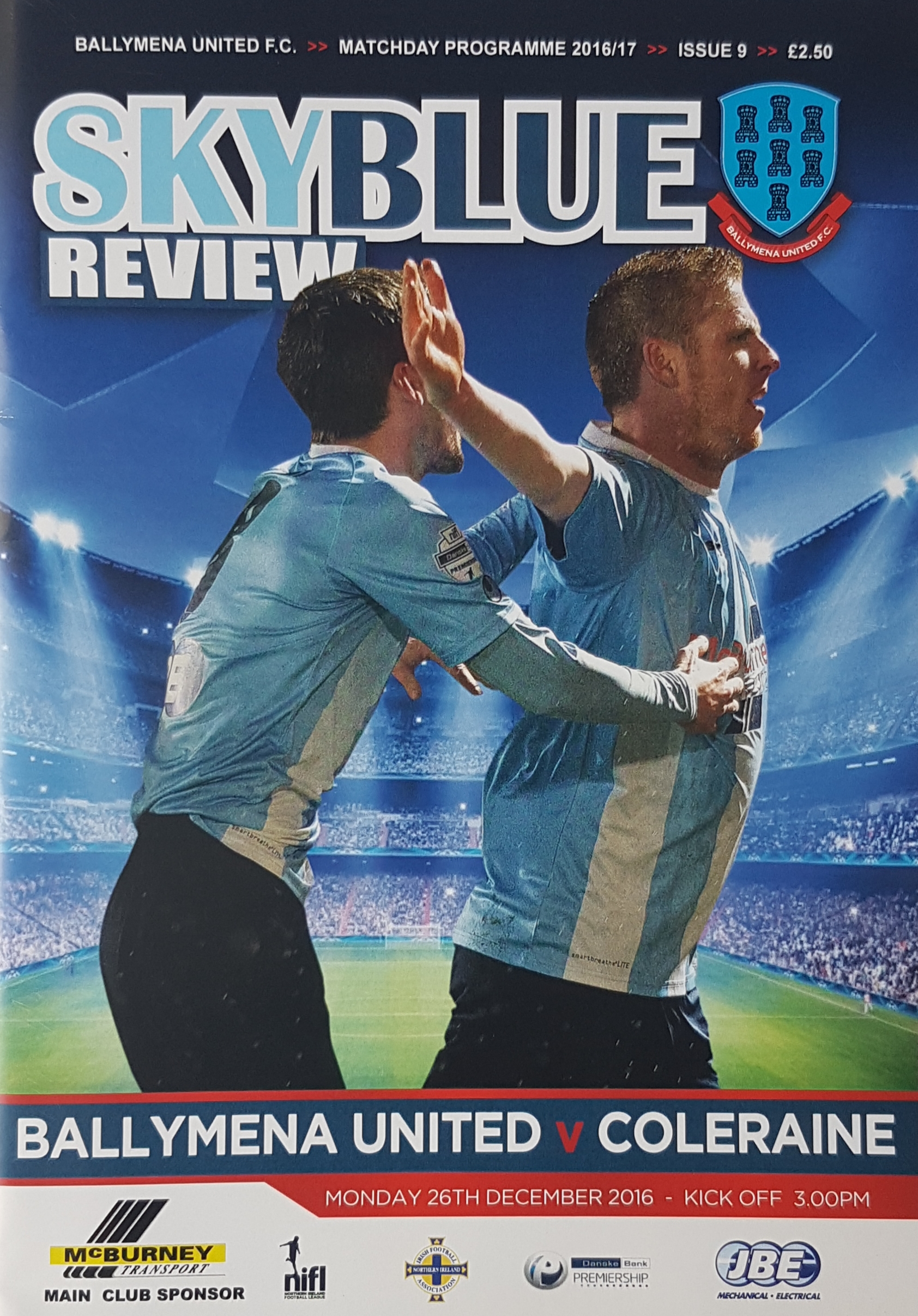 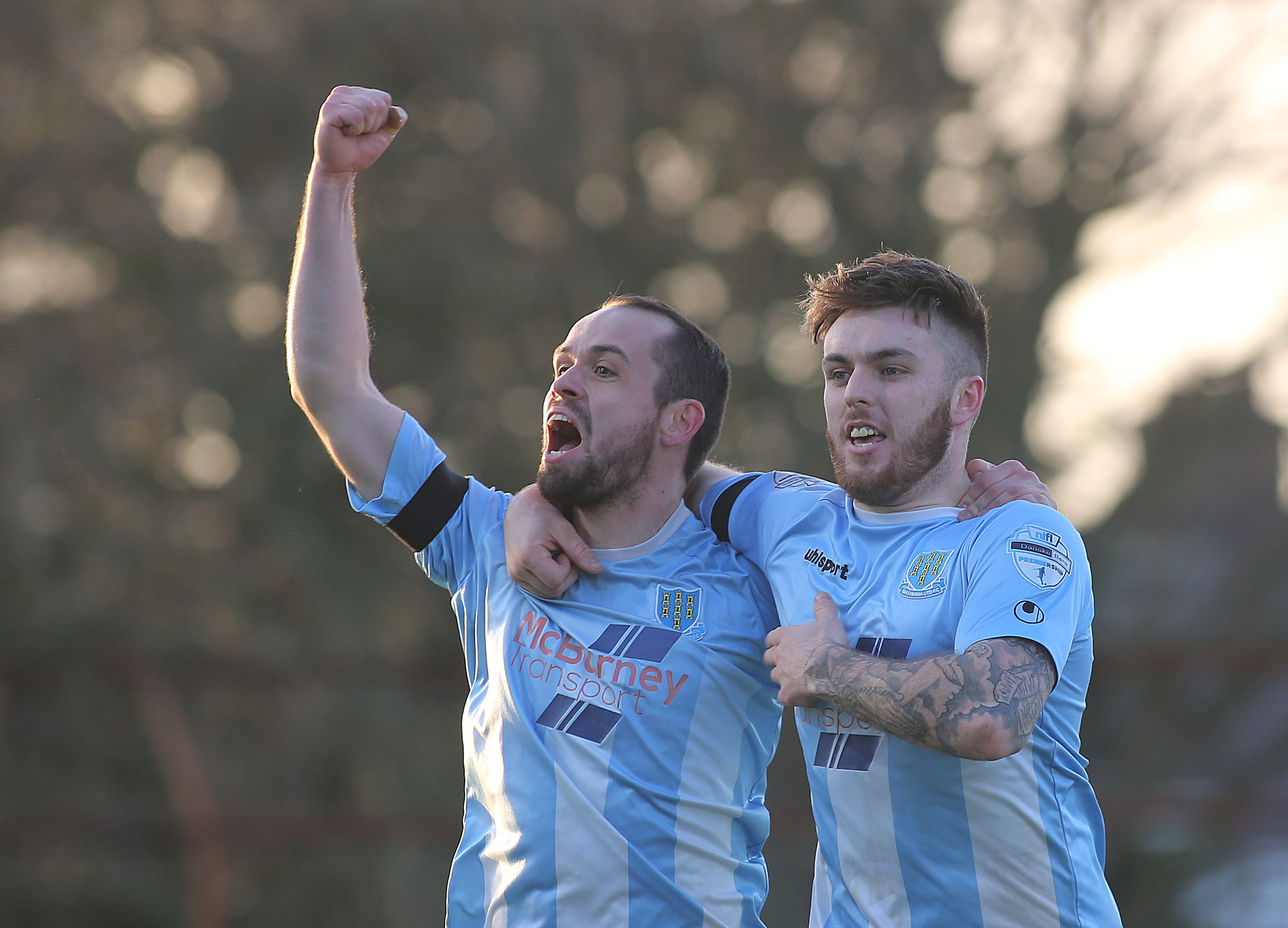 Ballymena United made it back to back wins over Coleraine with a 2-0 victory in the Boxing Day Derby at Ballymena Showgrounds.

The opening minutes of play were understandably tense in front of the sold out, and boisterous, Sky Blues support. A Tony Kane free kick just 3 minutes in was met by Cathair Friel, but he couldn't keep his header down. The tension was broken on 11 minutes when United took the lead. Johnny McMurray had an effort deflected wide for a corner, and although Coleraine initially dealt with it, Kane's second cross was met at the near post by Cathair Friel and beat Chris Johns in the Bannsiders goal. The goal took Friel onto 12 goals for the season in the league.

Coleraine created their first real chances of note after United's opener. A corner was flicked on towards Ballymena's goal and Ross Glendinning had to react to prevent the ball crossing the line. Then on 22 minutes, Coleraine had arguably their best chance of the half. An attack down Coleraine's right hand side eventually saw the ball fall to Darren McCauley who was unmarked 12 yards from goal, but he blasted his effort over the bar. It was then Ballymena's turn to go close. A corner after 24 minutes was cleared off the Coleraine line after Caolan Loughran had got his head to the ball.

Both sides then had chances in the final 5 minutes of the half. Coleraine went close from a corner when Brad Lyons jumped highest, but his header went wide of the target. Ballymena's chance led to their second goal of the game on 44 minutes. Friel did well to turn inside to create a shooting opportunity, but was unlucky to see his shot clatter the post. However, the ball kindly fell to William Faulkner who teed up Tony Kane, who unleashed a stunner from 25 yards that left Johns with no chance and doubled United's advantage.

Coleraine came out the brighter side at the start of the second half as Ballymena took a while to get going. Inside the first minute of the half Ian Parkhill tried his luck from outside the box, but Glendinning got down well to parry the shot out before United cleared. Just 2 minutes later Coleraine went close again through Jamie McGonigle. The striker was found inside the box by Lyndon Kane but his volley went well over the bar. It was McGonigle who again went close on 51 minutes, as he turned and beat numerous United players before sending a shot just over the bar.

After a tame effort by Friel was easily taken by Johns, Ballymena had the ball in the back of the net on 60 minutes through Fra McCaffrey, but the goal was rightfully ruled out for offside. 2 minutes after McCaffrey's disallowed goal, McCauley almost pulled a goal back for Coleraine when Glendinning saw his low deflected effort late, but he was still able to make the save. Inside the final 15 minutes McGonigle was involved in more Coleraine chances. United captain Jim Ervin did well to get to the ball on the line before McGonigle could tap home a consolation goal. Then with 11 minutes left to play, Tony Kane was easily beaten on the wing by McCauley and his cross again fell to McGonigle, who again blasted over.

Ballymena could've killed the game off on 82 minutes through McMurray, but his glancing header did little to trouble Johns. With 1 minute left of normal time, McGonigle should've set up a grandstand finish when he broke free to find himself 1 on 1 with Glendinning, but the striker put it wide as Ballymena went on to complete the 2-0 Boxing Day win to the delight of the home crowd.