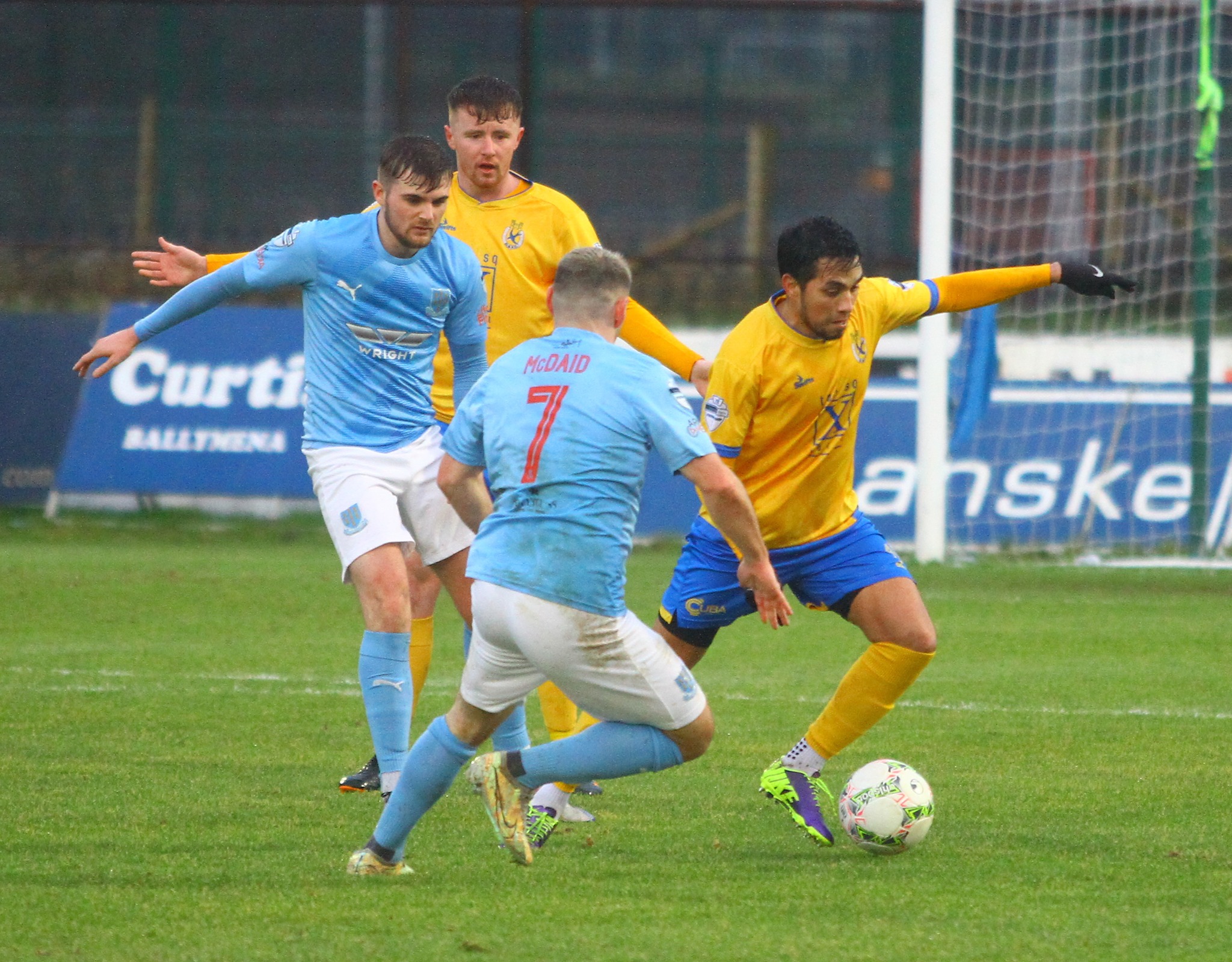 Second half goals from Andrew McGrory and David McDaid helped Ballymena United maintain their unbeaten start to 2023 with a 2-0 victory over Dungannon Swifts at a rain swept Showgrounds on Saturday.

There were three changes for United from the side that eventually started last week's Irish Cup tie at Carrick, with transfer business, suspensions and injury returns contributing to Kym Nelson, Steven McCullough and Andrew McGrory coming back into the starting XI.

On a wet, windy and freezing cold Warden Street, the opening half didn't do much to lift spirits in the stands, but it was a half Dungannon edged. Inside five minutes, Ethan McGee walked his way through United's defence before seeing a shot blocked, and ten minutes later after vibrant Swifts penalty appeals were waved away, Ben Cushnie should've done better as he blasted over from six yards.

With Dean Shiels' men still controlling more of the play, after Nelson had looped a header onto the roof of the net, the visitors wasted another golden opportunity. A cross from the right via McGee looked to be easy pickings for Sean O'Neill, but as he awkwardly spilled the ball it fell to Cushnie at close range again, who must've been surprised to get the chance as he somehow hit it straight at O'Neill who made a save he perhaps knew little about.

Dungannon found themselves often with space in between United's back line and midfield, and from two similar areas with loads of time, ex- Sky Blues Joe McCready and James Knowles let fly, firing over and straight at O'Neill respectively.

In between those two Swifts sighters came Ballymena's best chance of an otherwise fairly quiet half. A free kick dropped to Douglas Wilson who was able to get a shot away, but Dwayne Nelson was out quickly to smoother the effort, as a workman like half ended scoreless.

The second half saw less chances than the first in another damp forty-five minutes, but the Braidmen noticeably picked their play up and seven minutes in had a chance to break the deadlock from the penalty spot. Jordan Gibson's delightfully scooped ball over the top was latched onto by McDaid, who was brought down by McGee as he went to shoot. It was Andrew McGrory who got hold of the ball, and he made no mistake from the spot as his perfect penalty found the top corner to get United up and running.

Following the opener, Ballymena looked the more likely as they began to take hold of the game, but both keeper's could've taken a seat with nothing by way of chances. Three changes in fairly quick succession saw David Jeffrey MBE instill fresh legs for the final ten or so minutes, with Jack Henderson and Kenneth Kane both introduced, as well as Robert McVarnock, who replaced goalscorer McGrory to make his Ballymena United debut at full back.

In the final five minutes the away side put United under the pump as the hosts began to retreat and Dungannon peppered the back line with crosses and long balls. For the majority of them Ballymena stood firm to deny any real effort on O'Neill's goal, but the one that did come was a huge let off as sub Rhyss Campbell smashed over a close range chance.

Gibson had been doing a fine job as the game entered five minutes of added time in keeping Ballymena up the pitch and taking the sting out of Dungannon, and with the last play of the game he set McDaid up to secure the three points. As Dungannon pushed men forward they were caught on the counter, with Gibson getting onto Joshua Kelly's ball and duking past his man before laying the ball across goal on a plate for David McDaid, who made no mistake with a comfortable finish.

Another hard fought three points for United on a day not conducive to glittering football weather wise, but its now six home wins in seven league games as Ballymena move back into 7th spot.