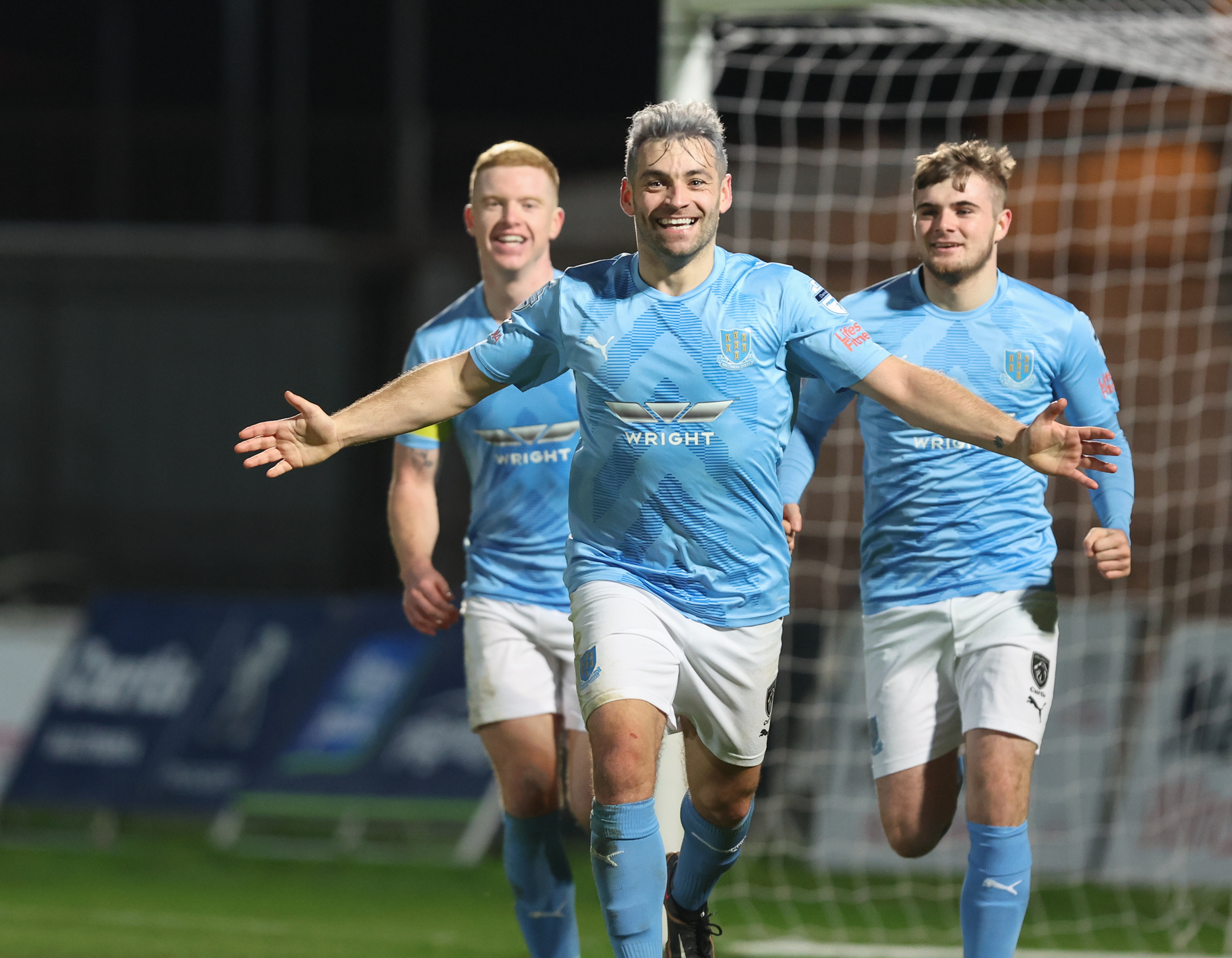 David McDaid produced a display to remember to help a sensational Ballymena United to a 4-1 victory over Cliftonville at the Showgrounds on Saturday afternoon.

After picking up three points on the road at Carrick last time out, there was just one injury enforced change for David Jeffrey, as Steven McCullough came back in to replace Evan Tweed.

With both teams in a decent run of form, it was the title chasing visitors who had the better chances early doors, as Ronan Hale saw shots deflect wide and over, before a real good chance for Joe Gormley ended with his deflected effort being well saved by Sean O'Neill.

Despite not seeing the early chances fall their way, United had started well, and eventually their tidy passages of play began to yield openings. Michael Place did well to pick out Ross Redman, who had roamed into the box, but his header produced a good stop out of Nathan Gartside.

Another really nice move ended with Kym Nelson dragging a shot to the far post just wide, before Jordan Gibson fired over, but on thirty-six minutes Ballymena took a much-deserved lead thanks to a goal from David McDaid that would've lit up the World Cup, let alone Warden Street. In a crowded box, McDaid brought down a ball in, spun Jonny Addis, before dancing his way past a tackle, and then wrapped it off by somehow rolling the ball round Gartside and into the net all in one movement, in a goal that had to almost be seen in person to be believed.

The Sky Blues started the second half the way they had finished the first, and despite O'Neill making a top save to paw away a Ronan Hale curling effort, Ballymena pressed on and had a second eight minutes into the half through more brilliance from McDaid. Kym Nelson cleared the ball to McDaid who was just inside the Cliftonville half, but he shrugged off Luke Turner with ease and burst down the right, before his fired ball across the face of goal was met by Kym Nelson, who had continued his run, to score on the slide and make it 2-0, as Nelson's good run of goal scoring form continued.

Four minutes later it was 3-0, as Ballymena's blitz must've left an unbeaten in eight Cliftonville shell-shocked. Nelson did wonderfully well again to beat his man and find McDaid with the outside of his boot. In the box, McDaid was at it again as he held the ball up before slotting it through the legs of Addis to find Joshua Kelly, and the skipper did the rest as he placed his finish through Gartside's legs for another outstanding goal, to cap off the classiest of performances from Kelly himself.

Following United's third, the Reds were finally able to get hold of the ball and begin to try and test Ballymena's back line, but they stumbled across a back five who were all but flawless. When a chance did come, Gormley nodded a header back across goal for Turner, who had to score from inside the six yard box, but unbelievably O'Neill was able to keep his header out with a stunning save.

A minute later there was nothing O'Neill could do as Cliftonville pulled a goal back through a cracking strike from Ronan Hale. A cross was cleared out to Hale on the edge of the box and he provided a clean side footed finish into the top corner that left O'Neill no chance.

The away side upped it after the goal, with Ballymena just pushed back a few yards and with a good bit of defending to do, and O'Neill was on hand to save well again from sub Chris Curran, but after seeing out a difficult spell, United wrapped up an emphatic win seven minutes from time.

After McCullough had sent a free kick agonisingly wide, the resulting goal kick was completely miss hit by Gartside and it was pounced on by sub Ryan Waide, who went in one on one, only to unselfishly square it for David McDaid to tap in. After scoring his 150th league goal in the first half, McDaid added number 151, as his two goals and two assists capped an all-time great Showgrounds performance.

Redman made way for Jack Henderson late on, but Ballymena had to settle for four in a remarkable performance up there with very best under David Jeffrey, with every single player adding their bit to a performance to remember.