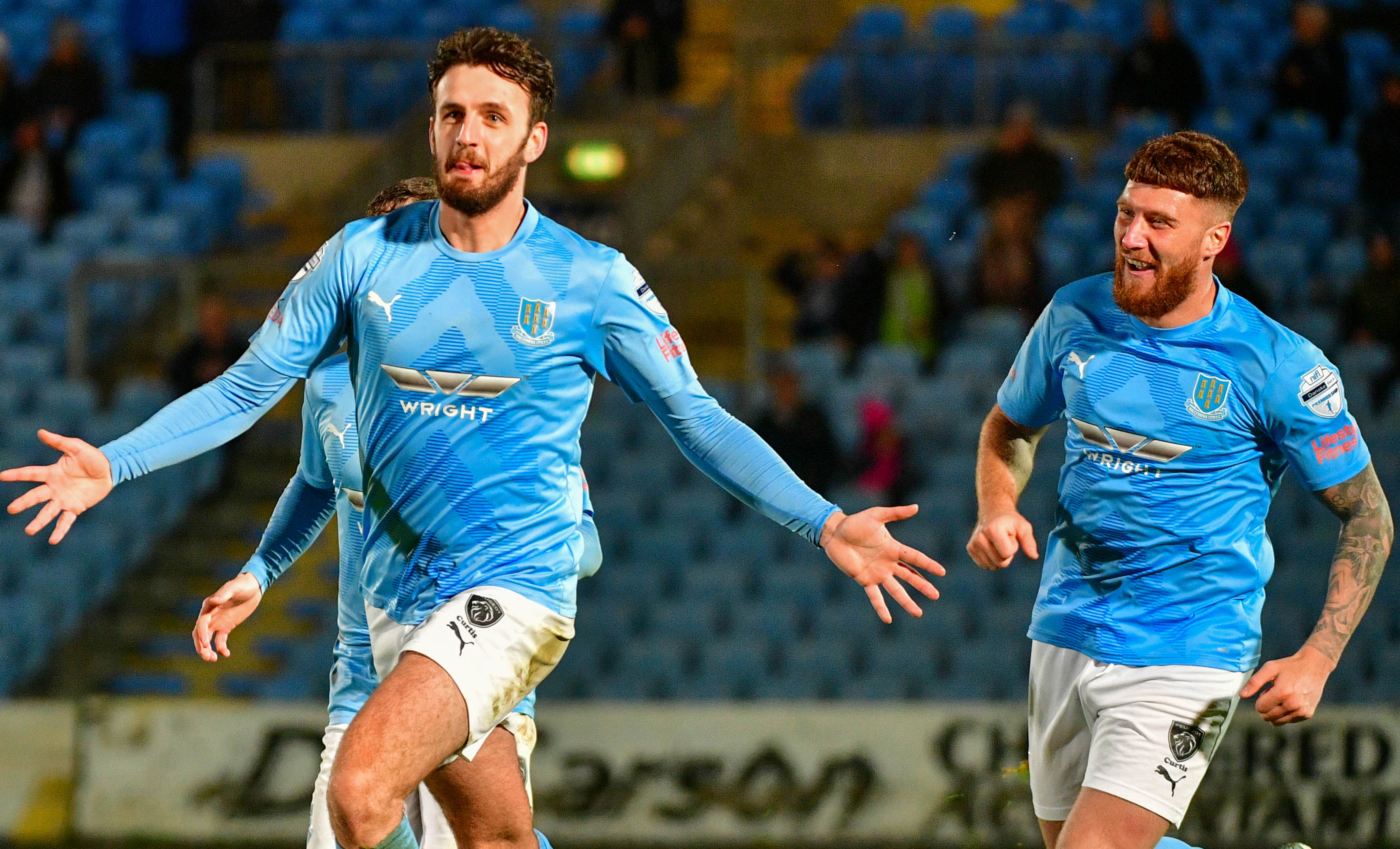 Ballymena United were rewarded for an impressive performance with a well-deserved 3-0 victory over Newry under the Showgrounds lights on Friday night.

For United's third straight Friday night game on the spin, David Jeffrey MBE made two changes to the starting XI from Lurgan last week, as Scot Whiteside and Jack Henderson came in for Ryan Waide and Joshua Kelly, whilst Paul McElroy, Douglas Wilson, Evan Tweed and Andrew McGrory all returned to the bench following injuries.

Prior to kick-off, Ballymena United held their annual Act of Remembrance, as David Jeffrey laid a wreath on the pitch prior to the playing of the Last Post and a minute's silence.

On a slick surface, Ballymena started strongly and inside two minutes Kym Nelson, back in his more usual role in midfield, charged down the left after a tidy move and his fizzed ball across goal was just about nicked off the foot of David McDaid by 'keeper Steven Maguire.

McDaid came close again when he cut inside from the left and fired just over, but on eighteen minutes Ballymena had their chance to lead when Jordan Gibson was hacked down in the box by Darren King after scrappy Newry play in their own box. Having saw their side miss their last three penalties, the home fans had some trepidation over this one, but it was Michael Place who put the horrible run of misses to bed as he sent Maguire the wrong way to nestle his spot kick in the bottom corner for 1-0.

The Sky Blues continued to control the play, however the chances dried up for the remainder of the half, and five minutes before the break the County Down side almost hit the hosts with a sucker punch leveller. A Newry corner created pin ball in the Ballymena box, before Declan Carville's strong strike rattled the underside of Sean O'Neill's crossbar, possibly with the aid of a Place deflection.

The visiting side's late warning shot in the first half gave United a reminder their deserved one goal lead was still a slender one, but those tensions were eased seven minutes into the second half when the home side went two clear thanks to a Jordan Gibson stunner. The goal scorer brought the ball forward before a one-two with Place, and after allowing the ball to roll across his body, Gibson turned and threw his hat into the ring for goal of the month at worst, as his unstoppable strike from twenty-five yards flew in off the bar in the top right corner.

Aside from striking the bar, Newry had offered very little and they were resorted to long shots as Lorcan Forde flashed a shot wide and Donal Rocks' effort from further out was well held by O'Neill.

Nelson had been typically all action in the middle, and with twenty minutes to go a crunching tackle from United's number 2 from about twenty-five yards out also incredibly flew into the Newry goal, but instead it hurtled just wide.

Despite Ballymena's dominance, with plenty of tidy play as they kept the ball on the deck for sustained periods, Newry looked to make it a nervy final ten minutes with a couple of chances. First, a long ball was latched onto by Daniel Hughes, who tried to chip O'Neill off his line, only for the 'keeper to punch the ball over the bar, before Philip Donnelly almost turned a cross home at the near post, only for an important last-ditch challenge by man of the match contender Place.

Nelson was forced off after an odd passage of play saw Nelson pull up in some discomfort whilst chasing a ball, only for him to get straight back up, but fail to continue on much longer, as he was replaced by Joshua Kelly, while Jack Henderson and Gibson also made way for Ryan Waide and Evan Tweed.
On eighty-eight minutes the Braidmen wrapped up a thoroughly deserved and needed win with a third goal. More slack Newry play allowed Kelly to win the ball back high up the pitch, and with options left and right he opted to play in David McDaid down the left and he did the rest, coolly slotting past Maguire.

In added time Ross Redman fired an effort inches over the crossbar, but it mattered not as probably Ballymena's best performance of the season saw them pick up three goals, three points and a clean sheet to put daylight between themselves and their opponents, ahead of a return clash in Newry on Tuesday night.