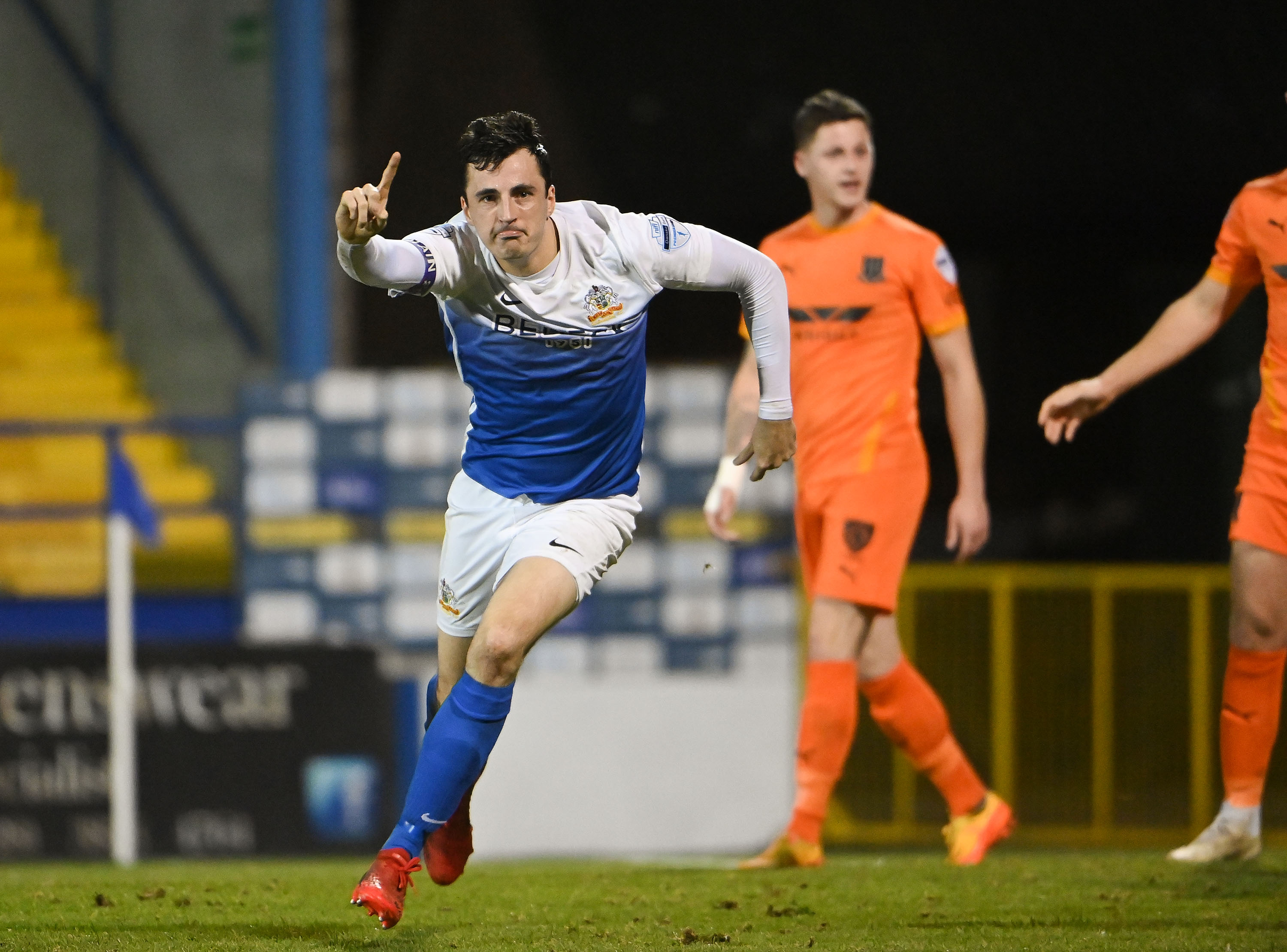 Ballymena United's poor run of league form at Mourneview Park continued after a 3-2 defeat to Glenavon in a typically crazy game between the two in a Friday night thriller in Lurgan.

After last Friday night's stalemate in Dungannon, David Jeffrey MBE made three changes for the trip to Lurgan on his 60th birthday, with two injury enforced as Sean Graham and David Parkhouse missed out, while Scot Whiteside dropped to the bench.

United have had a fairly horrible run of results in recent years at Mourneview Park, and that trend had all the signs of continuing early on with Ballymena barely able to get a touch of the ball in the opening fifteen minutes. The first of a handful of Matthew Fitzpatrick chances came on seven minutes when the forward headed just over, before two crazy games of pinball in the United box ended first with Michael Place's clearance deflecting back to Sean O'Neill, and minutes later a spate of shots ended with Conor Keeley blocking Jack Malone's stabbed shot.

With only twenty minutes gone the Braidmen looked like they'd have been happy enough to hear the half time whistle given Glenavon's unrelenting dominance, so when Jordan Gibson had a curling effort wonderfully saved by Rory Brown, if was against the run of play, as was the opener from the resulting corner. Ross Redman's delivery was put into an inviting area in the six yard box and it was met by the head of Jordan Gibson who nodded Ballymena into an unlikely lead.

Gibson's strike lifted United who quashed the hosts' dominance and began to get forward more often themselves, without really creating, but at the end of the half Glenavon were left further wondering how they were behind. First, Fitzpatrick was slid in again, only to be denied by a strong leg from O'Neill, before Conor Scannell looked certain to level when he fired past O'Neill, but Redman was on hand to somehow clear on the line, as the Sky Blues took a lead to the interval.

The first half had been eventful, but it had absolutely nothing on the second which was as crazy and value for money a half of football you could wish to see.

Just two minutes in a wonderful one-two between Peter Campbell and Fitzpatrick left the latter looking set to level, only for his close range shot to be blocked by Kym Nelson. The Lurgan Blues were adamant Nelson's block was with his arm, but further controversy followed three minutes later as the home side equalised. Ballymena were left stunned when what appeared to be an obvious goal kick was given as a corner, and from the set piece Jack Malone's cross was powered home by Matthew Fitzpatrick.

Glenavon will have felt being level was the least they deserved and after great bring out play from the back from Keeley saw him pick out David McDaid who had a tame shot saved, there was an air of inevitably that a third goal was close by.

Straight down the other end O'Neill saved well from Campbell, but it fell to Scannell who simply had to score, only for Place to produce a headed goal line clearance that defied belief.

On fifty-eight minutes the game had its third goal and it came for the hosts as another corner was turned in, this time in acrobatic fashion by captain Daniel Wallace.

There was no time to breathe though, and just three minutes later United were level, with yet another goal off a corner. This one was cleared out to Conor Keeley on the edge of the box, and his drilled shot somehow avoided everyone to sneak its way in at the right post.

After a relatively quiet five-minute spell, in terms of this encounter anyway, it was all action again as Redman produced his second goal line clearance of the night, and fourth in two games, but seconds later Glenavon had a penalty when Nelson rashly and needlessly hacked down Fitzpatrick in the box. Jack Malone stepped up, and he put Glenavon back in front as he sent O'Neill the wrong way.

For those watching in Lurgan or on the BBC stream, the drama hadn't ended there and United had the chance to level again thirteen minutes from time when Sean Ward brought McDaid down in the box. Having missed their last two penalties, United turned to Ryan Waide for this one, but the Sky Blues' worrying penalty spot hoodoo continued as Brown went the right way to deny Waide and keep his side ahead.

There was still time late on for Malone to rattle the underside of the bar and Keeley to provide United's fifth goal line clearance of the night to deny Fitzpatrick, but after a crazy ninety-five minutes in which quality went out the window to make way for enough chances and big moments to do for a season, it was the hosts who were probably good value for their win to end Ballymena's three game unbeaten run.