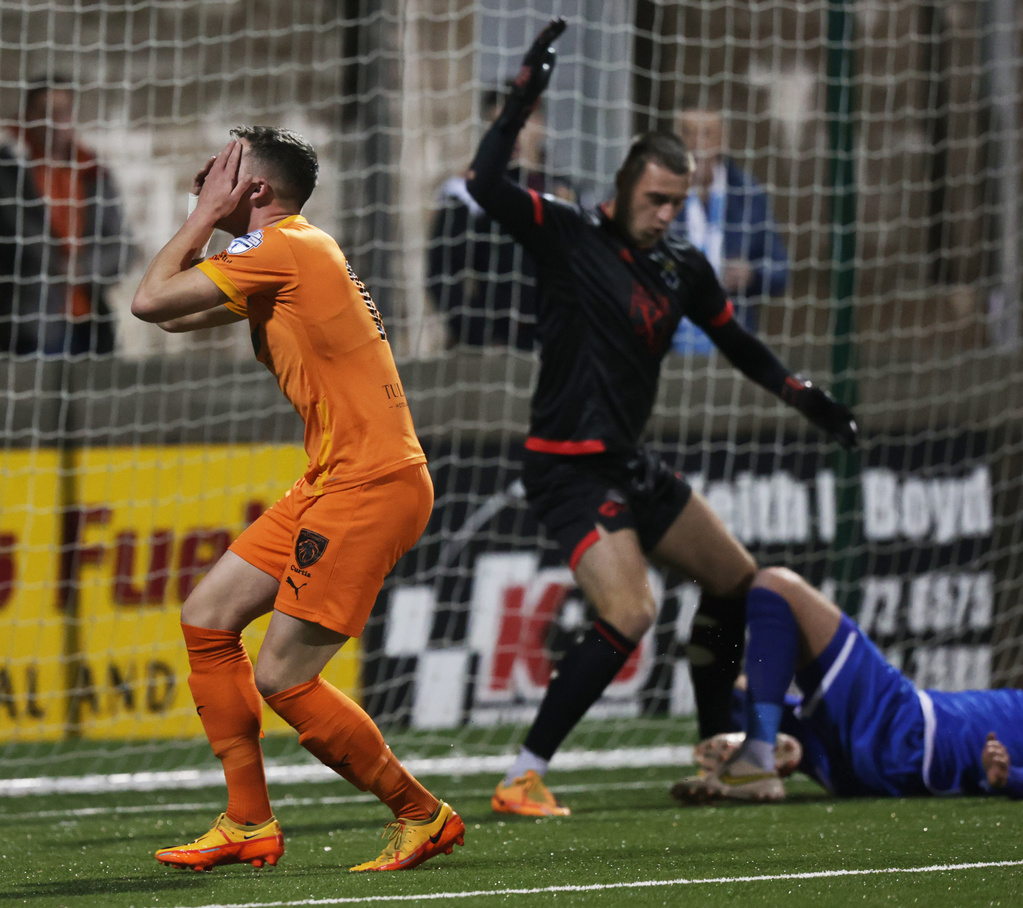 David McDaid's first half strike cancelled out a Dungannon opener as Ballymena had to settle for a point in a tightly contested 1-1 draw with the Swifts at Stangmore Park on Friday night.

The United starting XI that helped provide a memorable derby day win over Coleraine last Saturday was changed by one for this evening's trip to County Tyrone, as David Parkhouse came in for Jordan Gibson, while on the bench Kym Nelson and Steven McCullough both returned to the matchday squad.

United were on a run of eight straight wins over the Swifts, dating back almost three years, but for the majority of the first half Dungannon caused their visitors all sorts of problems. Within the opening ten minutes the hosts could easily have been two up when first Rhyss Campbell fired over after a well weighted through ball, before seconds later a mistake by Michael Place allowed Campbell in again, but Sean O'Neill saved well.

Despite being under the cosh from the whistle, Ballymena almost opened the scoring against the run of play when Ryan Waide's cross landed at the feet of Kenneth Kane, but his effort was hooked off the line by Garry Breen.

Following a decent effort from distance via Place that flew just wide, the Swifts regained control and began an all-out assault on United's goal, that finally yielded an opener after countless chances. A sharp one two set Joe McCready through on goal, only to be denied by an outstanding Scot Whiteside block, before Michael Ruddy stuck a free header wide from a corner, and Ross Redman was forced to clear off his own line after John Scott had waltzed his way into the box.

Finally, Dungannon made one of their chances count on twenty-nine minutes. Ben Cushnie's cross from the right took a slight deflection on its way into the box, and it was met by Michael O'Connor at close range who easily headed home.

With the Braidmen just not at it and extremely lucky to be only one down, the equaliser seven minutes after O'Connor's strike came as a surprise. The visitors did well to play out of a tight spot at the right corner flag, and it ended with Waide's good cross after tidy footwork being met first time by David McDaid, whose volley squeezed past Declan Dunne.

More half chances fell at the end of the half as the game became end to end, but going into the break the away side were surely more than happy to somehow get in level.

After a mostly slack first half showing, the Sky Blues came out the stronger at the beginning of the second half, as they controlled the match for the first time all evening. The half's first opening was a good one when Sean Graham's cut back found Waide, but his low effort was kept out by the outstretched leg of Dunne.

United's next couple of efforts on goal fell to the same man as good solo play rewarded Waide with a chance to shoot, but his timid attempt was easily saved. Minutes later, a delightful touch from Kane to bring the ball out of the Sky allowed him to cross for Waide again, but Cushnie was well positioned to deflect his shot wide.

With Ballymena still well on top without necessarily peppering the Swifts' goal, any momentum they had was killed by a worrying stoppage in play, when Graham appeared to strike his head on the advertising wall after a collision with Cathal McGinty, with United's number 24 eventually stretchered off.

Before what was a by and large eventless final ten, another end to end period of play presented both sides with good openings. For the hosts, a curling effort from Campbell beat O'Neill, but United again had Redman to thank as he made his second goal line clearance. At the other end, a huge chance came and went for David Jeffrey's side when Redman's free kick was poked goal wards from close range by Conor Keeley, but somehow Dunne managed to pull off a super low save.

By the time ninety minutes was approaching, neither side looked really capable of going on and finding a winner as the game rather petered out, until the very last kick of the game in the seventh minutes of added time almost yielded a home winner.

Dean Shiels' men had carried a threat on the counter and when United were dispossessed it left a three on three, but Campbell's shot was pushed wide by O'Neill, as United had to settle only for a point in a game were probably neither team deserved all three.