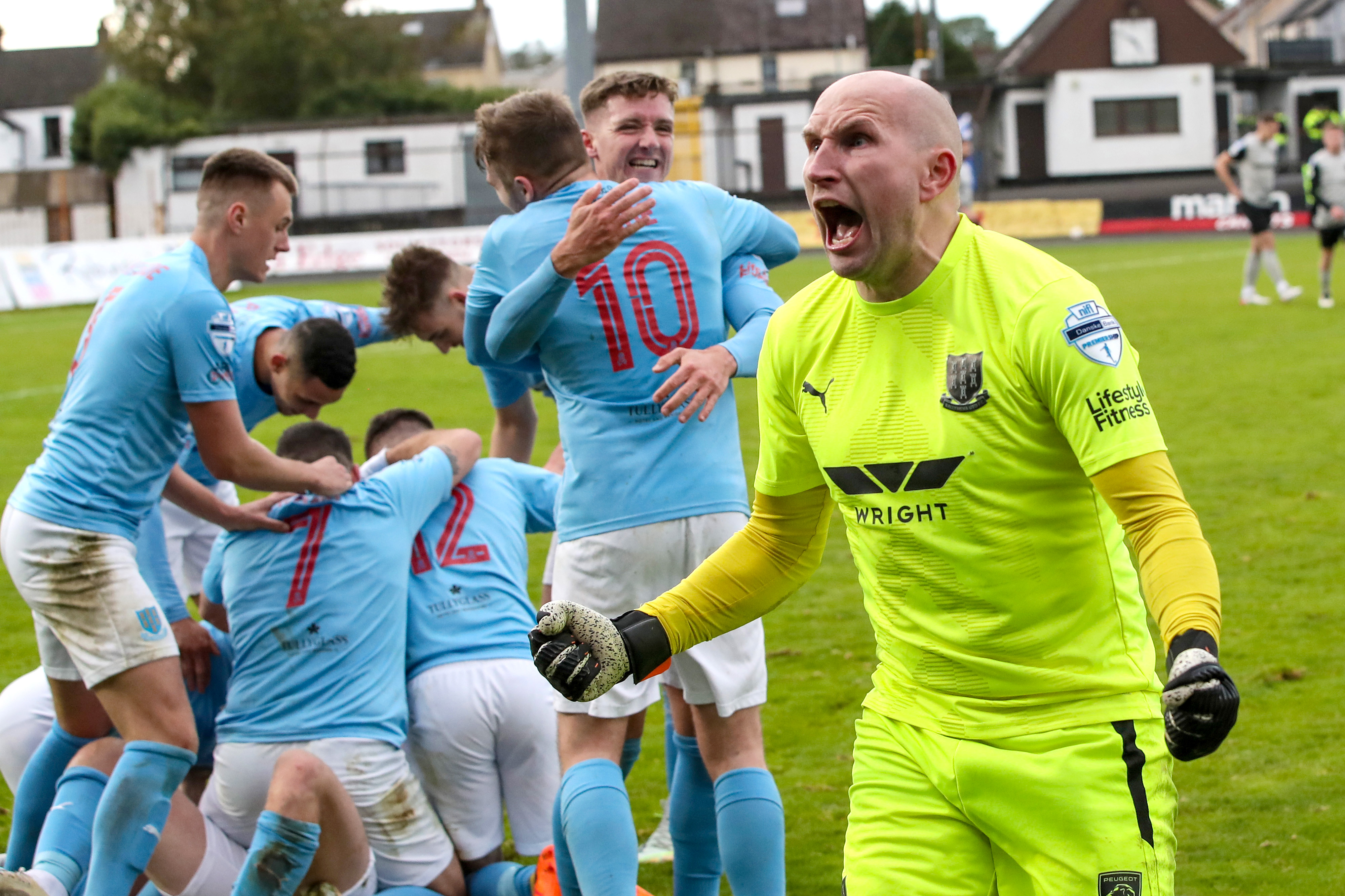 There was just the sole change to the United side that lost in the Shield to Larne during the week, as Steven McCullough missed out following the birth of his son Drew this week, and he was replaced by Michael Place.

After a much-needed victory over Portadown a week ago, United came into the first A26 league derby of the year with a bit more confidence, and after an even start, Ballymena smashed the deadlock open on fifteen minutes. Ross Redman's free kick from the middle of the Coleraine half was typically inviting, and it was met at the far post by Michael Place who poked United into an early lead.

Just three minutes later the Bannsiders thought they were level when another free kick was eventually turned home by Matthew Shevlin, but as he wheeled off in celebration, those celebrations were soon dampened when a late offside flag went up.

Following that flurry of goalmouth action, the rest of the half remained fairly quiet and extremely even, as the only real chances to the half end saw Jamie Glackin force Sean O'Neill into a good save, before David McDaid showed great strength to ride a challenge, before then firing wide.

Derby days between these two are rarely quiet, and this one was no different as a half with multiple strong challenges threatened to boil over on forty-three minutes when a couple of really poor Coleraine challenges prompted an angered United reaction, and when things had calmed down, a handful of cards were dished out between the sides.

If the first half had ended with heightened drama, the second half took more than a while to get going, but from the off it was the visitors who looked the most likely. Just before the hour mark, Lee Lynch looked like he was in for a leveller, only to be denied by a goal saving slide from Conor Keeley, but by now proceedings had turned scrappy and United were up against it, albeit defending resolutely.

The Sky Blues had struggled to keep hold of the ball in the Coleraine half, but decent link up play between Jordan Gibson, Ryan Waide and McDaid saw the latter able to get a shot away from twenty yards, but it hurtled well wide.

Another strong display from the skipper Joshua Kelly was capped by a vital block to deny Lynch on sixty-four minutes, but a minute later the away side had themselves level thanks to Shevlin. A low drive from Glackin following a throw in was met by O'Neill who got down to parry it away, but the rebound fell to Matthew Shevlin who slotted the ball under the 'keeper's legs to net against his former club.

With United still defending extremely well but struggling to see any of the ball, Jack Henderson and David Parkhouse entered the fray, but with fifteen to go Coleraine looked for all the world like going in front when Shevlin raced clear of Keeley to get in one on one, only for the league's top scorer to trip himself up on the grass and end up on the floor.

Whilst things had been feisty and entertaining for the first eighty minutes, it was ramped up in the final ten, with the first flash point seeing Coleraine reduced to ten men. Kenneth Kane burst down the left wing and with Conor McDermott struggling to catch him and already on a yellow, the full back brought Kane down and received the most obvious of second yellows.

In recent times Ballymena have struggled with a man advantage, and that trend continued to an extent as Coleraine continued to press on and force United back, but they could add no substance to their possession and as the clock hit ninety minutes a stunning run by Sean Graham was soon ended by Adam Mullan, who hacked Graham down for what was his second yellow too, as the Bannsiders were reduced to nine men.

After Mullan's slow departure and a Coleraine sub, it was Ross Redman over the free kick from around twenty-five yards out, and the veteran defender sent the Showgrounds into delirium as he curled an unstoppable free kick past Martin Gallagher, prompting celebrations that haven't felt for a while in the home end.

The drama was far from finished there though as Coleraine still found time to give United fans an almighty scare or two. A Conor McKendry free kick missed everyone in the box and forced O'Neill into a fine stop, but from the resulting corner O'Neill produced a save any goalkeeper in the world would be proud of. The corner dropped out to Lyndon Kane whose shot through a sea of bodies was unbelievably saved by O'Neill, who someone beyond belief got a hand onto it when the ball was seemingly past him to tip over.

United saw out one final corner to record a huge win to make it back-to-back league victories, in a proper derby that had absolutely everything, but most importantly three points staying on Warden Street.