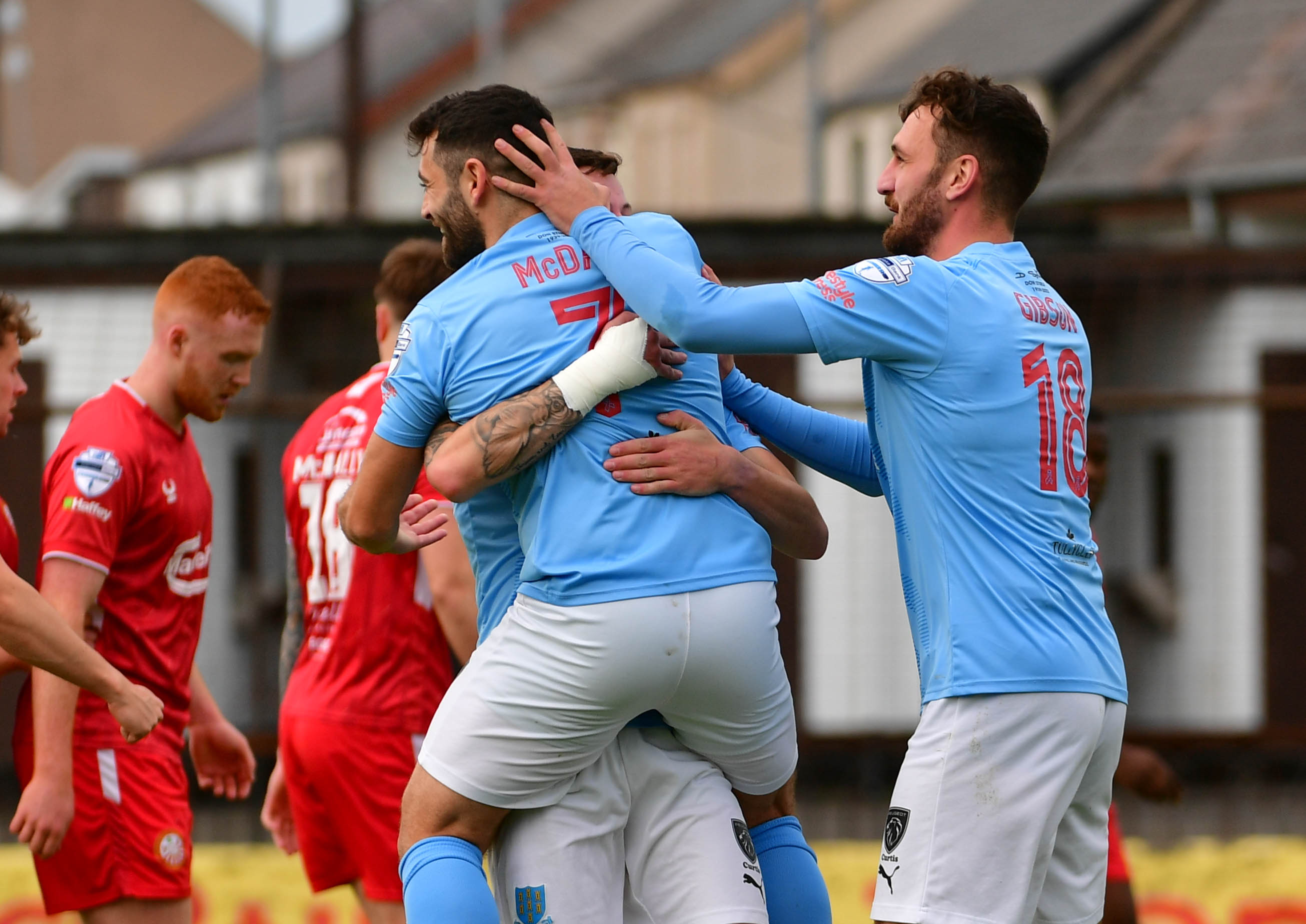 A David McDaid double gave Ballymena United their first win in six league games with a much needed 2-0 victory over Portadown on Saturday afternoon at the Showgrounds.

There were three changes for United from the team that exited the BetMcLean League Cup during the week at the hands of Coleraine, as Scot Whiteside, Sean Graham and Ryan Waide came in, whilst on the bench there were returns from injury for Evan Tweed, Kym Nelson and most notably Douglas Wilson.

With only three points separating Ballymena in 10th and Portadown at the bottom of the table, both sides would've eyed up today as a key game, and Ballymena drew an important first blood when they opened the scoring on eight minutes with their first goal in six games against Premiership opposition. A deep free kick from Ross Redman looked to be heading into the hands of goalkeeper Jethren Barr, but he couldn't get to the ball before Conor Keeley, and after the ball dropped David McDaid was on hand to easily convert his first league goal in Sky Blue.

The Braidmen continued their good start following the goal, as McDaid dragged an effort wide after good play from Jordan Gibson and Kenneth Kane did really well to keep a cross alive, before seeing his stabbed shot goalwards well saved by Barr.

Portadown have been struggling for goals themselves this season and they offered very little throughout the first half, with Lee Upton's diving header that flew well wide really all they had until the end of the half.

Whilst Ballymena were in control, they weren't exactly seiging the Ports goal, but after Waide half volleyed well wide, a nice pass from Steven McCullough set Kane off and running, and he cut inside before seeing his curling low effort kept out well by Barr.

Towards the end of the half Mark Russell called Sean O'Neill into action for the first time with a shot off a free kick routine, but it was an easy save as United, who weren't vintage but were certainly improved, took a deserved lead into the interval.

United failed to get going early on in the second half, and it allowed the visitor's the chance to finally get themselves into the game in some capacity. After a cross found Joshua Archer totally unmarked in the box, his weak header was easy work for O'Neill, but five minutes later the same man danced his way through United bodies and into the box, only to see his deflected effort well saved by O'Neill at his near post.

With half an hour left some worry may have started to set in in the home end given the slender advantage and recent results, but the Sky Blues started to pick it up again and as Gibson became more involved, he teed up McDaid who fired over, before his quick throw in allowed Kane to cross for Waide, who should've done better as he volleyed wide at the back post.

After Upton had almost chested the ball into his own net with an attempted clearance that luckily for the Ports defender landed on the roof of his own net, Kym Nelson replaced the skipper Joshua Kelly, who had put in a solid shift in United's midfield, with ten to go, and four minutes later Ballymena and McDaid had a second.

A poor goal kick from Barr landed straight at the feet of Kane in the centre circle, and he delivered a stellar first touch before lifting the ball over the top for David McDaid, who showed his class as he held off Jonah Mitchell, before flicking the ball past Barr.

The Ports had barely threatened all day but to their credit gave it a go in the final five minutes, and in amongst a few half chances O'Neill pulled off a stunning save to tip a Stephen Teggart free kick onto the post.

2-0 is how it finished as United picked up a vital three points, with a clean sheet to boot, to hopefully provide everyone with a much needed lift ahead of two derbies in the Shield and League in the coming week, against Larne and Coleraine respectively.