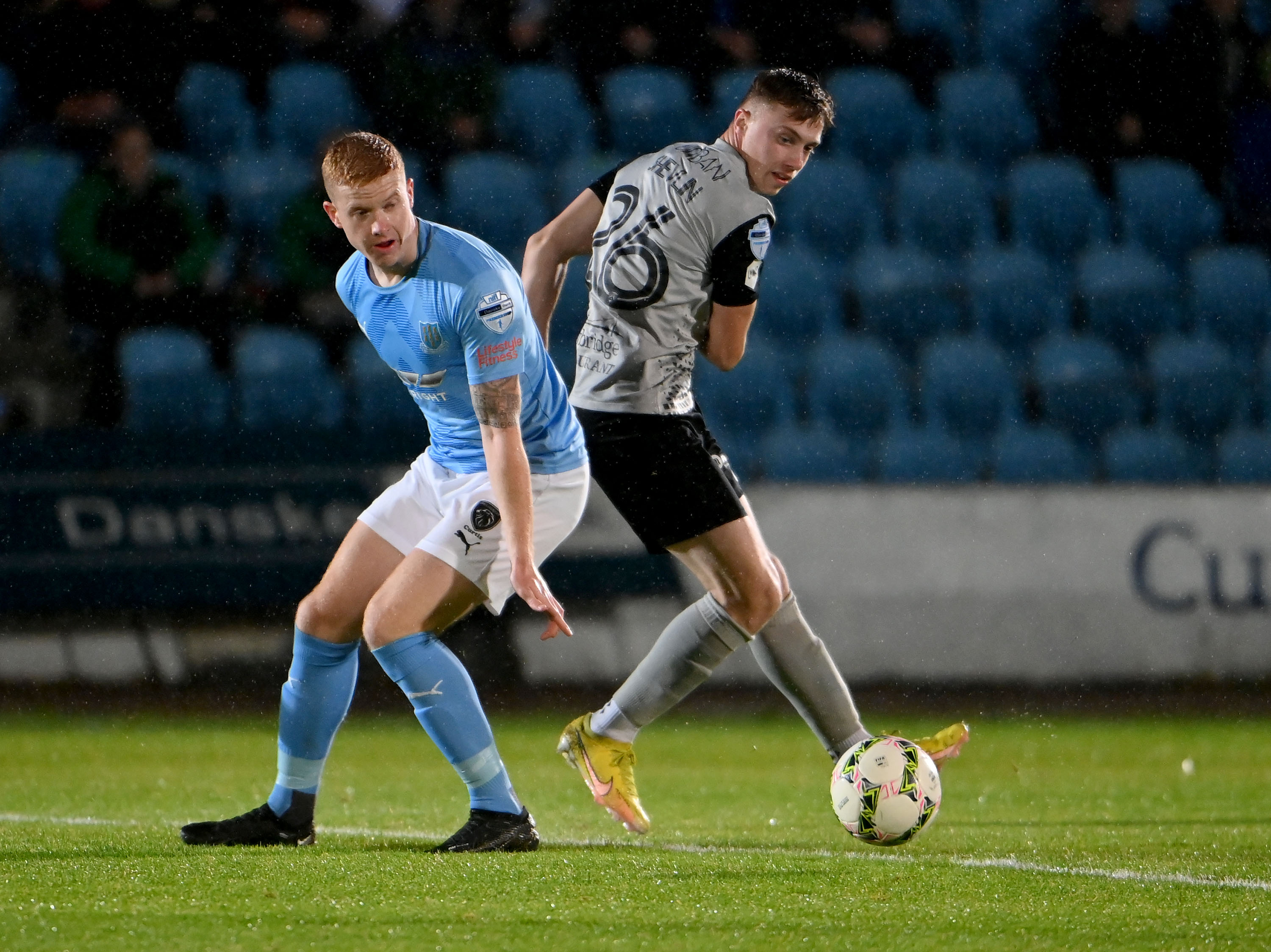 10-man Ballymena United bowed out of the BetMcLean League Cup at the hands of derby rivals Coleraine following a 1-0 defeat at a rain-soaked Showgrounds on Tuesday evening.

There was one change to the United side that started in the sixteen minutes played at The Oval on Friday night before heavy rain brought an early end to proceedings, as captain Joshua Kelly came back in for Jack Henderson.

It was another wet night for this one, not quite at the levels saw in East Belfast, but persistent rain none the less, and in a damp first half it was a well contested and even forty-five minutes with very little chances.

United started fairly well and on eleven minutes a chance very nearly fell the way of the hosts best player in the first half, David McDaid. An attempted shot from Jordan Gibson was well wide of the target but looked set to fall to McDaid for a tap in, but in the nick of time a Coleraine boot took the ball away from McDaid.

Ten minutes later Coleraine had their first real clear chance via Lyndon Kane. Referee Tim Marshall had got plenty of use out of his whistle early on, but with two players down he allowed play to continue and it eventually fell to Kane, but the full back's long-range effort flew just over Sean O'Neill's crossbar. Bar those two half openings neither goalkeeper had anything to do, but it was a hotly contested derby in the middle, but as the tackles flew in neither side could gain an upper hand.

A well worked Sky Blue move almost yielded the games opener ten minutes before the break. A few neat passes ended with an extremely dangerous Kenneth Kane cross just missing Steven McCullough who had continued on into the box, with the ball then hitting David Parkhouse and falling just wide of the post.

Conor McKendry had been a first half substitute for Coleraine after an injury to Joshua Carson, and just before the break he fired a well struck free kick inches over the crossbar, as an evenly contested, but rare in chances and quality, half ended scoreless.

Almost as close as Ballymena came to a goal came just three minutes into the second half. McCullough's floated free kick was nodded down by Conor Keeley into the path of Kane, but his poorly hit shot in a crowded box dribbled agonisingly wide of the post.

After that chance the remaining forty minutes were mostly all the visitor's as Ballymena were forced into a defensive shift. Following a Stephen O'Donnell header that flew miles over, Coleraine looked for all the world to go ahead when Keeley misjudged the flight of the ball to allow Shevlin in at close range, but the defender covered himself magnificently well with a goal saving tackle as Shevlin went to pull the trigger.

Coleraine were now dominating but hadn't been firing on all cylinders all game, yet were only denied on sixty-six minutes thanks to a sensational O'Neill double save. McKendry was slid in down the left hand side of the box but his powerful deflected shot was wonderfully saved by O'Neill, but he made an even better one handed reaction save to somehow deny Jamie Glackin on the follow up.

In amongst the fairly one way traffic, Keeley almost headed Ballymena into the lead seconds after O'Neill's heroics. Another inviting free kick from McCullough was met by Keeley who got up highest, and his header was well saved by Martin Gallagher who got down to keep it out, in what was his only of the night.

Heading into the final twenty minutes the rain was now hammering down on Warden Street and United had more problems to contend with after conceding a penalty and being reduced to ten men. A ball into the box across goal saw Shevlin get on the wrong side of Place who bundled him over, with the referee pointing to the spot and showing Place his second yellow. The Braidmen received a reprieve however as former forward Shevlin tried to pick out the bottom corner, but O'Neill guessed the right way and pulled off a top stop to keep it level.

Just seven minutes after Shevlin' penalty miss, United's resistance was finally broken as McKendry broke the deadlock with ten to go. A ball from the right, similar to that for the penalty incident, found its way to the back post where Conor McKendry was free and waiting, and he managed to just squeeze his effort in between O'Neill and the post to put Coleraine ahead.

The hosts tried to find a leveller late on, but just couldn't create anything to concern the Bannsiders, whilst at the other end subs Evan and James McLaughlin both missed good openings to wrap up the tie. In the end United could find no leveller, as they exited the League Cup with a performance in which they battled well, but yet again creating chances and goals seems a huge task at the minute.