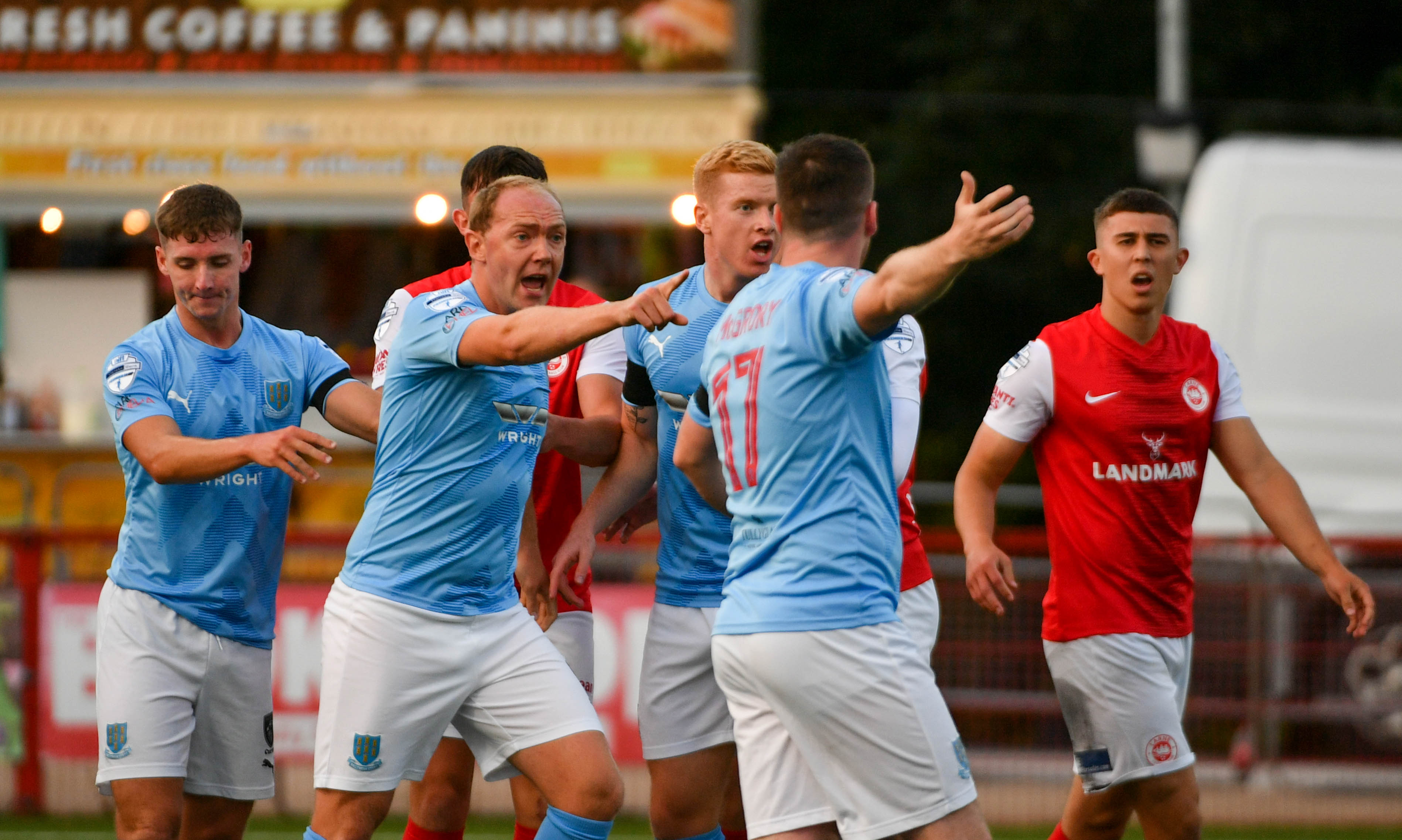 TEN-MAN Ballymena United were comfortably beaten in the first Shanes Hill derby of the season after a 3-0 defeat by Larne at Inver Park on Friday evening.

Before kick-off, Inver Park came together to pay tribute with a minute silence to Ballymena United Vice-Chairman and a stalwart of football in Northern Ireland, Don Stirling, after the sad news this morning of the passing of a man who has been remembered as Mr. Ballymena United.

There were three changes to United's starting line-up in what was a third game in six days, as Conor Keeley, Paul McElroy and Michael Place made way for Ross Redman, Sean Graham and Andrew McGrory.

The opening minutes of this one saw a cagey start from both teams, but when the chances started to filter through, they were coming the way of the hosts. After Paul O'Neill had saw a goal-bound shot blocked by Redman, Fuad Sule had an effort well saved by Sean O'Neill, before he was worked again to deny his namesake Paul.

On sixteen minutes a huge call that would go on to shape the game was made by referee Raymond Crangle. Sean O'Neill went to ground to gather a loose ball in the box, but was struck in the head by the boot of Paul O'Neill who arrived needlessly late on the slide, but much to the surprise of those in Sky Blue, the card colour was only yellow.

After soaking up a bit of pressure, Ballymena had their first effort on goal on twenty-seven minutes when David McDaid had a long-range shot easily saved, but just a minute later the ex-Larne man probably should've had the Sky Blues ahead. Just beforehand, Rohan Ferguson was off his line quick to bat down an attempted lob by Joshua Kelly, but when the ball came back into the box it fell to McDaid, but somehow from point blank range Ferguson was able to get a hand to it in a huge opening.

After a few shots from distance had come and gone for Larne, the Invermen took the lead three minutes from the interval. Leroy Millar made his way down the left and his low ball across the box was flicked on by Lee Bonis into the path of Paul O'Neill, and the man who many would dispute was lucky to be on the pitch had the simple task of tapping home from close range.

Despite O'Neill not being overly tested in the first half, Larne's strike before the break had been coming and United's job got even harder just three minutes into the second half as Steven McCullough saw red. A high challenge from McCullough on Mark Randall resulted in a straight red card from referee Raymond Crangle.

With the Braidmen already somewhat chasing shadows Larne turned the screw with the man advantage as O'Neill struck wide on the turn, before he fired into the side netting minutes later.

Some wide of the mark shooting from a Larne side now in full control despite not being quite at their best meant United were still only the single goal behind entering the final fifteen minutes, but not long after substitute David Parkhouse saw a first effort of the half for Ballymena fly well over, Larne wrapped up the points with a second. A minute before the goal, Millar somehow failed to find the net against his former club, when free as a bird at the back post he shot wide, but it mattered not when in the next attack Ben Doherty's cross from the left found Paul O'Neill in acres of space in the box, and he added salt to the wounds with his second goal.

Against tired legs, Larne sub Matty Lusty was causing all sorts of problems and after he was denied by O'Neill following a solo run, Millar tapped home the rebound, only to be flagged for offside.

Lusty was denied again by O'Neill after another run when he was again uncontested by those in Sky Blue, but in added time United's misery was compounded with a third goal. A corner caused pinball in the box that seemed to go on forever, but it was ended by Albert Watson who slammed the ball home, to cap a bad night for Ballymena who were well beaten in every aspect of the game.