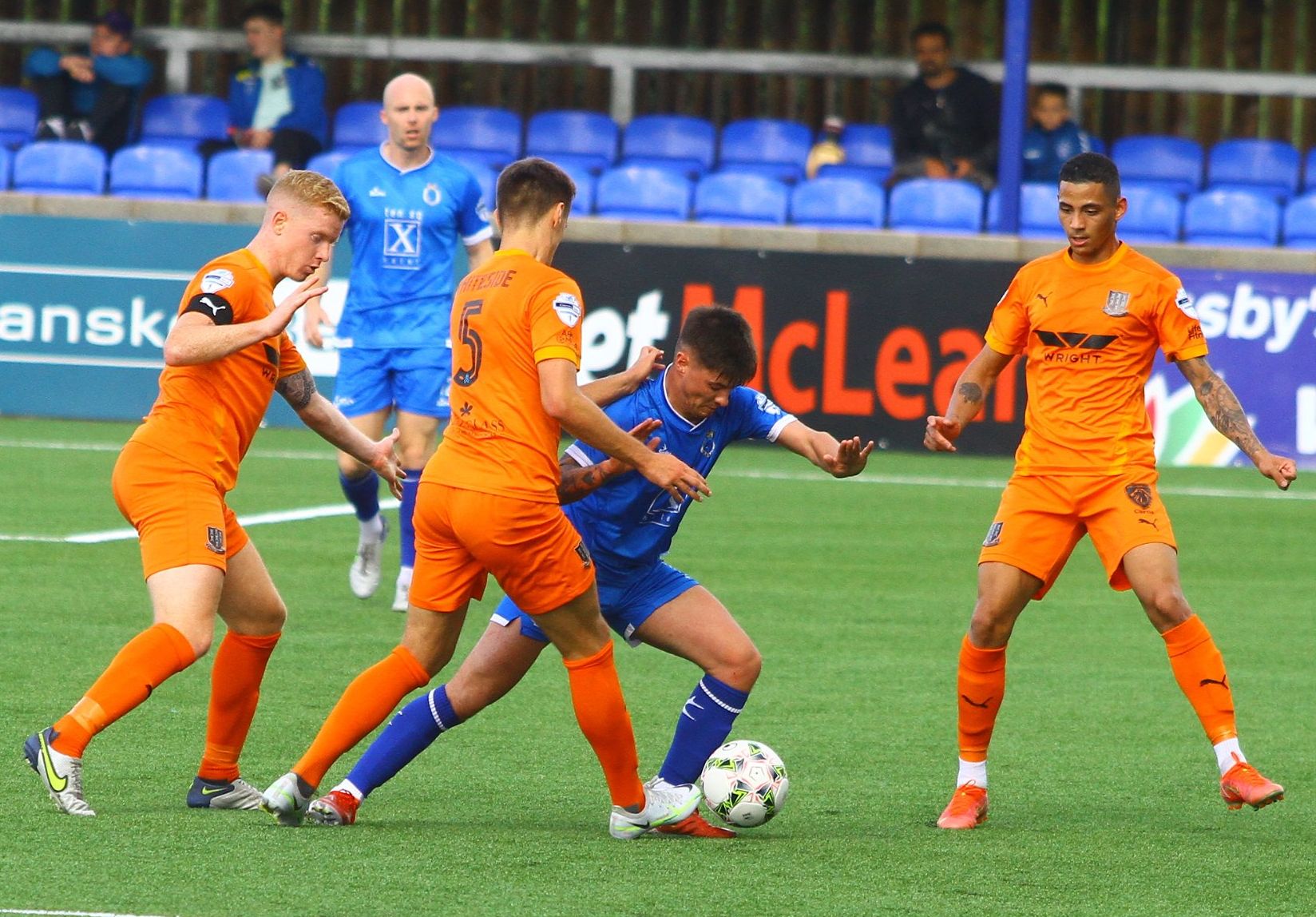 Ballymena United notched up their first league win of the season as second half goals from Joshua Kelly and Conor Keeley helped them to a 2-0 win over Dungannon at Stangmore Park on Saturday afternoon.

David Jeffrey MBE made two changes to the side that picked up what was a disappointing point in the league opener last week against nine men Glenavon, as Kym Nelson returned from suspension to replace Ross Redman, while David McDaid came in for the injured Ryan Waide.

The game marked the opening of Dungannon's new artificial surface at Stangmore Park, but the first half of action on the new pitch saw little by way of chances. The hosts started the brighter of the two, but an early shot from Rhyss Campbell that flew well over was their only real chance.

United weren't doing much in the early stages, but what they did do wasn't bad to watch and a nicely worked move ended in Michael Place crossing for Jordan Gibson, but his header was kept out by Declan Dunne. On twenty-six minutes a game that continued to be bereft of chances had a huge one when slightly against the run of play a long ball over the top from Place found McDaid. The new man, making his first competitive start, brought the ball down delightfully, but as he honed in on goal, Darren Cole put enough pressure on him to see a big chance wasted as his poor effort was easily saved.

As the half limped towards half time, possibly an even big chance than McDaid's came and went again for the Braidmen. Another extremely tidy team move ended with McDaid doing wonderfully well before he slid Gibson in with a perfectly weighted pass, but Gibson slotted his effort wide of the far post as the half ended scoreless.

Evan Tweed had a tidy first half, but was also on a booking from early on in the game, and at half time he made way for Jack Henderson in a change to United's midfield. One of those midfielders alongside Henderson was Kelly, and just six minutes into the second half the skipper put his side in front. The Swifts had moved the ball about well, but their playing out from the back went wrong as a misplaced pass fell to McDaid, and he produced an instinctive and delightful backheeled pass to set Joshua Kelly clear in the box, and he did the rest as he coolly slotted past Dunne.

Just two minutes later it could easily have been two when the provider McDaid had another big chance. Strike partner Paul McElroy set McDaid racing clear on goal from not far inside the Swifts' half, but McDaid didn't really seem to ever have the ball where he wanted it at his feet, and under pressure again the chance went. After a strong opening twenty minutes to the half from Ballymena, their opponents began to grow into the half, though without overly troubling Sean O'Neill.

Arguably their best chance came when play continued with Scot Whiteside down hurt in the box, and after referee Shane Andrews had waved away claims for a penalty, Michael Ruddy saw a tame header easily kept out. As the game approached the final ten minutes a James Knowles free kick that caused O'Neill little issues was still as close as Dungannon had come despite a bit of pressure, with Keeley and Nelson in particular almost faultless at the back.

Amid those final twenty minutes David Parkhouse, Andrew McGrory and Kenneth Kane had all been introduced and with one-minute left of the ninety, United made sure of all three points with a second goal.

A foul on Place won the Sky Blues a free kick near the touchline, and just like a week ago Steven McCullough added another assist as his dangerous delivery was stabbed home from close range by Conor Keeley who added a goal to his clean sheet.

An assured display from United in mid Ulster as two goals, three points and a clean sheet takes them to four points from six to start the season.