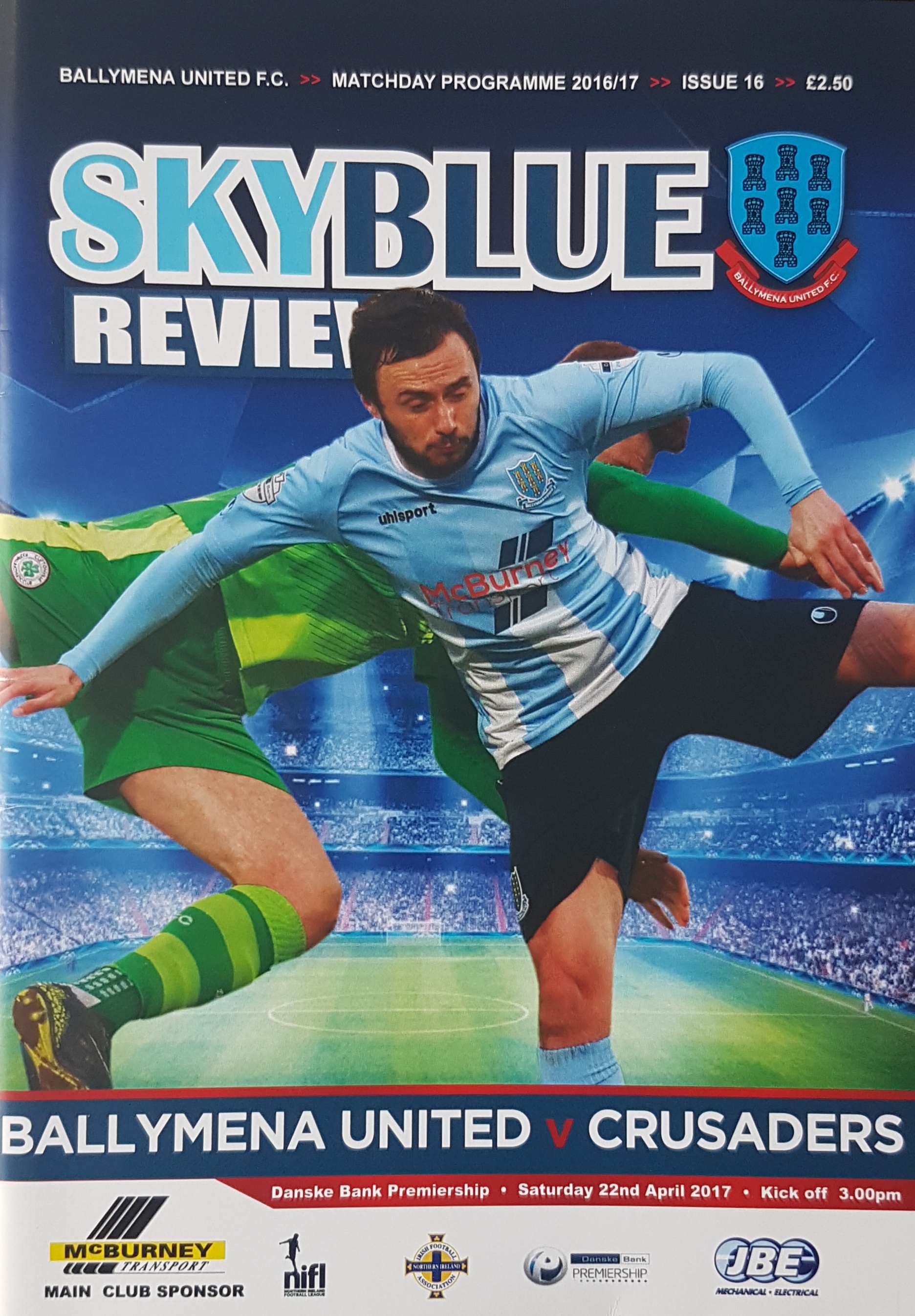 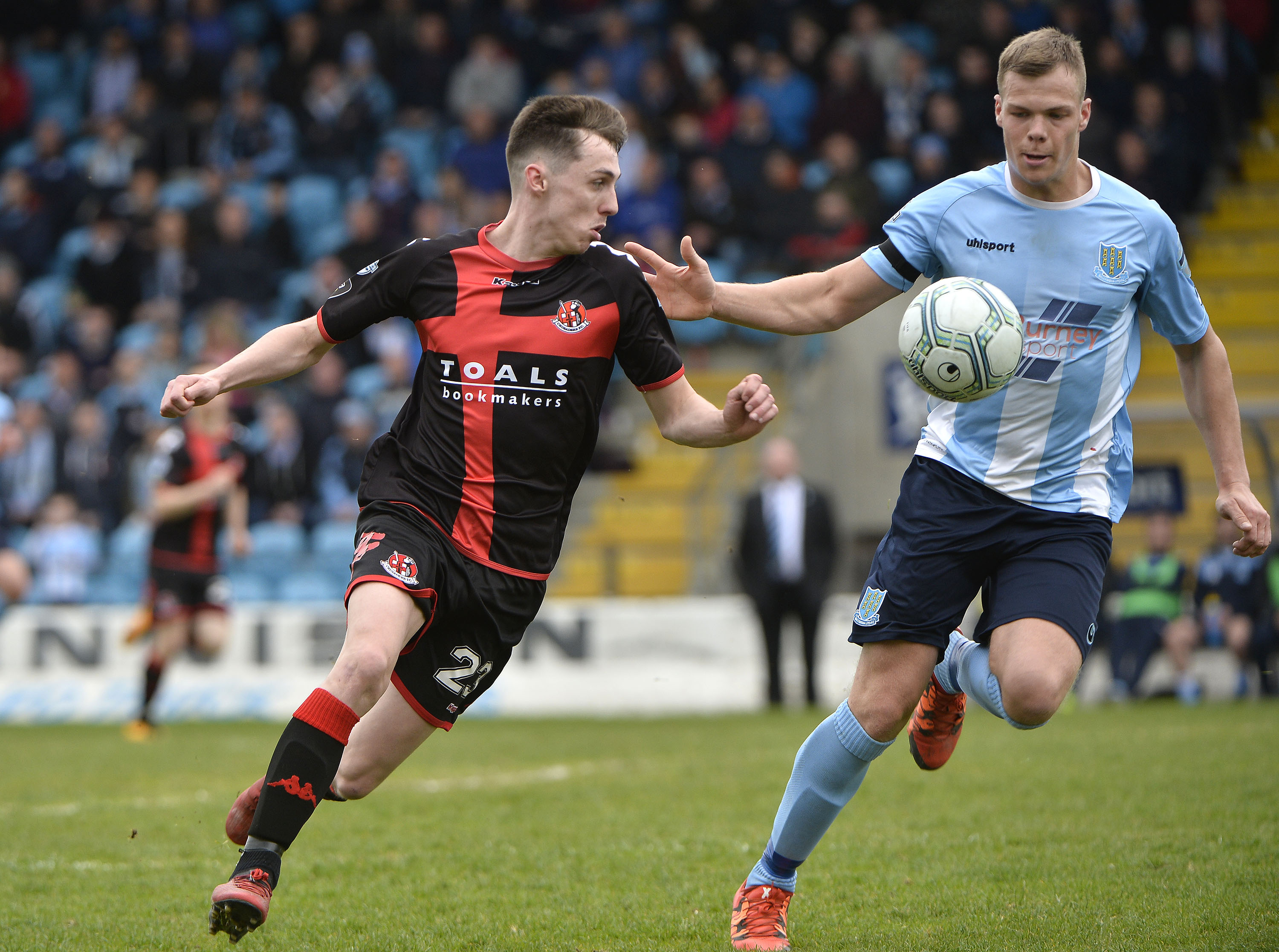 Ballymena United grabbed a fantastic 3-0 win over Crusaders at the Showgrounds today.

The first half took time to get going as both sides looked edgy with the importance of the game. The first chance of notes arrived for the visitors after 13 minutes. A free kick from Craig McLean was met by the head of an oncoming Jordan Owens, but Ross Glendinning saved well. Ballymena's first real opening didn't come until the 20th minute. A corner from Conor McCloskey was fired into the box with pace but Johnny McMurray was only able to head over. With still little to split the sides, Billy Joe Burns tried his luck from distance but was never troubling Glendinning.

In the final 10 minutes came two fantastic chances for Cathair Friel, neither of which he could quite put away. First, the Crues' Paul Heatley went down rather theatrically and after play was waved on, United counter attacked. McMurray's ball went passed Sean O'Neill and found Friel, who took a heavy touch to the byline, and with just a defender to beat, Friel stuck the post. Then, a minute before the break, Friel went close again.

McMurray had a go from distance which was spilled by ex United man O'Neill straight to Friel. With the goal at his mercy, Friel's shot somehow took a deflection and went wide, with most of the home end thinking he had scored.

At half time David Jeffrey made a change, with Caolan Loughran being replaced by Tony Kane, returning from his suspension. Having finished the first half on the back foot, Crusaders came out strong for the start of the second period. Just 2 minutes in Gavin Whyte burst through on goal, but was stopped by the legs of Glendinning. Straight after, the United defence was again breached, this time Heatley passing four players, but again Glendinning was on hand to shut out the danger. On the hour mark Heatley had yet another chance to break the deadlock. This time he was set up by Owens, but Glendinning stood strong to again deny. Ballymena's second sub saw Joe McKinney replace Fra McCaffrey and seconds before the change United had strong penalty appeals turned down when Leroy Millar's cross looked to have struck a Crusaders arm.

On 71 minutes the game finally saw a goal as the Sky Blues took an important lead. Millar and Friel combined on the wing before Friel did well to pass two Crues players. His ball into the box was met by Conor McCloskey who guided it nicely past O'Neill.

Now behind in the match, and the title race as Linfield led at Coleraine, Crusaders stepped up their attacking play. Jordan Owens found himself unmarked at the back post, but his header goalwards was tipped over by Glendinning. Former Ballymena star David Cushley came off the bench and looked set to equalise from 10 yards out, but Kyle Owens arrived to make an incredible goal saving tackle. The final five minutes brought a frantic end to the game. Cushley again had a go with a volley, but it went well wide. At the other end, McMurray picked the ball up and had Friel in front of him in acres of space, but McMurray opted to go it alone and couldn't beat O'Neill, who easily saved.

On 86 minutes Ballymena took a huge step to securing all 3 points when they scored their second. With Crusaders playing a very attacking, high line, 'keeper O'Neill found himself well outside his box where he tried, but failed to take on McMurray. After dispossessing O'Neill, this time McMurray did find Cathair Friel, who easily finished into the empty goal from outside the box.

Craig Forsythe almost set up a nervy finish when he found himself with a free header from a corner, but he sent the ball agonisingly wide of the post. Two minutes into added time, with Crusaders lumping everyone forward, Ballymena broke away to find a third. McMurray got the better of his man and again supplied his strike partner Cathair Friel, who had all the time in the world, before coolly slotting the ball under O'Neill for 3-0, and Friel's 22nd of the season.

The result now sees things out of Crusaders' hands in terms of the title going into the final day of the season, but for the Sky Blues, a terrific win in the last home game of the normal season keeps Ballymena competitive for 4th place over Cliftonville.