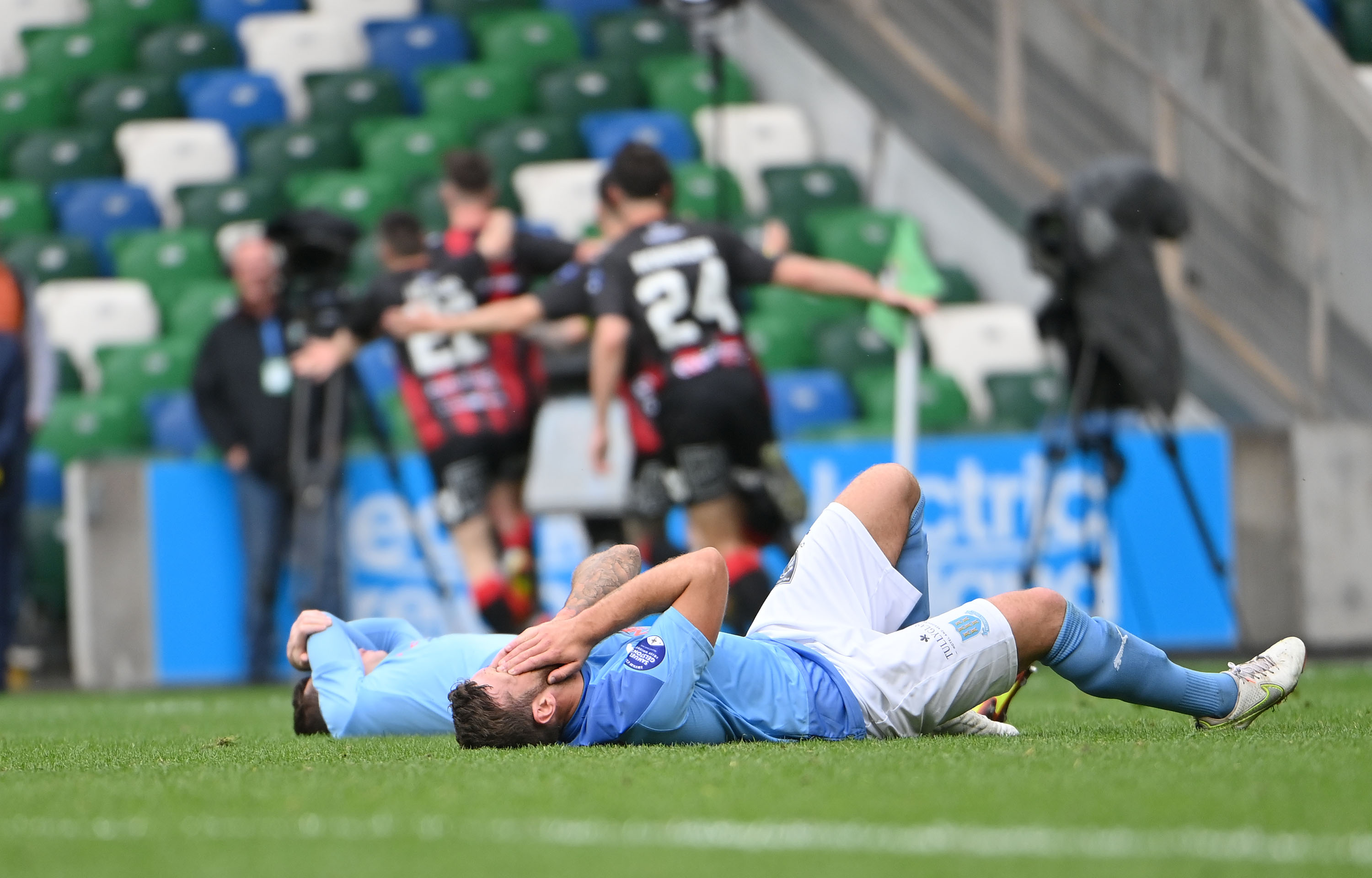 Ballymena United conceded in injury time in both normal and extra time to suffer a heartbreaking 2-1 defeat to Crusaders in the final of the Samuel Gelston's Whiskey Irish Cup at The National Stadium on Saturday afternoon.

After changes aplenty last weekend in Dungannon, it was a more familiar looking United XI for the showpiece final, with nine changes made as Ballymena chased a first Irish Cup in thirty-three years.

In front of a large sea of Sky Blue in fine voice in the South Stand and The Kop, the Braidmen started well in the showpiece event of the season. On two occasions early on Andrew McGrory and Leroy Millar linked up well down the right, with David Parkhouse eventually heading over first time, while second time round Millar was in, only for Johnny Tuffey to make a good save.
However, from the resulting corner, Ballymena drew first blood in the final on nine minutes. McGrory would probably admit it wasn't his finest set piece as his low corner went to the near post, but it mattered not as Robbie Weir was the unfortunate one to turn the ball into his own net and send the far end of the ground into a frenzy.

After the early goal things settled down and although Crusaders' began to create chances, with Paul Heatley volleying over their first, United were playing some good stuff and never looked under any real pressure. They were almost in for a second when another good move ended with Millar putting Steven McCullough in, but after he'd dragged his shot agonisingly wide, the flag went up for offside. Jordan Williamson was called into action for the first time twenty-seven minutes in when Ben Kennedy took a pop at goal from a tight angled free kick, but Williamson was alert to bat it behind. Five minutes later the Crues looked like they would be in to level when Adam Lecky's flick on put Heatley through, but he was denied by a stunning Ross Redman block on the slide, with McGrory pulling out another huge block from the corner.

Just as the North Belfast side were starting to turn the screw a defensive mix up provided United with a glorious chance to make it 2-0. Under no pressure Billy Joe Burns and Daniel Larmour got themselves in all sorts of bother to allow Parkhouse to spring clear from nowhere, but he opted to round Tuffey instead of shooting and it allowed Burns time to get back and make the tackle.

Late on Heatley was again denied, this time by an interception from Conor Keeley, but United would've been more than content at the break with a deserved lead.

Much like the first, United were out of the blocks quite in the second half, now playing in front of the support that was sensational all game. McGrory went close to a second when his free kick from twenty-five yards drifted inches wide, before McCullough did exceptionally well to win the ball back and break, before a ball in from the left found Ryan Waide, but his first time shot flew over.

With an hour gone it was still so far so good for United, but Crusaders couldn't have come closer to levelling when McGrory was caught out to allow Heatley a shot, but his near post attempt was well saved by Williamson. Going into the final twenty minutes Crusaders were starting to put Ballymena under a fair amount of pressure, but they stood strong. Heatley picked out Declan Caddell at the back post, but he turned it into the side netting.

United's first sub saw Paul McElroy replace Brendan Barr, and within a minute of coming on McElroy had strong penalty appeals turned down when he was on the end of a last ditch Josh Robinson tackle in the box.

Three more subs followed, including Caolan Loughran for the injured Keeley, who was a rock at the back, but straight off the back of that sub, Stephen Baxter turned to Jordan Owens as Crusaders lay seige to United's box with long balls. From the tightest of angles Heatley somehow hit the crossbar, before chances came and went for Robinson and Johnny McMurray, but in the final minute of four added on, as United were seconds away from a historic win, Crusaders levelled. The final play saw a corner flicked on to the far post, and there Robinson was able to bundle the ball home to break hearts and serve up extra time.

Gutted from conceding so late on, Ballymena had to pick themselves up for the next thirty minutes, and they proved scrappy at times. Michael Place replaced Waide who had ran himself into the ground, but in the first half the sides really only traded a chance each. First, McMurray raced down the right flank before he tried to seek out Heatley with a ball across goal, but McGrory was the saviour once more with a vital nick on the ball to take it away from Heatley. At the other end, a great piece of solo work from McElroy gave him space for a shot, but he dragged it wide from distance as the first fifteen minutes passed scoreless.

The second half of extra time was mostly Crusaders as they once again took the aerial route, but in the first minute it was the Braidmen who spurned a massive chance. The chance of a break was on at times and when Sean Graham broke down the left it was four on three, but after he picked out Kenneth Kane in the box, his control was poor before having a shot blocked.
In the final five minutes Aidan Wilson struck the top of the bar from a corner, before Ben Kennedy was afforded far too much time to get a shot away, but Williamson saved.

More than a few eyebrows were raised when two minutes of additional time found, and in the second of those two minutes, with United's players having left absolutely everything out on the field, their hearts were broken for a second time as Crusaders won it. Ballymena were able to clear a cross once, but when the ball was recycled back in, it dropped to McMurray who from just inside the box fired a first time volley past Williamson into the bottom corner to leave stunned silence in the United end.

Congratulations must go to Crusaders on their success, but for Ballymena, a story you couldn't script left everyone of Sky Blue persuasion immensely proud, but ultimately beyond gutted with the most cruel of outcomes in Belfast, that will take a while to get over.


Notice: Trying to access array offset on value of type null in /home/customer/www/bufchistory.com/public_html/matchdetails.php on line 3255