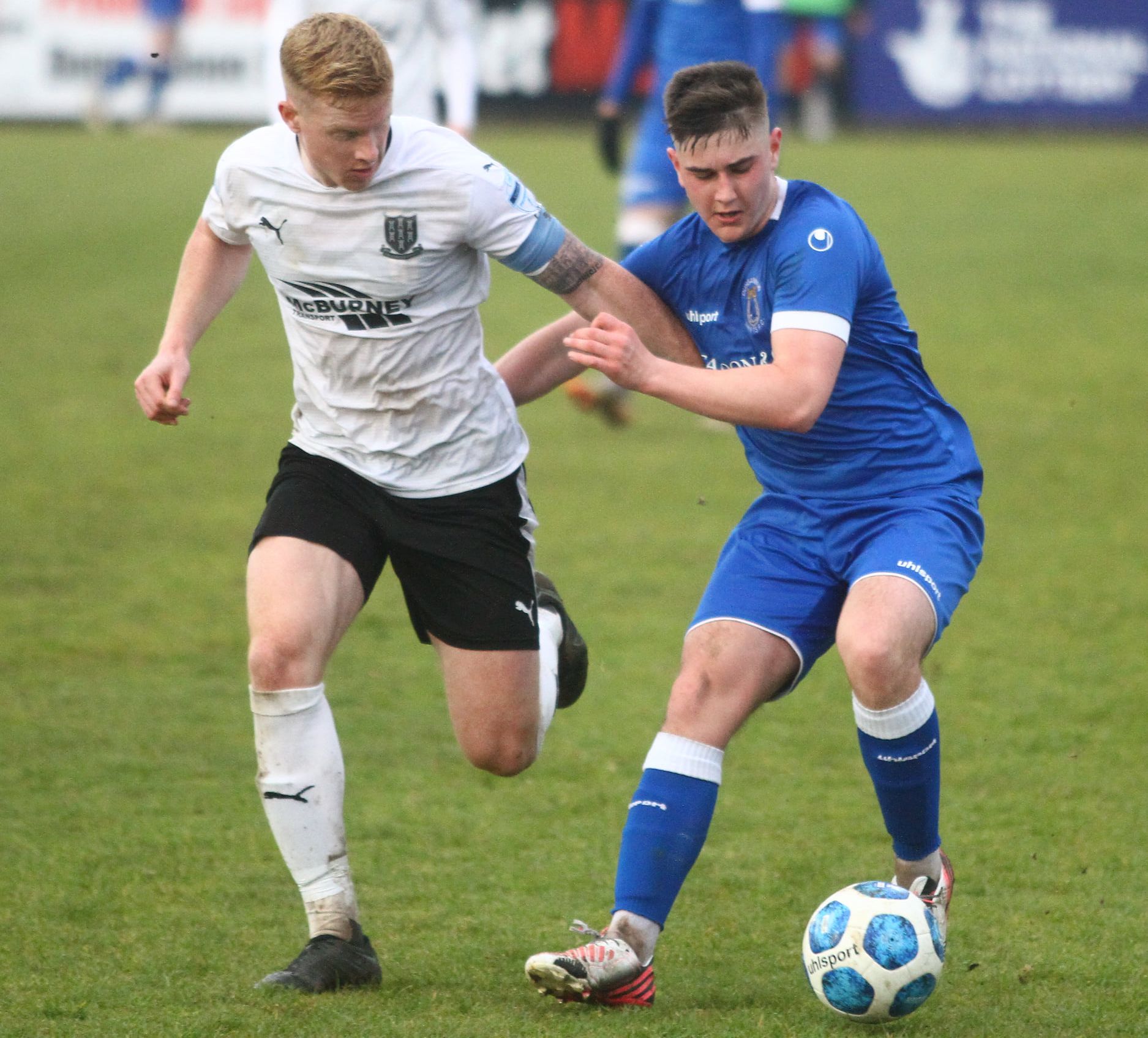 Ballymena United ended their 2021/22 league campaign on a high with a late comeback to defeat Dungannon Swifts 2-1 at a damp Stangmore Park on Saturday evening.

With next Saturday's Samuel Gelston's Whiskey Irish Cup final showdown with Crusaders in mind and offering some players a final chance to impress, David Jeffrey made eleven changes to the side that got them there on Tuesday night in Lurgan, including rare starts for Christopher Rodgers, Lee Chapman and Jonte Smith, plus a first start for Jordan McMullan.

Neither side had anything bar pride to play for in terms of the league, and that manifested itself in the first half with a far from glittering forty-five minutes. The opening half an hour yielded just one effort from either side, as first Ryan Mayse curled a shot well over, before a bouncing effort from McMullan was easily held by Dwayne Nelson.

United's best chance of the half came as Ballymena were just starting to somewhat probe towards the latter stages of the half. McMullan did well to find Paul McElroy at the near post, but after a neat turn he saw his goalward shot crucially blocked by the Swifts' Bilel Mohsni. Shortly after that chance came the hosts best effort on goal as Sean O'Neill was worked for the first time when Marc Walsh let fly from distance, and his powerfully hit shot forced O'Neill into a strong save over his crossbar.

In the final few minutes Terry Devlin saw a cross almost sneak in at the far post, while at the other end a number of Mikey Place crosses had no one on the end of them, as a half that felt like the final game of the season ended goalless.

The second half was a better contest as some of those in the visiting side looked to catch the manager's eye ahead of next weekend, but the half started badly as the home side broke the deadlock five minutes in. From a throw in down the left the ball was eventually worked to Oran O'Kane who fizzed a ball across goal, but unfortunately for Jordan McMullan he could only divert the ball past his own 'keeper at the near post to give Dungannon a lead.

Ten minutes later Dean Shiels' side went within inches of making it 2-0. Rhyss Campbell picked the ball up on the left and with ease made his way past those in white to get into the box, only to see his shot slide narrowly wide of the far post.

In the final twenty-five minutes the Braidmen began to control large parts of the game for the first time all day as they went in search of an equaliser. A big opportunity was passed up when a cross from Smith fell back to his feet, only for the Bermudan to a skew a good chance wide, before Smith did well to play in his strike partner McElroy, but he was denied by a last ditch Mohsni tackle.

After Malachy Smith and Ryan Waide made their way on for United, Mohsni should've finished the game off when he sent a header from a free kick over the bar by a matter of inches, but in the final ten minutes Ballymena showed good intent to find a leveller.

On eighty-three minutes Kenneth Kane had a go from the top of the box and saw his effort wonderfully tipped over by Nelson, but two minutes later it was 1-1. O'Neill's goal kick was helped on by a Dungannon player before Waide's flick on set Paul McElroy in, and he managed to beat Nelson to the ball to nick it past the 'keeper into the corner for his 11th league goal of the season.

With three minutes of normal time left McElroy made way for Nathan Clarke, who came on to make his senior Ballymena debut, and in his short cameo he helped United to all three points.

Within ninety seconds of being on the pitch a Waide cut back fell to Clarke but he couldn't sort his feet to finish, but in added time the youngster was sliced down in the box by Mohsni to give the Sky Blues a penalty in the dying embers. Andrew McGrory took the spot kick, and he fired home past Nelson to snatch a late win for United, who just about got the job done to finish the league campaign off nicely, with all roads now leading to Belfast for that Irish Cup final with Crusaders next Saturday.