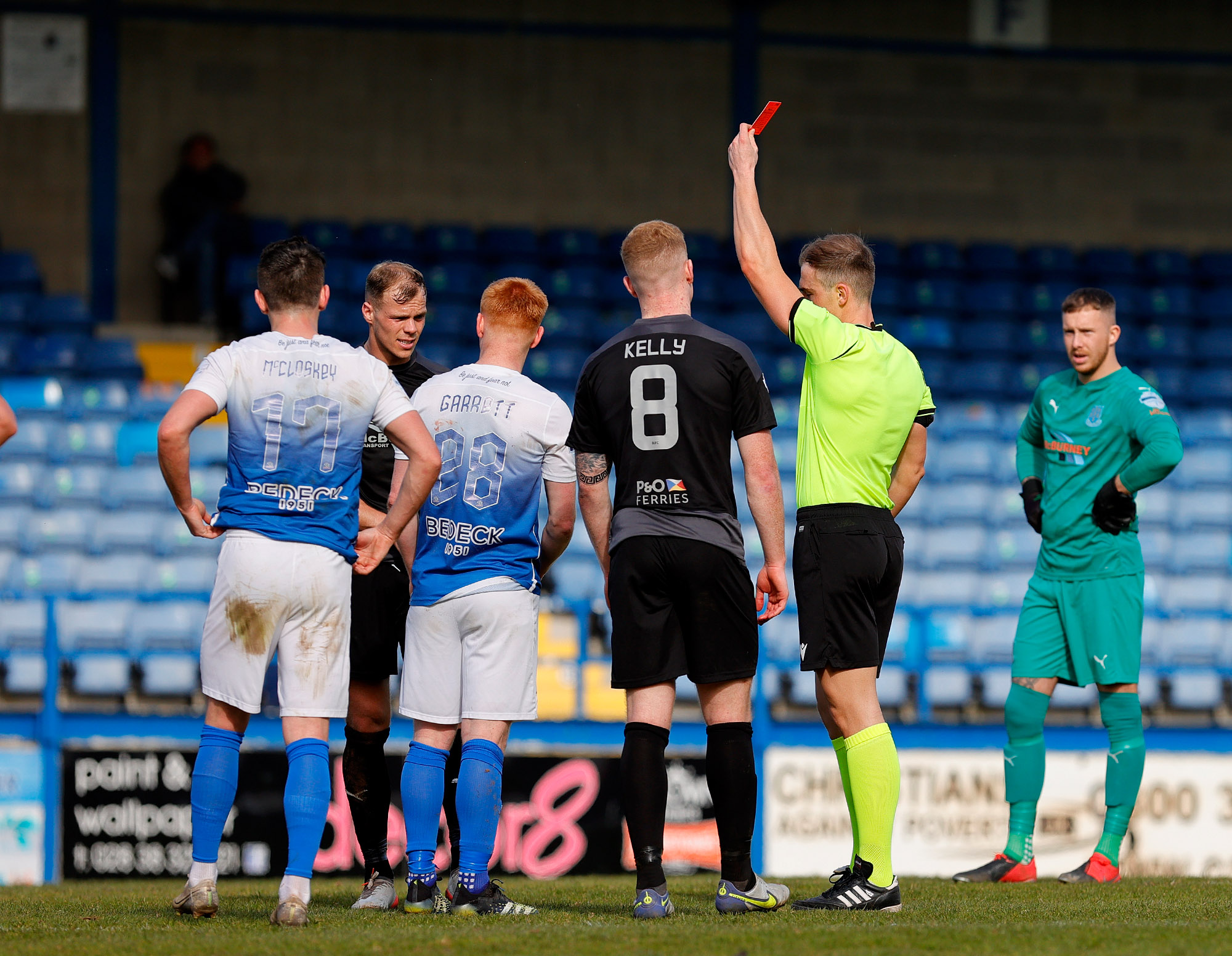 Ballymena United's European play-off hopes suffered a major blow as they surrendered a lead to fall to a 3-1 defeat to 10 man Glenavon at Mourneview Park on Saturday afternoon.

There were a couple of changes to the United side that starred in a win at Larne over two weeks ago, as Andrew McGrory replaced Malachy Smith, while Jordan Williamson was welcomed back after a long injury lay off, as he took over between the sticks from the injured Sean O'Neill.

In a huge clash in the race for the final European play-off spot, Ballymena started well against the side one point and one place above them. A typical driving run from Leroy Millar ended with the ball falling nicely for Joshua Kelly, but his sighter flew over.

As United continued their bright start, the hosts first chance didn't come until twenty minutes in, but Mark Haughey's shot was well blocked by Kym Nelson. With a quarter of an hour on the clock the Braidmen drew first blood in an open encounter. David Parkhouse was fouled wide left, giving Ross Redman a chance to whip a cross in, and it was met by Kym Nelson who guided a header into the Glenavon net to grab his first goal for Ballymena at a key time.

After a decent opening twenty five minutes to the game, the rest of the half was a much less interesting affair, with a good tussle becoming extremely stop start, as both sides and the officials struggled to keep the game moving.

With two minutes left in the half Millar was rewarded with a yellow card for what looked like a well timed tackle, and United's frustrations intensified when the resulting free kick led to a contentious equaliser. The delivered free kick was met at the back post by Calum Birney but saved down low by Williamson, but after some delay the assistant referee adjudged Birney's header had crossed the line, much to the bemusement of United's players and travelling support, as a strange half ended level.

The second half started evenly again and included a couple of half chances for the Lurgan Blues, but on fifty four minutes a huge opportunity presented itself to the away side as Glenavon conceded a penalty and were reduced to ten men once again. Michael Place was bearing down on goal when he was sent tumbling by Danny Wallace, and this time it was Glenavon left bemused by the officiating as Wallace received his second red against Ballymena this season for the denial of a goal scoring opportunity. The skipper stepped up to try and make it two successful spot kicks in two games, but Millar's poorly struck penalty was saved by debutant Josh Clarke to keep the game level.

With the man advantage United would've hoped to have pressed on towards vital points, but not for the first time this season the man advantage did them little good in a frankly disastrous final half hour. From Wallace's red the hosts became the better team and they passed up chances for Matthew Fitzpatrick as well as pinball in United's box on two occasions, while at the other end nothing was happening for Ballymena's forward men, with poor service struggling to find them.

With eighteen minutes left, ten man Glenavon took the lead with a goal that had been coming. It was poor from Ballymena as both McGrory and Ryan Waide failed to deal with a run into the box, and when the ball fell kindly for Peter Campbell just inside the box his first time shot was a peach as it flew in at the far post.

Within two minutes Ballymena's capitulation continued as Glenavon all but killed off the game, and possibly United's play off hopes, as they made it 3-1. The Sky Blues shot themselves in the foot again as Sean Graham was dispossessed before a long ball picked out Peter Campbell, and he rushed in on goal before finishing past Williamson to leave United's fans shell-shocked.

In the final fifteen minutes any few chances that came fell Glenavon's way as Ballymena struggled to hold the ball when they did have it, and a miserable second half was compounded in added time. Tensions had been bubbling throughout the half and they came to a head when Garrett and Millar needlessly clashed, which resulted in a silly second yellow for Millar as United's dire second half helped them to a hugely disappointing and damaging defeat.