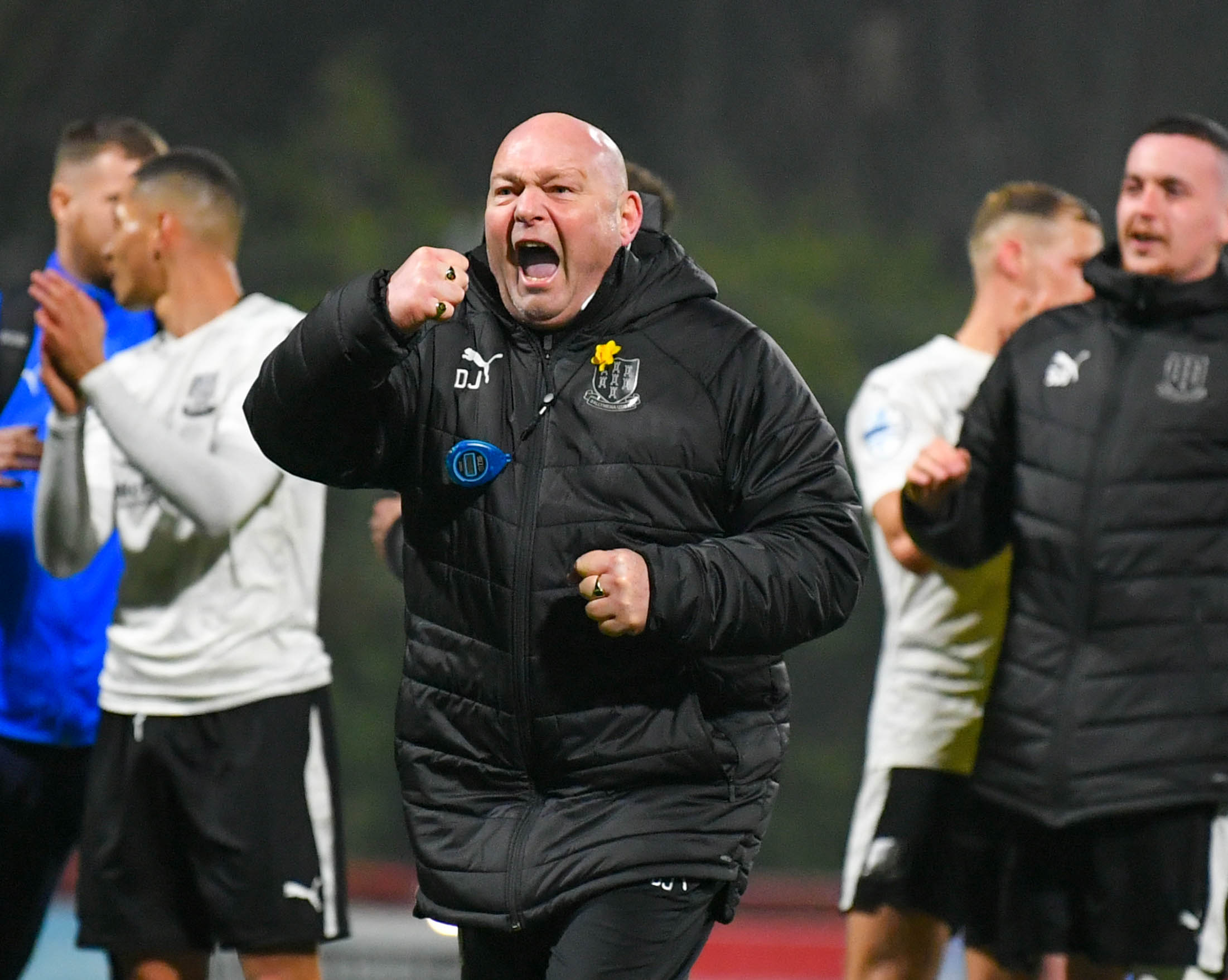 A David Parkhouse brace helped Ballymena United maintain the Shane's Hill derby bragging rights with a 3-1 victory over Larne after a stellar performance at Inver Park on Friday night.

There were two changes to United's starting line up to the one that drew with Glentoran six days ago, as Malachy Smith and David Parkhouse came back in for Andrew McGrory and Kenneth Kane.

Looking to put the pressure back on Glenavon in the race for 7th spot in the last pre-split game, Ballymena started well and took the lead just four minutes in. A good period of play from the away side ended with Sean Graham's cross from the left finding David Parkhouse, who finished beautifully with a first time finish in the middle of the box.

Larne came back fighting as Lee Bonis headed a corner just wide at the back post, before Sean O'Neill got down to deny Graham Kelly. On fifteen minutes the hosts came inches away from levelling when Ronan Hale had plenty of time to let fly from distance, only to see his effort crash off the crossbar, but three minutes later it was 1-1. Ben Doherty all to easily skipped his way through the middle before seeing his long range effort blocked by Kym Nelson, but it fell back to Ben Doherty for a second crack and this time he buried it in the bottom corner from the edge of the box.

In a topsy turvy opening half Ballymena got a grip back on the game after conceding and after Parkhouse had strong penalty appeals turned down, more good football from Graham saw his cross cleared out to Ryan Waide, and he was denied by a fine Conor Devlin save.

On the half hour mark, as Larne swayed the possession back in their favour for a good period of time, they rattled the woodwork for the second time when Kelly had time and space to shoot, but again the home side could only find the crossbar.

The Braidmen were forced into a first half substitute ten minutes from the break when Nelson sustained an injury just above the eye and he was replaced by Conor Keeley, as a tight, momentum swinging half ended all square.

The second half yielded quite possibly the Sky Blues' best performance of the season yet, in a stunning half of football at times. United started the half well and were building their way up to something when they were awarded a penalty fifty-six minutes in. A free kick in from Michael Place, who was outstanding again, caused a spot of pinball, but it was ended when Keeley's shot was blocked by the hand of Albert Watson. After lengthy Larne protestations, Leroy Millar finally got round to the spot kick, and he calmly sent Devlin the wrong way to put Ballymena back in front.

Again, the Inver Reds reacted well to falling behind, and just three minutes later the frame of O'Neill's goal was busy again. A corner was met by the header of John Herron, but his effort was helped out of play by the top of the bar again.

As the final twenty-five minutes approached, Ballymena took charge of proceedings with a sentilating spell of dominance. Parkhouse showed incredible skill down the left wing before picking out Place in the box, however he sliced his attempt wide, but shortly afterwards it was 3-1 with sensational team goal. After knocking the ball about the back four and keeper with a string of passes, Malachy Smith, who had his best game in a United shirt, knocked one long for Waide. Waide, who was almost unplayable at times in the second half, lobbed the ball goalwards with Devlin off his line, and his ball was met by David Parkhouse who headed home at the back post for his second and Ballymena's third.

Paul McElroy was introduced on seventy-seven minutes and within two minutes easily could've made it 4-1. Waide was causing all sorts of problems again and great skill took him to the byline, and from there he picked out his strike partner, but from close range he turned it over.

The hosts had most of it for the final ten minutes but rarely threatened with the visitors' defence watertight, as United heaped more misery on their rivals in a performance from the very top drawer, with the management and players making a point of showing their appreciation to the travelling support at the end.