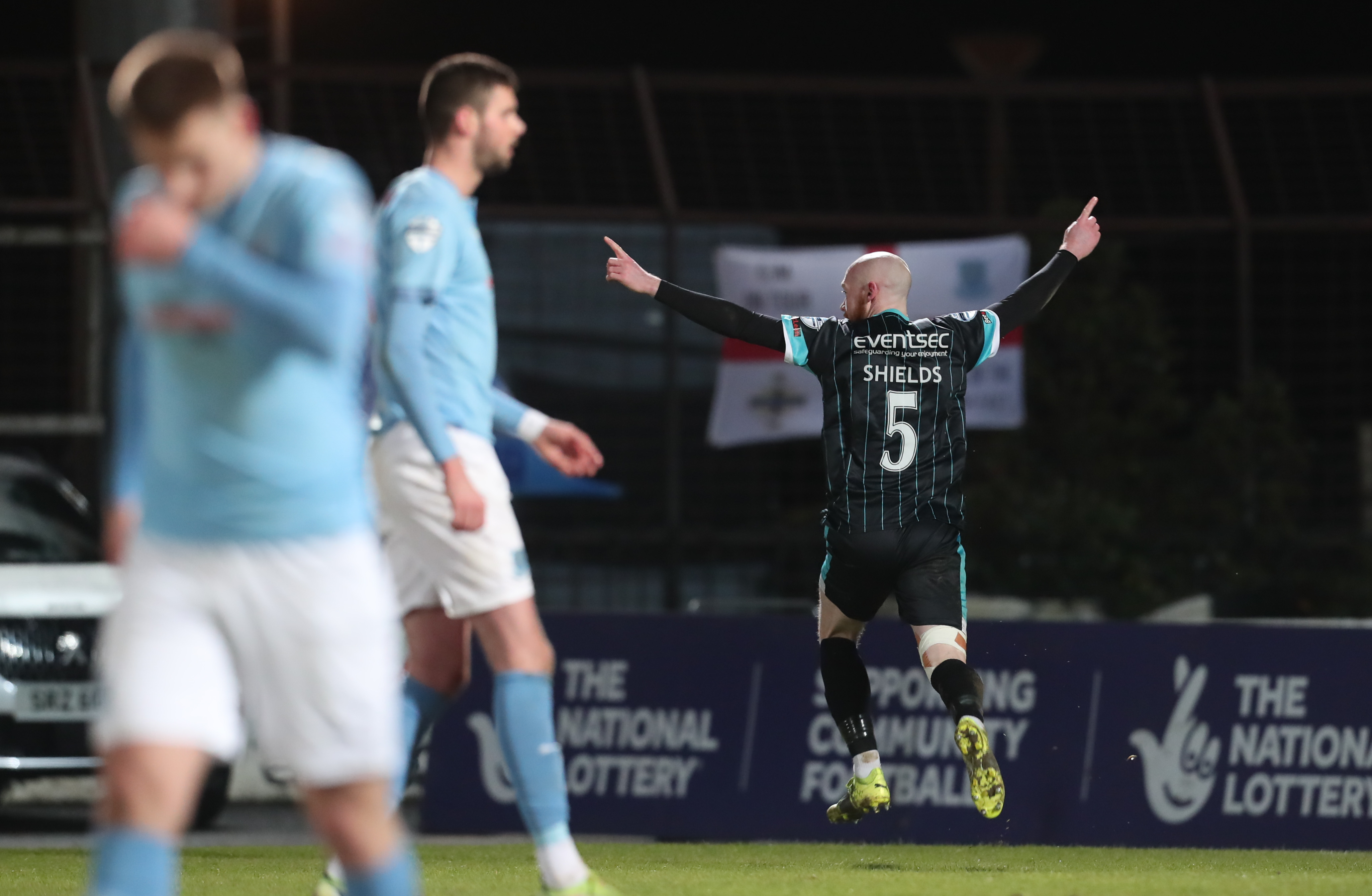 A goal in each half saw Ballymena United's eleven game unbeaten run at home ended with a 2-0 defeat to ten man Linfield on Tuesday evening.

After a gruelling 120 minutes, before coming through on penalties against Larne in the Irish Cup, David Jeffrey freshened things up with six changes right across the pitch.

Despite the Champions and league leaders being in town, Ballymena made a bright start to the game, with Leroy Millar going closest with an overhead kick that was saved by Chris Johns. Linfield's first opening came via their danger man Christy Manzinga when he got a run together on the left, but he cut in and fired wide.

With half an hour approaching United were arguably controlling the game, particularly in midfield with Millar, Kym Nelson and in particular, Brendan Barr causing problems with their press, but in a game of few chances it looked like a slice of good fortune might be required to break the deadlock, and after Stephen Fallon had fired over from close range after good work from Manzinga, Linfield took the lead with a bizarre goal. Kyle McClean whipped a free kick into the United box from the left, but just as the ball looked like it had cleared everyone in the box, Steven McCullough unfortunately couldn't have placed a header in a worse place as he put through his own net with nobody particularly close to him.

After an encouraging opening half hour, the goal rocked the hosts and it could easily have been two in two minutes when Christopher McKee slipped in Manzinga, but Sean O'Neill got down well to deny the striker.

That chance would prove to be Manzinga's last as the Frenchmen was sent off on thirty-nine minutes with a straight red. Manzinga had been lucky to get away with a kick out at Caolan Loughran earlier in the half, but this time he again hit out at the same player off the ball, receiving a red for his troubles second time round.

With the man advantage for the second half, the Braidmen would've been no doubt looking to press on and get something from the game, but it never materialised in a lackadaisical second half showing. The first fifteen minutes couldn't have been quieter, with Linfield gaining a strong hold on the play, despite being a man down. McCullough made way for David Parkhouse just before the hour mark, before United threatened with a sniff of an equaliser, but after a scramble in the box Andrew McGrory sliced one well wide.

Edging towards the final twenty minutes Ballymena were still unable to get anything going, while both goalkeepers were left twiddling their thumbs for the most part. A triple change provided the home side with a chance to try and spark the half into life, with Paul McElroy, Joshua Kelly and Michael Place all coming on, and minutes later another forward was thrown into the mix as Jonte Smith came off the bench.

However, it was much the same with the new boys on and on seventy two minutes Linfield had the chance to double their lead from the penalty spot. Jamie Mulgrew was given time and space to drive into the box, where he was brought down by Sean Graham. Chris Shields was the man to step up, and he sent O'Neill the wrong way to give the Blues a two goal advantage.
The hosts did at least manage a few shots in the final ten or so minutes, but long range efforts from Ryan Waide and Place were easy work for Johns, with Ballymena passive and too slow to get the ball forward more often than not.

Kelly almost pulled one back late on when he struck just over from the edge of the box, but after a decent opening half, United were left to rue a really disappointing second half showing as Linfield maintained top spot in the league.