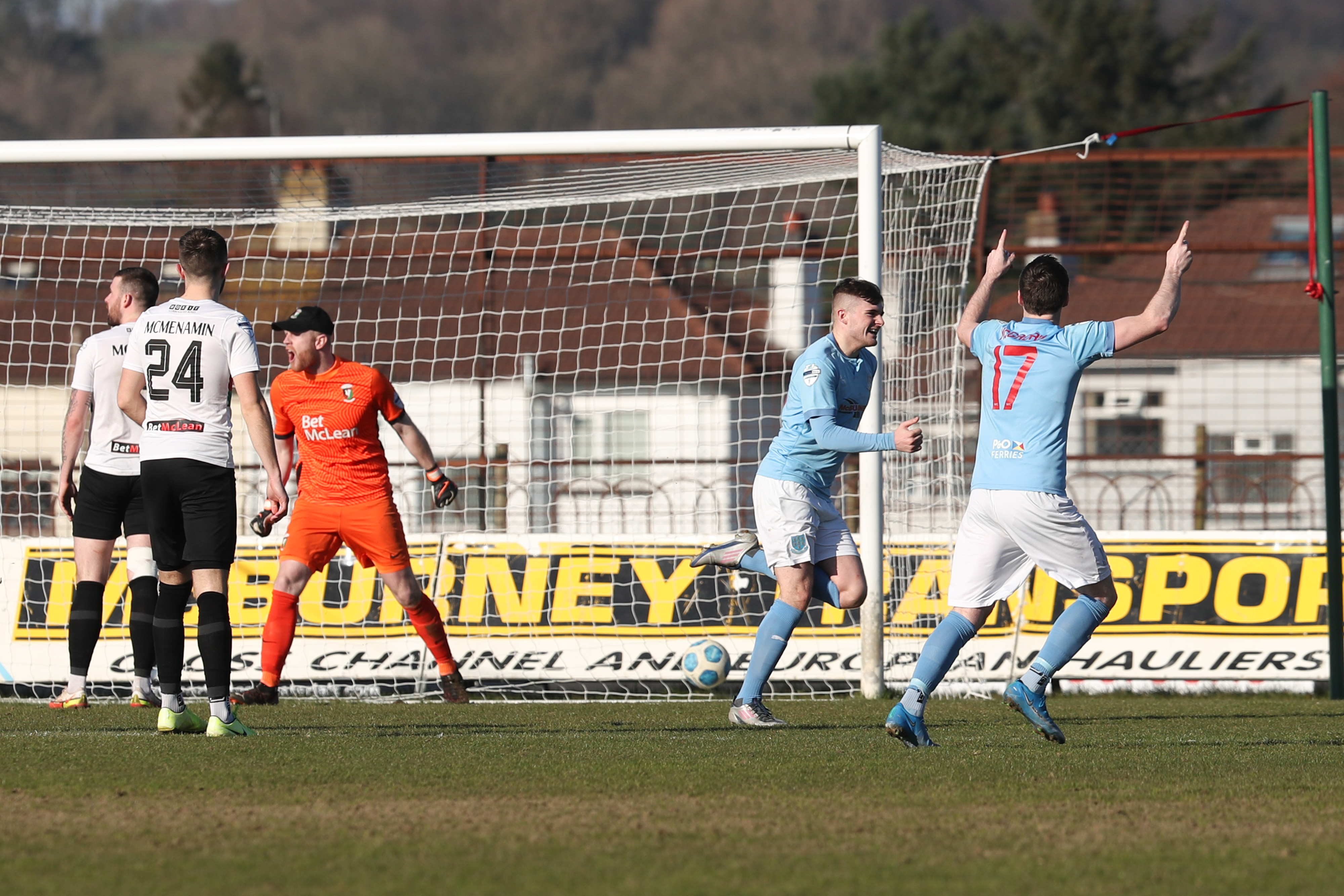 A much improved Ballymena United grabbed a more than deserved point off title chasing Glentoran with a hard fought 1-1 draw at the Showgrounds on Saturday afternoon.

There were five changes from the midweek defeat to Crusaders for United, including a return to goal for Sean O'Neill after sitting out against his parent club, whilst that same reason saw Malachy Smith replaced by Andrew McGrory.

After three straight defeats David Jeffrey's men needed to respond against one of three horses in the title race, and from minute one signs were there of improvement from the Sky Blues. In the opening five minutes Shay McCartan, who many in the home end were seeing at the Showgrounds for the first time after behind closed doors football during his time here, and Leroy Millar traded decent solo runs, but without the finish to match.

On eighteen minutes United failed to clear their lines from a Glens corner and that allowed Sean Murray to get a shot off, but it was blocked by a sea of sky blue shirts. That was the only time the hosts were really threatened in the opening half hour, with United more than matching what Glentoran had to offer.

After a well battled thirty-five minutes that hadn't yielded a host of chances, the away side put Ballymena under their first bit of pressure for a ten minute spell to half time. When a cross landed at the feet of an in form Conor McMenamin United could've had cause for concern, but he was denied by a brilliant block from Sean Graham, before the same man saw a dangerous ball across United's goal cut out in the nick of time. As added time approached O'Neill was worked for really the first time all half when a corner came back out to Murray, and as he tried his luck from the top of the box, his curling effort was tipped over by O'Neill, as an even half ended goalless.

The second half was started extremely well by United and they were almost ahead three minutes in when Kym Nelson's miss hit volley from the edge of the box bobbled its way into the path of Leroy Millar, but from close range Aaron McCarey got out just in time to deny Millar the chance to finish. However, on fifty minutes McCarey was beaten as the Braidmen broke the deadlock. A long throw from Michael Place was flicked on by Kenneth Kane, and after Glentoran made a mess of clearing their lines the ball fell to Ryan Waide six yards out, who slammed home his second goal of the week.

Despite not working McCarey often, it was a goal United deserved with a fine team performance to a man, but just five minutes after scoring Ballymena gave the visitors a way back to level terms from the penalty spot. McCartan drove with the ball into the United box and Nelson was rash in going to ground and bringing down McCartan. Jay Donnelly, who was barely afforded a kick all game, down mainly to Ross Redman's exemplary performance, took the spot kick and sent O'Neill the wrong way to level.

With recent goals clearly bringing an air of confidence and quality back to Waide's game, he almost scored a solo stunner within two minutes of the equaliser, but he ended a dazzling run by firing over the crossbar by a matter of inches on the edge of the box.

From the hour mark onwards the Glens took control of the game, but their riches of attacking options were met by a resilient home side. Jay Donnelly and McMenamin combined to send the latter in, but he was denied by a super O'Neill save round the post. The corner led to another chance that was fantastically cleared by an outstanding Graham, and from the third corner O'Neill pulled off another top stop after a flick at the near post.

In the final fifteen minutes Glentoran's possession rarely led to chances, with their only chance of note seeing McMenamin divert a Robbie McDaid cross over the bar, as Ballymena saw out a thoroughly deserved point to dent their opponents title hopes and boost their own confidence levels ahead of huge games in the league and cup.