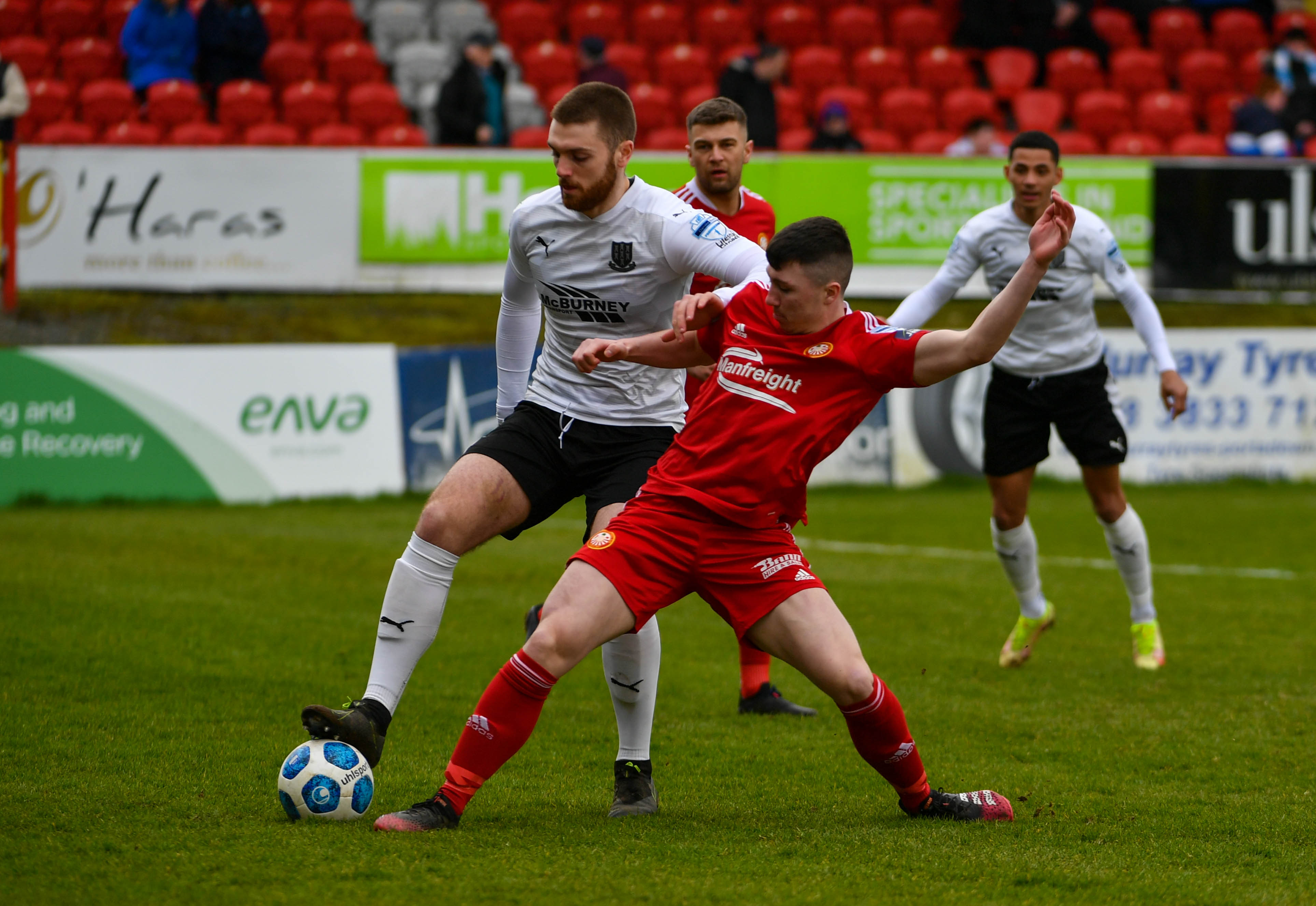 Ballymena United lost ground in the battle for European play-off places after a 1-0 defeat to Portadown in a low quality affair at Shamrock Park on Saturday afternoon.

United made five changes from midweek for the trip to Mid Ulster, including a return from injury for Conor Keeley, while Malachy Smith returned to the bench after also missing the Linfield game on Tuesday.

The opening exchanges of this one set the tone for the rest of the game, with good passages of play few and far between in a stop start game throughout. Ballymena started the better, but the hosts carried a threat on the break and from one of those breaks Stephen Teggart was played in by Adam Salley, but saw his shot blocked just wide by Michael Place.

Despite being one of United's three centre back's, Ross Redman continued to offer up crosses, and when one of his balls in was missed by Place it fell to Paul McElroy at the back post, but he saw his shot tipped over by Jethren Barr. Minutes later McElroy had another good chance when a nice Ballymena move ended with Kym Nelson cutting the ball back from the byline for McElroy, but the number 9 fired over.

As the half progressed the ball found itself in the air more often than not, and after Teggart had struck just wide for the Ports, a route one ball from the 'keeper Barr helped Portadown into a 1-0 lead. Barr's goal kick landed to Adam Salley halfway into the United half, and from there he was somehow allowed the time and space to turn and run, before he let fly from a good twenty-five yards and his unstoppable strike left Sean O'Neill routed to the spot.

Salley and Place traded half chances at either end that were easy pickings for both goalkeepers, but in four minutes of added time Keeley went close to levelling. Steven McCullough did well to pick out Redman at the back post and he headed across goal for Keeley, but he fired over the huge opening as a slog of a first half saw Portadown ahead.

Andrew McGrory replaced Place at the break for United, with the former Galway man on a booking, but the second half was arguably a more scrappy and almost hard to watch at times half than the first.

McElroy and David Parkhouse were starved of any real service throughout but when Redman did get a cross in for the latter, he couldn't get enough on a header to direct it goalwards. That half chance was one of Parkhouse's last involvements in the game when he was forced off through injury on fifty-six minutes, with Ryan Waide coming off the bench.

It was the Braidmen dominating the ball for the majority of the second period, but all too often Ballymena looked long to create chances, and it rarely paid off, with a number of stoppages for injuries taking any chance away that the game had of flowing.

The more the vistors advanced forward the more space it left Portadown on the counter, and when slack defending allowed Teggart to charge forward, he saw a rising shot tipped over by O'Neill.

In the final twenty minutes some chances finally began to fall Ballymena's way, as Josh Kelly saw a header from a corner held by Barr, and a flicked header sent goalwards by McGrory was hooked off the line by Greg Hall. David Jeffrey's second sub saw Caolan Loughran make way for Brendan Barr, and the Derry City loanee looked like the one player who could make something happened following his introduction. A delightful scooped dink from Barr found Leroy Millar inside the box, and his near post shot was forced out for a corner by the glove of 'keeper Barr, before an incredible chance passed Ballymena by twelve minutes from time.

After a corner was cleared out as far as Redman, his low, threaded ball made its way through everyone in the box to find Keeley. The big centre half rounded Barr to leave the goal gaping from close range, but almost unbelievably Keeley sent the ball over the crossbar when it looked harder to miss.

By the final five minutes Redman had made way for Kenny Kane and with Keeley now up top, Nelson was the only line of defence for United, with Portadown hemmed into their own box. A great ball from Barr found McGrory in space, but with limited options in the box he took the shot himself and found the side netting.

With everyone up for United, the Ports would ultimately hit them on a break, and when they did Billy Steadman moved the ball forward for Teggart who raced away to settle it, but was denied by a fine O'Neill stop.

With the final kicks of the game a Nelson ball across goal was missed by three Ballymena players in space, to rather sum up United's day as they lacked any real quality or bite throughout to hurt their relegation threatened opponents, in a game of football best forgotten.