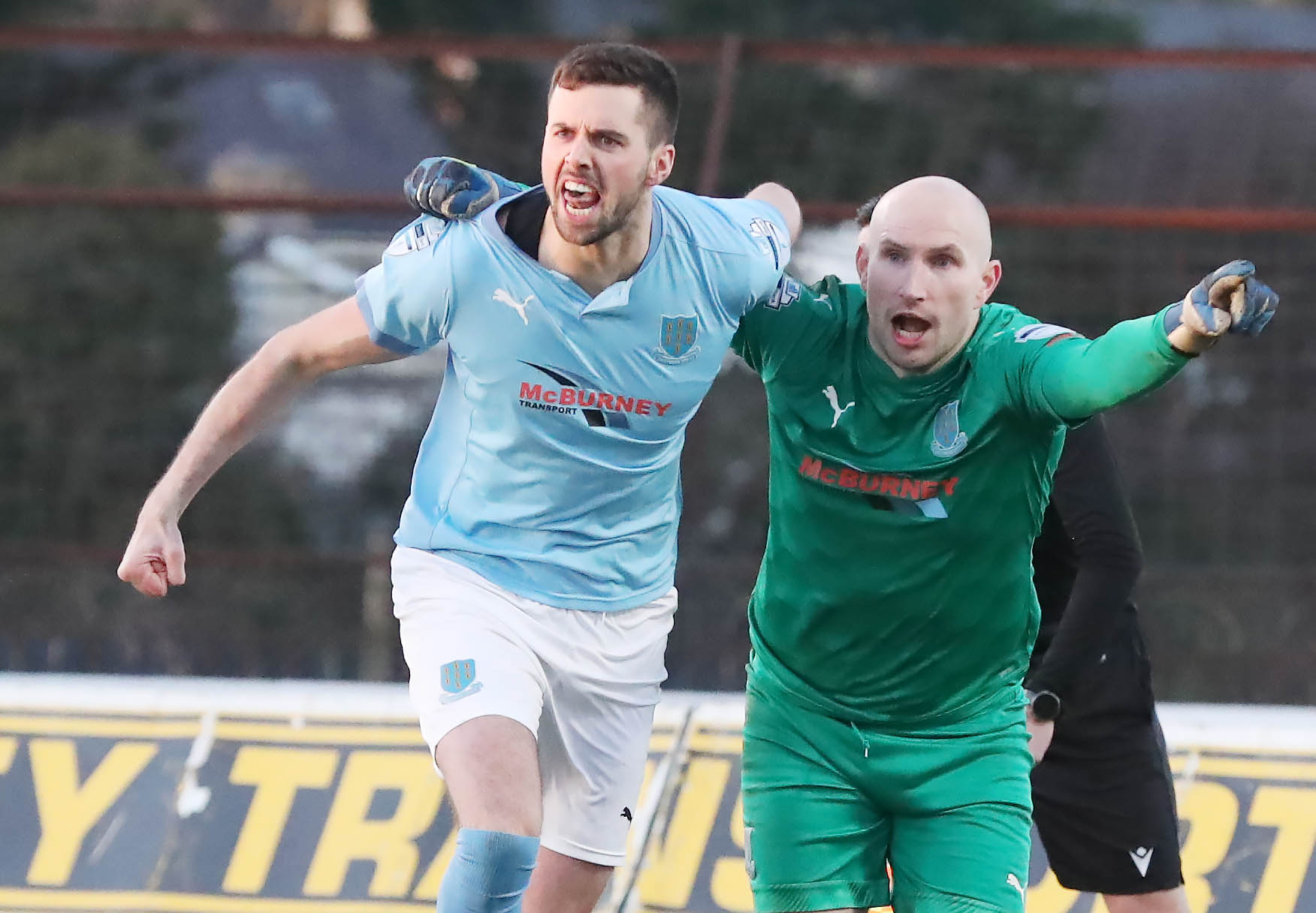 Ballymena United progressed to the semi-finals of the Samuel Gelston Whiskey Irish Cup in style with a thrilling penalty shoot-out win over rivals Larne, after a 3-3 draw AET at the Showgrounds.

Conor Keeley returned from suspension in one of three changes to the team from last Saturday, with David Parkhouse and Mal Smith back in the starting XI too.

On one of the biggest days of the season in rare sunshine at the Showgrounds, Ballymena seen a disastrous start have them two goals behind inside fifteen minutes. In an all too easy move Lee Bonis found Andy Scott who moved it on to Lee Lynch, and his first time shot on the eighteen yard line took a deflection and went over Sean O'Neill's head. It got worse on fourteen minutes as Kofi Balmer's route one ball from well inside his own half somehow made its way through to Lee Bonis, who got ahead of Keeley before finishing with an extremely tidy first time shot across his body into the far corner.

With Ballymena's backline all at sea and Larne rampaging on, it should've been 3-0 and game over on twenty minutes. Ben Doherty duked his way into United's box with ease before having a shot wonderfully saved by O'Neill's legs, before Andy Scott put the follow up over.

After getting out of the first twenty minutes just two down, Ballymena had a way back into the tie when Paul McElroy was brought down in the box by Jeff Hughes, with a penalty given after a lengthy delay. Paul McElroy dusted himself down and dispatched the penalty down the middle to half the deficit.

The hosts thought they were level just two minutes later, but David Parkhouse was adjudged to have fouled Conor Devlin when heading home, and three minutes later Larne restored their two goal lead. Lynch's corner from the left was allowed to drop inside Ballymena's six yard box, and at the back post Albert Watson was on hand to bundled the ball home against his former club.
Ballymena reacted well to the fourth goal in a chaotic first half, and Steven McCullough saw a strong volley well held before a curling Leroy Millar strike after a driving run was stunningly tipped onto the crossbar by Devlin.

With the last play of a breathtaking half United once again got within one with the games fifth goal. McCullough burst down the left hand side in plenty of space and his inch perfect cross was headed off the underside of the bar by David Parkhouse, and after some hesitation the officials agreed the ball had crossed the line.

The first half had been unpredictable and mad from start to finish, but the second period was a real slog with an extremely scrappy game being played out, mainly in the air. Larne looked a far more vulnerable outfit in the second half, and that was highlighted when Devlin's goal kick was smacked straight into McElroy, but he passed up the glorious chance to level with his shot straight at Devlin.

Straight down the other end the Invermen blew a huge chance of their own as a McCullough mistake saw Ben Doherty race clear on goal, but he was delayed in shooting before firing over the crossbar. After fifteen minutes of virtually nothing happening, injuries began to set in for the part time side, with Keeley forced off on his 50th appearance, while Smith made way for Ryan Waide.

With eleven minutes to go and United, whilst not peppering the Larne goal, certainly the better team, the home side equalised through the in form Michael Place. Ballymena won a free kick near the touchline, and Place's delivery flew straight over everyone, including Devlin, to dramatically bring the Braidmen level. With both teams seemingly happy to take it to extra time, Ballymena almost won it in added time when Parkhouse outmuscled Watson to latch onto Place's long ball, but he fired wide as a ridiculous derby ended level in normal time.

After such a scrappy second half and tiredness now clearly setting in, for both teams to be fair, extra time wasn't a chance laden affair. Larne's Bonis went closest in the first period, but his misguided header was well wide of O'Neill's goal. United brought another body on from the bench as Parkhouse was the next to pick up an injury, as he was replaced by Kenny Kane.

After looking well off the pace for most of the game, Larne looked a bit more threatening in the final fifteen minutes. Substitute Andy Mitchell looked to have won it for the visitors with a long range strike, but he was denied by an unbelievable O'Neill save, with the 'keepers leadership skills coming to the fore again today. United's final chance saw a great run from Kane take him to the byline, with his ball narrowly turned wide by a Larne boot, but with penalties surely in mind, David Jeffrey brought on Andrew McGrory and Caolan Loughran as a cracking tie went the distance.

At the Slemish End, Larne went first and after Mitchell and McElroy traded goals, O'Neill denied Matty Lusty and Millar scored. After Waide kept Ballymena ahead, another O'Neill save kept out Bonis to give McGrory the chance to send Ballymena through, but he skied his penalty. McDaid kept the game alive, leaving Loughran the final kick, and the local man was the hero once more as he found the top corner to send a gritty, determined and fighting to the death Ballymena into the semi-finals with a huge comeback win.