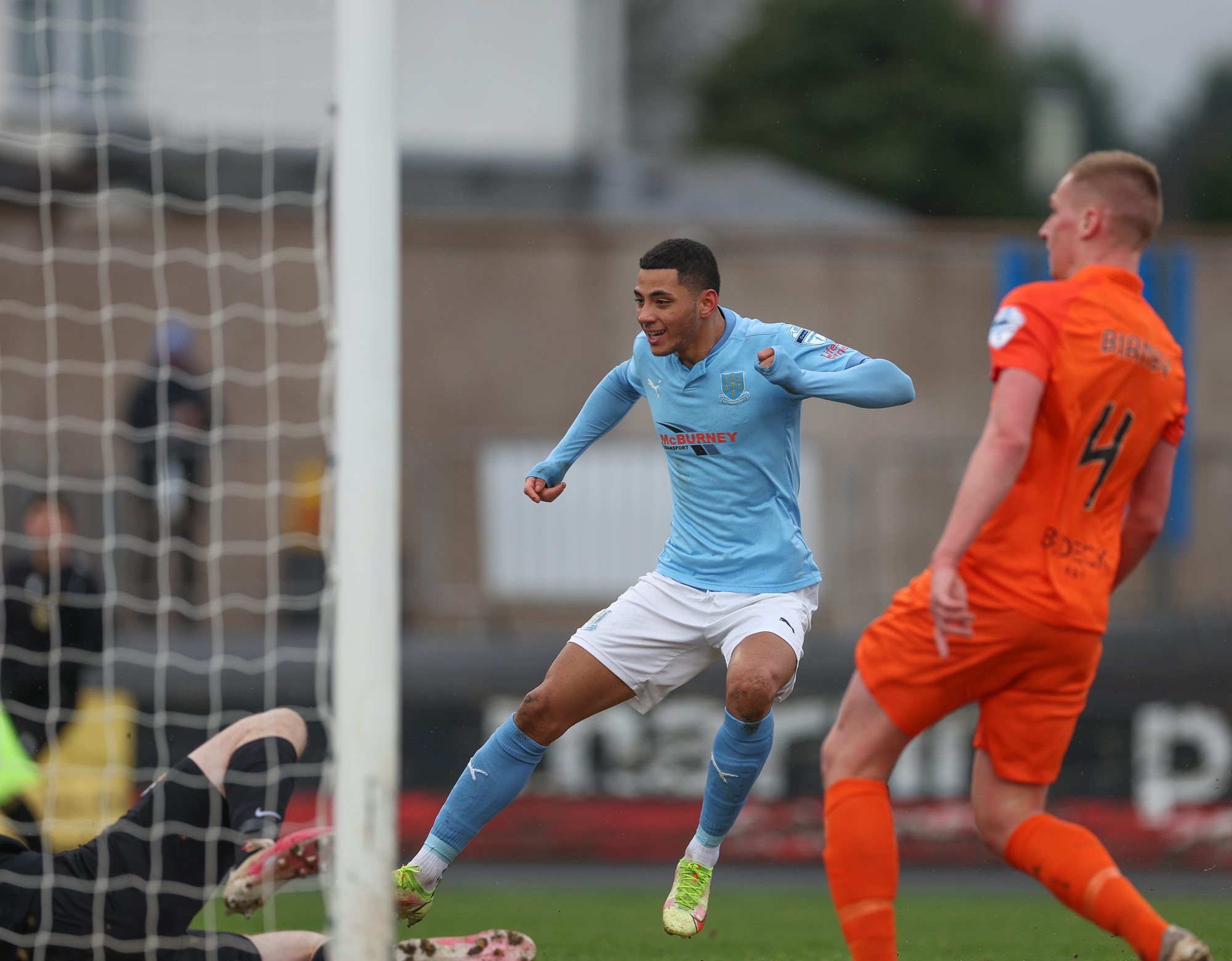 10-MAN Ballymena United had to settle for a point against 9 man Glenavon after an ill tempered and frantic thriller ended 3-3 at the Showgrounds on Saturday afternoon.

David Jeffrey was absent from the touchline after a positive Covid-19 test, but made one change to the team guided by Bryan McLoughlin as Sean Graham replaced Kym Nelson.

Today's encounter in Ballymena had huge implications in the battle for top six and European places and after a strong start from the visitors, they led seven minutes in. A low ball in across the six yard box from Peter Campbell wasn't dealt with by Conor Keeley who couldn't clear, and that allowed Matthew Fitzpatrick to finish at close range
.
Ballymena reacted well to falling behind early on and almost levelled when Keeley teed himself up for an overhead kick, but his acrobatic effort was saved by James Taylor. However, on twelve minutes the hosts were level as Michael Place made it two in two. Brendan Barr did well to carry United forward before Leroy Millar's fired ball across goal from wide was missed by everyone except Michael Place at the back post, and he tapped home his first league goal.

After the flurry of activity early on both teams settled down and to their credit looked to get the ball and play on the difficult surface. Crosses into United's box were proving challenging to deal with and on twenty five minutes the Lurgan Blues really should've been back in front. A Campbell cross was met by James Singleton who forced Sean O'Neill into a stunning stop, but he could only palm the ball to Mark Haughey who was inside the six yard box, but somehow he blazed over.

It was end to end but the better chances fell to Glenavon towards the end of the half, as Calum Birney headed just over from a corner and a stunning last ditch Ross Redman tackle denied Fitzpatrick a shot, but with the final kick of the half the Sky Blues turned the scoreline around.
A foul on Ryan Waide on the touchline led to a scuffle that saw Waide and Danny Wallace cautioned, but from the resulting free kick Place found the head of Conor Keeley who glanced his header over Taylor and in to make it 2-1 at the break.

If Ballymena had ended the first half well, Glenavon started the second half in the same fashion as they levelled at 2-2 less than thirty seconds after the restart. After Keeley had provided a crowd pleasing spin to bring United out from their own box, the Braidmen easily relinquished possession to Glenavon. The ball eventually fell to Peter Campbell on the edge of the box and he produced the most delightful of spins to take two Ballymena players out of the game, before he neatly slotted the ball past O'Neill.

Michael O'Connor and Steven McCullough traded chances from a free kick and a header respectively, before on fifty five minutes an almighty brawl saw both teams reduced to ten men in a heated few minutes. Fitzpatrick raced clear before going down despite no contact after Redman's attempts to win the ball. With Redman unhappy at Fitzpatrick's antics and Fitzpatrick sure he was fouled, a two man argument became a massive fall out involving everyone on the pitch. After enough incidents that could've warranted countless cards, referee Raymond Crangle eventually booked Redman and Fitzpatrick, before brandishing two yellow cards in a matter of seconds to Keeley as he saw red.

Fitzpatrick was lucky not to see red himself, but eventually Glenavon were reduced to 10 men themselves as Wallace received his second yellow for his part in the brawl.

After the fall out was finally dealt with, Ballymena failed to get going with Glenavon reacting far better to the flashpoint. Fitzpatrick had a tame effort saved by O'Neill, but on sixty nine minutes the visitors were back in front through ex-Sky Blue Conor McCloskey. A through ball found McCloskey who cut inside and let fly from distance, with O'Neill only able to get fingertips on the ball as Conor McCloskey found the top corner, before making a point to the United fans who he celebrated in front of.

Rocking from the Keeley red and McCloskey goal, Ballymena needed to get back into the game, and they were given a chance to do so when Glenavon's ill discipline again saw them reduced to nine men. Place and Robbie Garrett ended up on the floor after a collision, but in full view of the fourth official Garrett gave Place a boot to the midriff, giving Crangle the easy task of a straight red.

With surely little else left to happen on Warden Street there was time for more drama as United equalised again on seventy nine minutes. A corner was cleared as far as McCullough, and his ball into the back post was attacked by both Birney and Paul McElroy, but it was Paul McElroy claiming the final touch as the ball bundled its way past Taylor and into the goal for 3-3.

Now a man up and level with ten to go in a strong contender for game of the season, Ballymena looked to come on strong against a Glenavon side understandably set up for a point. Despite the introduction of Kenneth Kane and David Parkhouse to add more firepower, United didn't really make their man advantage count with limited chances. A Redman cross was headed wide by Millar, before McCullough curled an effort just over two minutes from time. In five minutes of added time the Sky Blues gave it a go but couldn't trouble Taylor as the curtain came down on a controversial, but pulsating afternoon at the Showgrounds, with a draw in amongst the madness probably a fair result.