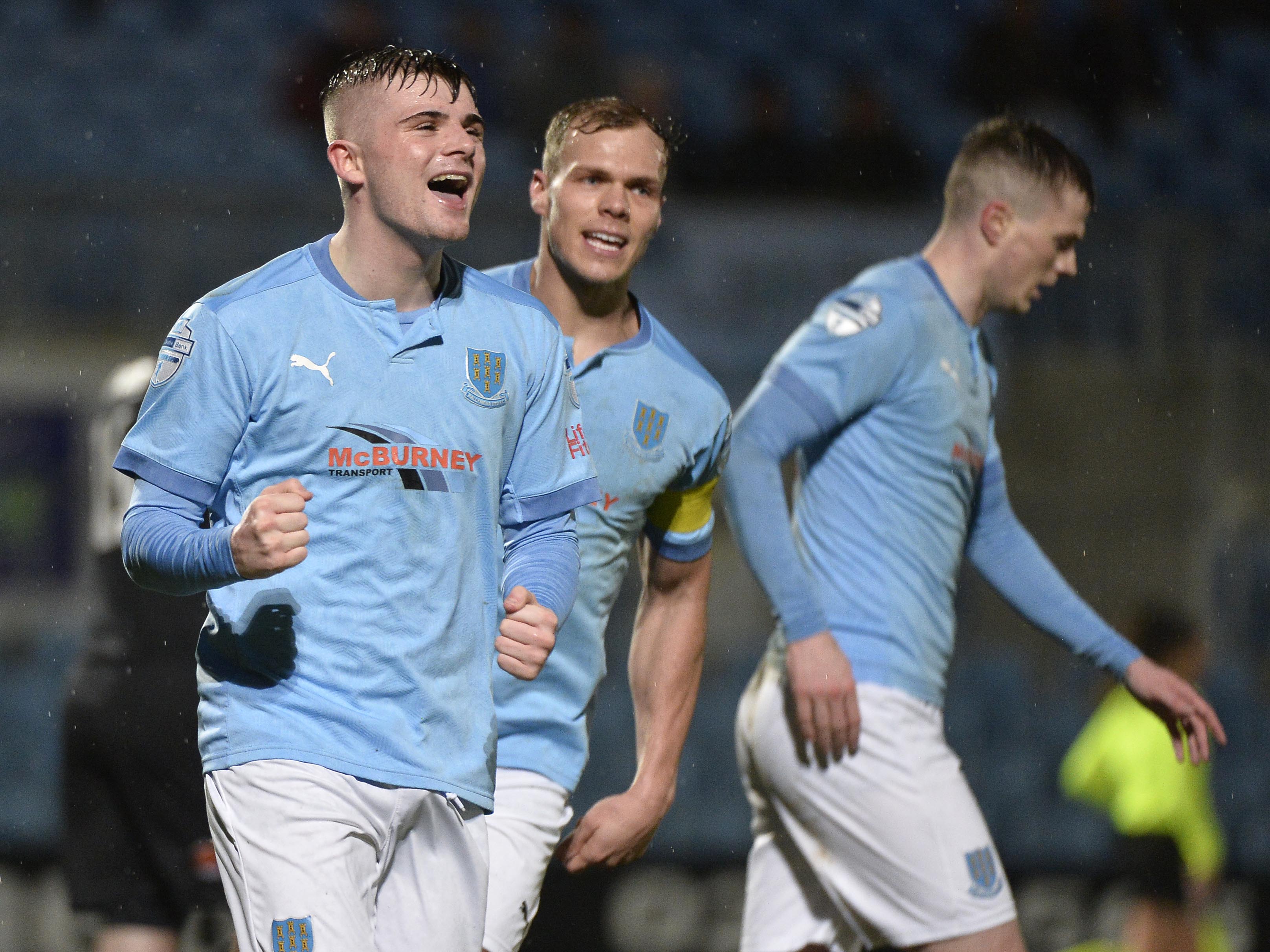 Ballymena United eased into the quarter finals of the Samuel Gelston's Whiskey Irish Cup with a comfortable 3-0 win over Portstewart on Tuesday evening at the Showgrounds.

There were three changes to the Ballymena side that edged past Dungannon Swifts late in the day on Saturday, as Ryan Waide, Paul McElroy and Saturday's match winner Steven McCullough all returned. David Parkhouse, Kenneth Kane and Sean Graham all dropped to the bench.

After the first attempt at playing this second round tie was shelved due to a waterlogged pitch ten days ago, it was an equally bleak night on Warden Street this time round, with the Showgrounds surface clearly just about playable. It was a fairly quiet start as can often be the case against sides leagues apart, with conditions far from helping. The first chance eventually fell the way of the Premier Intermediate League side, as a low free kick from Mark Edgar was well saved by Sean O'Neill, who did well to keep the follow up out, despite a flag for offside.

On seventeen minutes, the Sky Blues opened the scoring as they began to grow into their stride. The goal was scored by Waide, but it was all about McElroy in the build up. Leroy Millar played a lovely ball down the flank for McElroy to chase, and he delightfully took it past Karl Steele with strength and skill, and put a cross on a plate for Waide to tap home.

Following the goal it was virtually all Ballymena the whole way in but, despite dominating the ball by some margin, clear cut chances were few and far between. Despite playing at centre half, Ross Redman was a constant threat from crosses, and with the closest United came from his deliveries, McElroy headed wide. The Seahawks 'keeper Andrew Findlay didn't always look sure of himself, but after spilling a long ball into the box to the feet of Conor Keeley, Findlay did well to redeem himself with a block.

McElroy almost made it 2-0 when he waited on a cross to sit up nicely before sending a half volley just wide, but three minutes before the break Portstewart gave United a warning sign that one goal mightn't be enough when a well executed volley on the edge of box flew just wide off the boot of Zach Barr, but a fairly workmanlike half ended 1-0 to the hosts.

Knowing a second goal would make it a doubly difficult task for the men from the coast to get back into the tie, Ballymena started the second half well and had a second within two minutes. Seconds after McElroy had appeals for a penalty waved away by Tim Marshall, a fantastic ball from Keeley was headed across goal by Waide, who returned the favour for McElroy from earlier, as the number nine headed home from close range.

With the hosts grip on the game now firmly strengthened they went about a third goal. Michael Place had been on the end of countless fouls from the visitors and another one allowed Redman to whip in a free kick, which Waide headed wide. However, the tie was wrapped up on fifty-five minutes as Place made it three with his first goal in Sky Blue. Redman was again the man on hand to assist as his inch perfect first time ball was met by Place, who did well to get down low and steer a glancing header into the far bottom corner out of the reach of Findlay, to notch up a first goal that performances so far deserve.

With the tie effectively over, the rain gathering momentum and the pitch becoming more and more difficult to play on, it's no surprise the final half hour was fairly uncontested. A quadruple sub from David Jeffrey gave twenty five minutes to Dan Bramall, Chrissy Rodgers and Graham, while Kane replaced Waide who went off with an injury.

Despite Portstewart going large amounts of time without seeing the ball, they almost pulled one back when Barr got the better of Rodgers to get a shot away at the near post, but his strike came off the outside of the post. Parkhouse was introduced for the Braidmen's fifth change as he replaced McElroy, and an exquisite scorpion flick from Parkhouse over his marker nearly gave him a chance for a stunner, but Portstewart recovered well to prevent the shot.

Keeley tried his luck to sign off the night in style, but he could only strike wide from all of forty yards, but on a drab night pitch and weather wise, Ballymena got the job done with minimal fuss against a battling Portstewart side, to set up a quarter-final encounter with neighbours Larne at the Showgrounds on Saturday 2nd March.