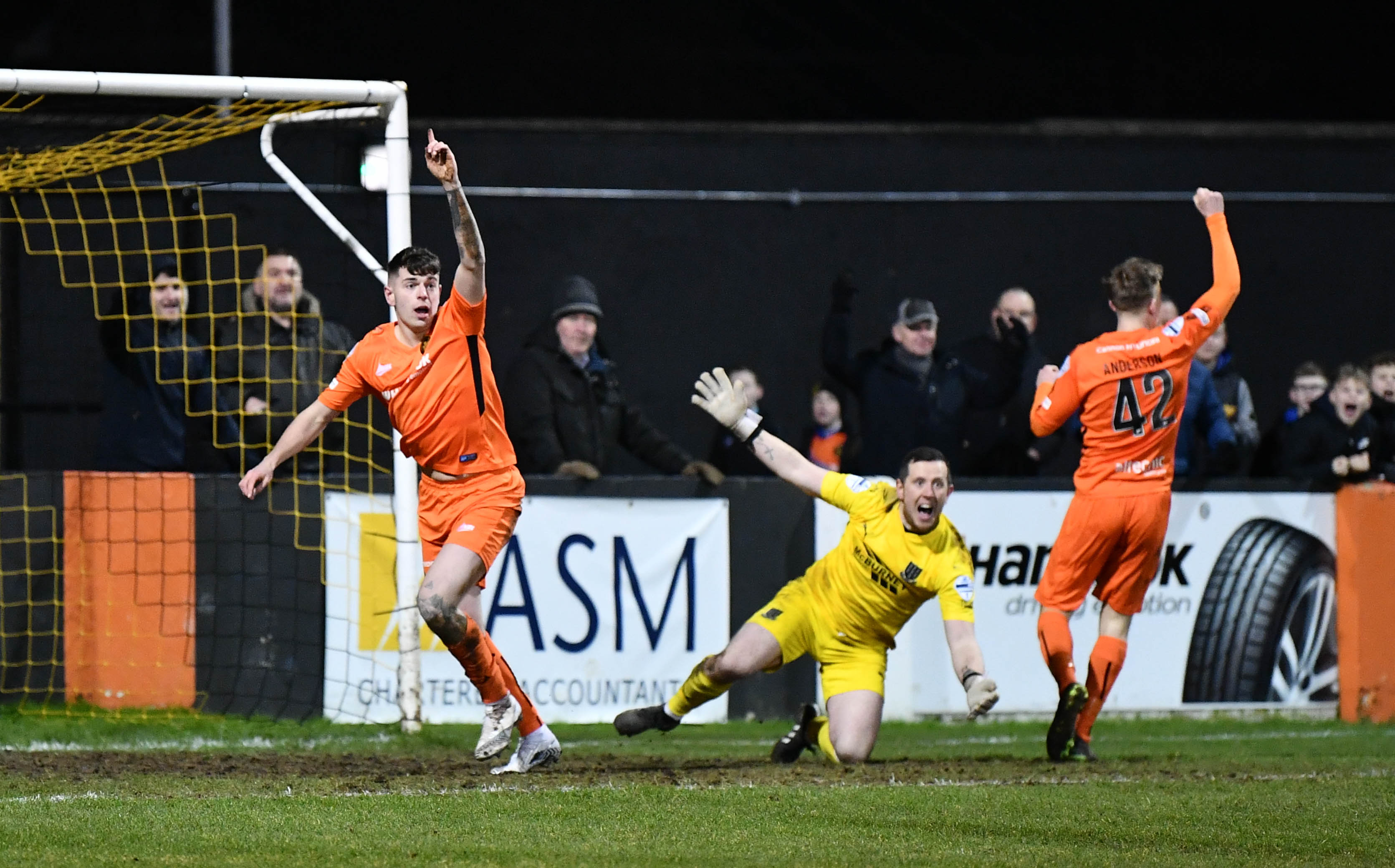 United made five changes to the side that edged past Warrenpoint at the weekend, including a debut for goalkeeper Ciaran Gallagher, after the announcement of his signing earlier in the afternoon. Michael Place and Kym Nelson also came in for their first starts.

Looking to put right back to back defeats this season to Stuart King's men, United set the tone for the night with a poor start in a low quality first half. Early on Ryan Waide saw a shot from the tightest of angles held by Matthew Skeet, but that wasn't far off as good as it got for the visitors.

Looking far the more sharper and hungrier, Carrick came onto United strong and Lloyd Anderon was prevented from a tap in by a strong Conor Keeley block. Shot-stopper Gallagher barely had time to settle in before making his debut, but on thirty minutes the 'keeper made a fantastic save to keep Jordan Gibson out from a corner.

With what was Ballymena's only spell of any pressure whatsoever in the first half they went close to leading. Place, their best player on the night, saw a free kick headed onto the top of his own crossbar by Mark Surgenor, and from the resulting corner Waide's near post flick was cleared off the line by Ben Tilney.

With the Braidmen unable to get the ball on the deck at all and being resorted to fairly route one football throughout, any goal looked likely to come at the other end, and it did as Carrick took the lead on forty one minutes. Gallagher came for a corner from the left, but after he completely missed it, David Cushley had the easy job of finishing from close range against his former club.
The visitors almost sneaked into half time level when Nelson's ball over the top dropped for Steven McCullough, but off balance he failed to really connect with the ball, as a fairly dismal first half ended 1-0.

Ballymena's second half performance couldn't really have been much worse than the first and despite Gallagher doing well to claw away an Alex Gawne shot early on, by and large United started the half better.

In a meaningful ten or so minute spell there were hints of a potential leveller, particularly from set pieces. First, Ross Redman saw a free kick powerfully headed just wide by Keeley, and shortly afterwards Nelson saw a header off a corner tipped over by Skeet. That spell would be the best of the Sky Blues in the half as another dire final half hour saw the 'Gers go out of sight.

On sixty three minutes Carrick were handed the chance to double their lead when a bouncing ball in the box flicked off the hand of Nelson, and whilst there was next to nothing Nelson could do to get his hand out of the way, referee Christopher Morrison opted for a penalty. David Cushley stepped up and despite Gallagher going the right way, Cushley tucked his penalty neatly in the bottom corner for 2-0.

Andy McGrory and Kenneth Kane were introduced to try and bring United back into it, but in truth it never really looked like happening with Ballymena so below par. It was almost three when Anderson hooked a shot goalwards and Gallagher had to save at his near post, but it would be three with a controversial goal twelve minutes from time. Kyle Cherry played a delightful first time ball through for Ewan Kelly, but after he overran the ball into Gallagher, it appeared that he collided with the 'keeper to knock the ball out of Gallagher's control before Kelly tapped in. Unbelievably, the goal was allowed to stand, causing understandable anger and disbelief from the United players.

Despite the questionable nature of the third it made little difference to the result, and it should've been 4-0 when Kelly broke clear again, and with no United players in sight he squared it for Jack Chambers who had to score, but somehow Gallagher saved wonderfully. That was the final action of an extremely poor night all over the pitch for Ballymena, with the boss himself calling it inexplicable, and it's a short turnaround now to put things right against Cliftonville on Friday night.