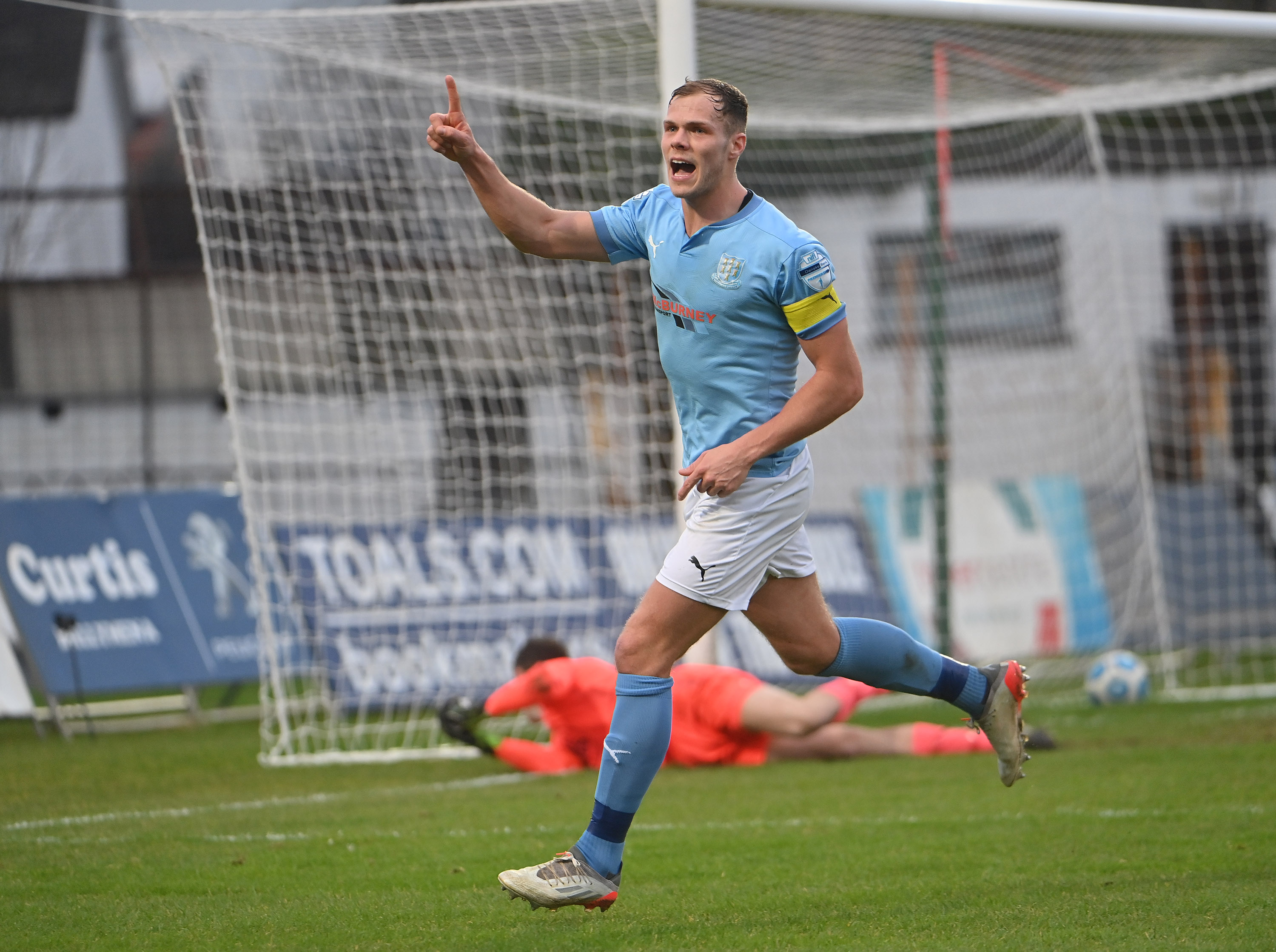 Leroy Millar's first half strike was enough to give Ballymena United a narrow 1-0 win over bottom side Warrenpoint in a tight encounter at the Showgrounds on Saturday afternoon.

United were able to welcome both Ross Redman and captain Leroy Millar back from Covid isolation, and they replaced Douglas Wilson and Ryan Waide from the side that lost to Linfield a week ago.

This one will go down as one of Ballymena's most hard fought wins of the season, as the first half produced little action and little quality. It was an even and cagey start on Warden Street with both sides unable to keep the ball on a slack pitch, and the only chance in the first twenty minutes was a flicked header by Millar that was easily saved.

With United not quite watertight when holding onto the ball a mistake from Sean Graham allowed Warrenpoint to break on the halfway line, but after Fra McCaffrey and Luke Waide Slater combined, the former fired over. Ten minutes later a spot of hesitancy from the hosts allowed Alan O'Sullivan a chance, but his shot was well blocked by Conor Keeley.

With the first half nearing its end and neither team really looking like taking a hold of the game, the Braidmen scored the games only goal out of very little. Keeley's long free kick from deep inside his own half was flicked on by David Parkhouse and it was met by Millar. The skipper's first touch allowed him to bypass his markers into the box, where he saw his strong strike from a tight angle somehow squeeze in at the near post by 'keeper Stephen McMullan, who will surely feel he could've kept it out. It marked Leroy Millar's third goal of the season, and gave United a slender lead at the break after an in and out half.

The second started with a change of officials as Tony Clarke took over refereeing duties from Keith Kennedy, and Clarke was almost signalling a second Ballymena goal just two minutes in when Paul McElroy rattled the post. The forward showed tidy footwork to gain a bit of space and from all of twenty five yards McElroy pulled the trigger, only to see his rasping effort come flying back off the Point post.

The Sky Blues would've hoped their strong start to the half would signal a bit of control on the game at last, but it wasn't really to be as a nervy second half ensued. Ballymena had the better of the chances for the remainder of the game, but Warrenpoint had plenty of their own and gave United two scares in as many minutes. First, the visitors looked set to level when O'Sullivan's low ball across the box fell for Waide Slater, but Sam Johnston was out quick to make a fine save with his legs. A minute later it was Waide Slater again causing problems, but after getting the better of United's back line, he fired wide.

David Jeffrey made a triple sub on sixty four minutes, including home debuts for Kym Nelson and Michael Place, but by this point United were under the cosh, as the subs allowed a moment to breath.

On seventy four minutes Ballymena thought they'd put Warrenpoint to bed when a Place corner wasn't dealt with and Millar slammed in from close range, but the goal was ruled out, presumably for an adjudged foul on the 'keeper McMullan.
Shortly afterwards it probably should've been 2-0 when sub Ryan Waide latched onto a through ball and rounded McMullan, but he took the ball a little too wide, before seeing his shot blocked on the line by Jonathan Leddy, who got back well.

Despite underwhelming for much of the day, the final few minutes saw a flurry of Sky Blues chances, but all came and went. After Waide's chance a melee in the Point box saw Nelson and Steven McCullough have shots blocked, before Waide dragged one wide to end the surge and see Ballymena somehow kept out.

There was still for Millar to be denied by the post after fantastic link up play from McElroy and Place, but it was an anxious final three minutes of added time for the home fans and right at the end Ray O'Sullivan had a huge chance to level but fired over, as Ballymena clung on for all three points.

A win to meet the very definition of winning ugly for Ballymena against the leagues bottom team, but a win nonetheless as United make it six wins on the spin at home, to start a big week off well.