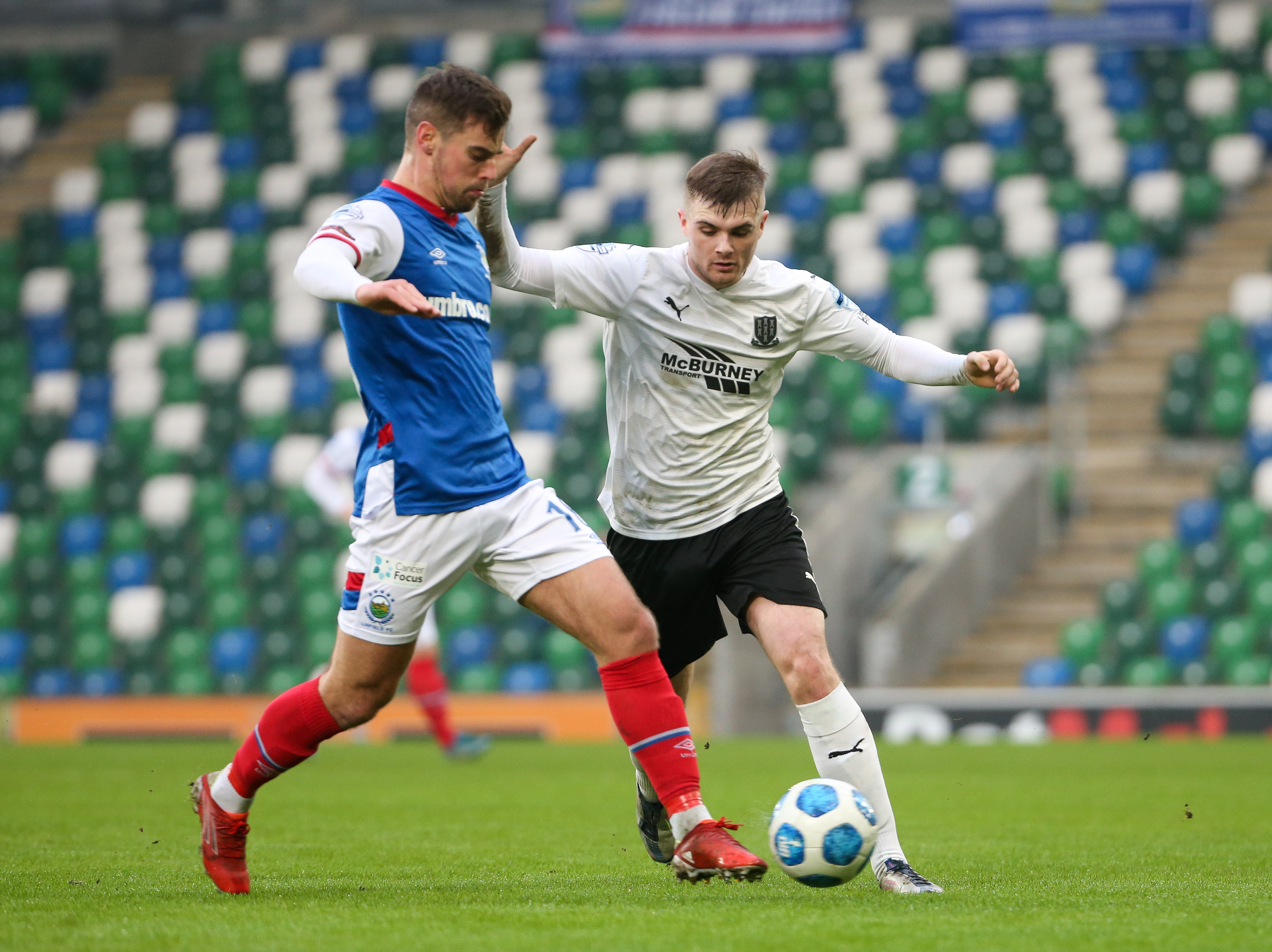 It was a familiar story for Ballymena United at The National Stadium at Windsor Park as they fell to a narrow 1-0 defeat to champions Linfield on Saturday afternoon.

United made four changes from last time out for the trip to the capital, including Ross Redman and skipper Leroy Millar dropping out due to positive Covid tests.

When the two sides met at the same venue three and a half weeks ago Ballymena took the game to the league leaders, but this time round the first half was a slog for the visitors as Linfield dominated. Conor Keeley donned the captains armband for the Sky Blues and looked their most attacking threat in the half, especially when a dazzling run through midfield almost ended in a United chance.

However, bar that run it was all Linfield and on fifteen minutes they took the lead through Christy Manzinga. The striker's driving run got Linfield into the box, but after Ballymena failed to clear their lines Niall Quinn picked it up and teed up Manzinga inside the D, and his first time effort hurtled past Samuel Johnston off the post and in.

Manzinga was causing all sorts of problems for Ballymena and when he questionably evaded the offside flag he burst clear, but as he tried to round Johnston and tap home, Johnston did superbly to take it off Manzinga's feet. Less than a minute later Christopher Rodgers was booked for a challenge that gave the Blues a free kick on the edge of the box, but Johnston did well again to bat away Martin Donnelly's effort.

After seeing very little of the ball in the opening half hour, United were able to keep the hosts at bay for a brief spell in which Keeley headed a corner wide, but soon after Manzinga was through on goal again, but after trying to size up Sean Graham, United's last man had the last laugh on this occasion with an inch perfect interception.

Five minutes from a half time whistle the Braidmen were no doubt looking to hear, Manzinga was at it again as he toyed with United's defence before curling a shot wide. Ballymena's first half display had been poor, and the day didn't improve when Douglas Wilson was forced off through injury, although it did allow Kym Nelson to make his United debut, after signing from Ards on Thursday.

The second period did little more than simmer until the final fifteen or so minutes, with Ballymena able to get more of a foothold in the match to reduce Linfield's chances, but without creating much themselves. Unsurprisingly, the half's first chance fell Manzinga's way after more tidy footwork, but this time he blasted an effort well over.

Around the hour mark the away side had their first real spell of meaningful pressure, and a corner saw shots from both Nelson and David Parkhouse blocked by men in blue. With Ballymena able to keep themselves in the game, Michael Place came on for his debut when he replaced Rodgers on seventy-five minutes, as David Jeffrey shuffled the pack to find a leveller.

With United sharper in the second half to close down Linfield's chances quicker, it took until seventy-eight minutes for the Blues to go close, but after Jamie Mulgrew shot straight at Johnston, sub and new boy Chris McKee really should've done better as he sent a free header over the crossbar.

Ballymena tried to step it up and find that equaliser in the dying embers and with that came a triple sub, as Jack Henderson, Daniel Bramall and Kenneth Kane were all thrown on. And it was in three minutes of added time that Ballymena's large and vocal travelling support couldn't believe they hadn't levelled after a golden chance. A lovely slid through ball found Andrew McGrory who crossed from the by-line into a sea of bodies in the box, and from close range captain Keeley, a rock all day once again, somehow saw his effort cleared off the line from point blank range by Quinn to see Linfield take maximum points.

For United, a poor first half was met by improvement in the second, but despite Linfield deserving the three points, it's another extremely narrow defeat for Ballymena at The National Stadium.