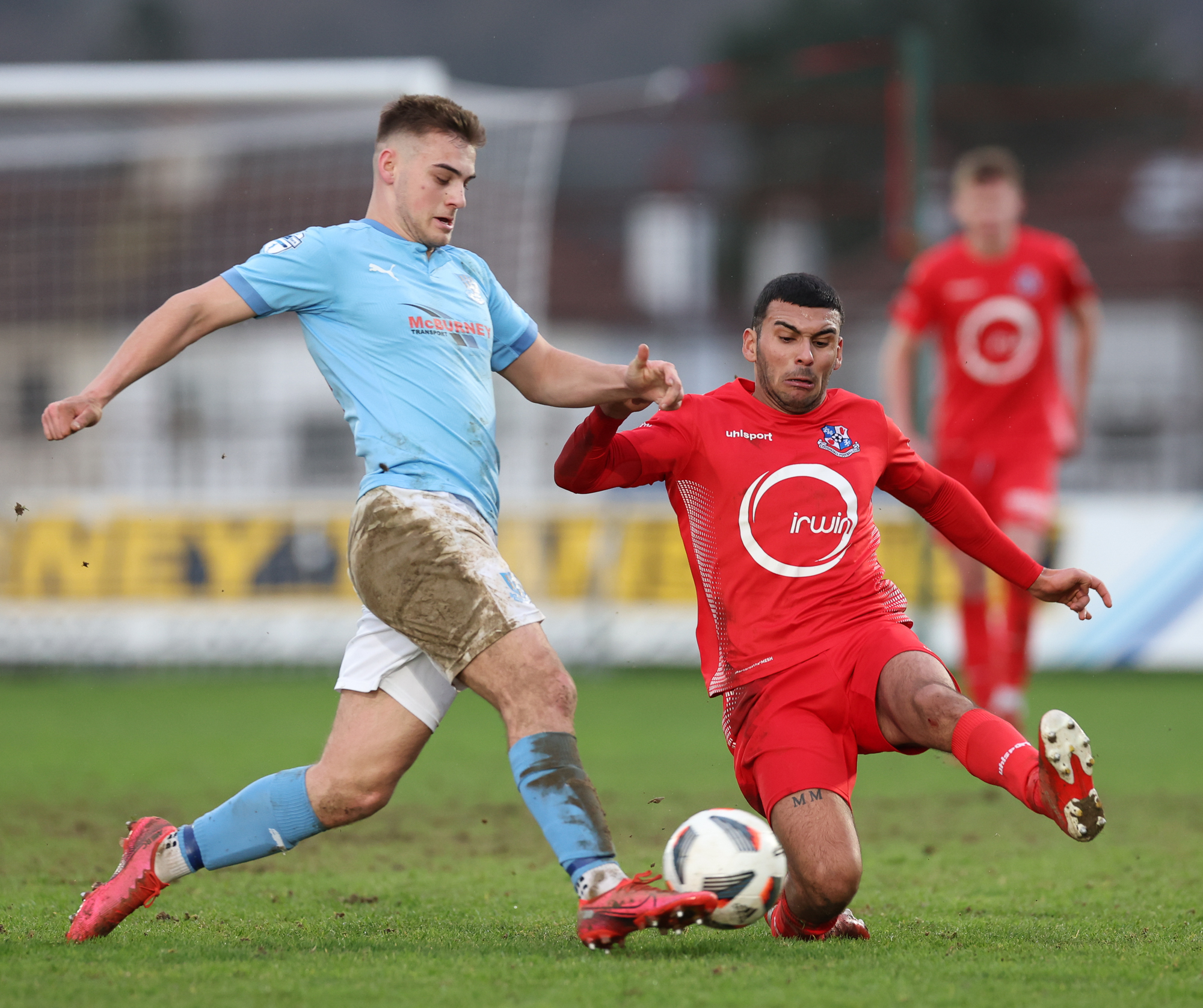 Ballymena United booked their spot in the second Round of the Samuel Gelston's Whiskey Irish Cup with a 2-0 win over tricky customers Loughgall at the Showgrounds on Saturday afternoon.

United were able to name an unchanged starting XI from last weeks win over Portadown, but the bench was back to full capacity as a number of players returned from injury, suspension and Covid.

First round ties in the Irish Cup against lower league opposition are usually scrappy affairs and this was no different against a Loughgall side impressing in the Championship this season.

The Sky Blues started well on a pitch suffering from this weeks snow, ice and rain, and early doors Andrew McGrory fired an awkward volley wide, before Conor Keeley headed over from a corner. After those chances it all good very cagey on Warden Street, with United dominating the ball but to little effect, while the Villagers offered nothing of note to worry Sam Johnston.

On twenty-five minutes the home side had a good chance to go in front when the ball dropped for Jude Winchester in the box, but his shot cleared the crossbar by some distance. However, a minute later Ballymena moved ahead. United won a corner after David Parkhouse's cross was deflected wide, and Ross Redman's ball in was poked home by Christopher Rodgers in the heart of the box to give him a deserved goal after recent performances, and put Ballymena in the ascendency.

That was as good as the first half got with neither team showing enough to threaten a second goal in the half. Loughgall had their first effort on target towards the end of the half, but it was the easiest of saves for Johnston to keep out Pablo Andrade, as the hosts took a slender lead to the break.

Ballymena started the second half brightly as they looked to put further distance between themselves and their County Armagh opponents, and nine minutes into the half it was 2-0 thanks to a McGrory beauty. Predictably, Redman was involved again as he whipped in a free kick from near enough the corner flag, but it was cleared out as far as Andrew McGrory who smashed home an unstoppable first time shot from outside the box that had Loughgall 'keeper Berratt Tucker watching in admiration.

It would've been easy to think that it was game over after McGrory's second, given how little Loughgall could conjure up top, but to the visitors credit they stuck around well and easily could've had one back soon after. Nedas Maciulaitis did well to keep a chance alive and after getting past Rodgers in the box he probably should've scored with just Johnston to beat, but he could only fire over.

Ryan Waide got half an hour following his return from Covid as he replaced Kenneth Kane, and shortly afterwards a strong tackle from Conor Kerr on Redman saw a reaction from the defender, and a coming together saw both players yellow carded. United had the ball in the net again with twenty minutes left when it was bundled home in a sea of bodies, but a foul on Tucker led to a Loughgall free kick instead.

Brendan Barr impressed in a twenty minute cameo as he replaced Winchester, but Loughgall did well to make it an uncomfortable ending for Ballymena as the visitors fought for a goal to keep the tie alive. Penalty appeals were waved away for the Championship side when sub Nathaniel Ferris went down in a rather exuberant way in the box, with the nature of his fall prompting a heated discussion between the two managers on the touchline.

Tiernan Kelly then fired a free kick from a good position straight at Johnston, who had done well to hold a number of crosses in the half, and that would be prove to be the final chance of the game as United progressed.

Far from pretty for the most part from the Sky Blues, but the result was all that mattered against a dogged Loughgall as a professional showing from the hosts sees them into round two, where a home date with Intermediate side Portstewart awaits.