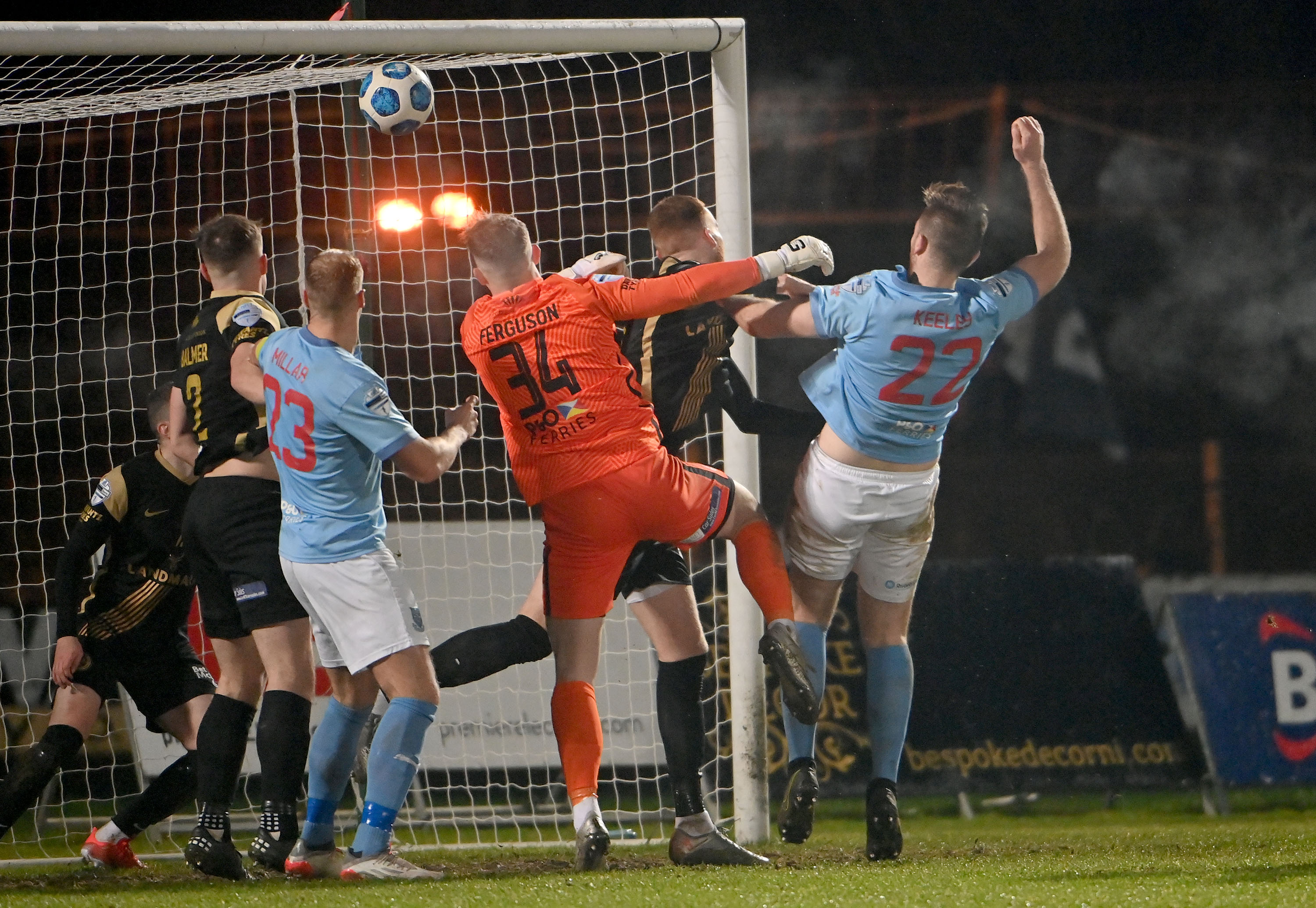 Paul McElroy's brilliant winner helped Ballymena United come from behind to beat rivals Larne 2-1 in the Shanes Hill Derby at The Showgrounds on Friday night.

United made just the one change under the lights on Warden Street as Ross Redman replaced Douglas Wilson, who dropped out through injury.

With the live BBC cameras watching on, the first half probably won't be kept in the archives after a quiet opening half to say the least. It took twenty-fives minutes for either team to have any sort of attempt on goal, with a very even and cagey game until then. That first effort came from Graham Kelly, but his tame shot was easy for Jordan Williamson to hold.

As the half hour mark approached, a ten minute long fireworks display in the town began to grab the attention of the supporters rather than the match, but on the pitch there were signs of some sparks as United tested Rohan Ferguson. Ballymena broke well from their own half and Jude Winchester eventually fed Steven McCullough who had charged forward, but his strong effort was well saved by Ferguson.

With both teams still evenly matched, chances were exchanged at either end towards the end of the opening period. Williamson made another top stop to keep out David McDaid, with McCullough sweeping up the remaining danger, while at the other end the hosts went agonisingly close to leading.

Another counter from the Braidmen gained momentum with Albert Watson and Mark Randall getting tangled up with each other on the halfway line, allowing Paul McElroy to stretch his legs into space. He hung a cross up for Ryan Waide to meet, but his header flew inches over as the sides went into the break deservedly at 0-0.

If the first half had been uneventful, but still decent from the home side, the second half saw an outstanding Ballymena largely dominate their full time rivals. That said, the half got off to the worst possible start for Ballymena as Larne took the lead on fifty-one minutes. Any attacking threat from the Inver Men was down the right and Tomas Cosgrove's driven cross found McDaid arriving into the box right on cue to fire home past a stranded Williamson.

After two comfortable defeats to Larne already this season, Ballymena could easily have folded, but just seven minutes after falling behind they levelled. Winchester, as quality as ever, tried his luck from a long way out and his shot was fumbled over by Ferguson. Redman put the resulting corner right into the middle of the six yard, where the yet again colossus that is Conor Keeley, beat Ferguson to it to head home and get the home end rejuvenated.

Following the two quick goals to bring the game to life, Ballymena were fantastic from front to back as they took the game to Larne. The midfield trio of Winchester, Leroy Millar and Brendan Barr were simply brilliant, but chances were still at a premium, until fifteen minutes from time when United completely the turnaround.

Despite some tidy play, this one came from route one, as Williamson's long punt out of his hands found Kenny Kane, who beat Fuad Sule in the air to set Paul McElroy free. The forward could've hit it straight away as he made it into the box, but he instead took a touch to get it back on his left foot, and produced a moment of pure magic to bend the ball in off the far post to bring the Sky Blue army to its feet again.

It could've been three just two minutes later as Keeley headed a corner over, before David Parkhouse made his long awaited home debut following a lengthy injury layoff, as he replaced the hero on the night McElroy.

Larne were doing very little to threaten United, down largely to the Ballymena back four barely putting a foot wrong, and with five minutes left the away side were fortunate not to be down to ten men, when the already booked Sule caught Millar with a high boot, but Tony Clarke opted only for a word in Sule's ear.

Parkhouse had joined the rest of the front three in putting in a more than admirable display up front, and as four minutes of added time approached, he almost secured the three points when he met McCullough's cross, only to see his header crash off the crossbar.

The four minutes of added time were saw out with a fair amount of ease, as United picked up a more than deserved first win this season over Larne, to make it three wins in four ahead of Tuesday nights BetMcLean League Cup semi-final at Solitude.