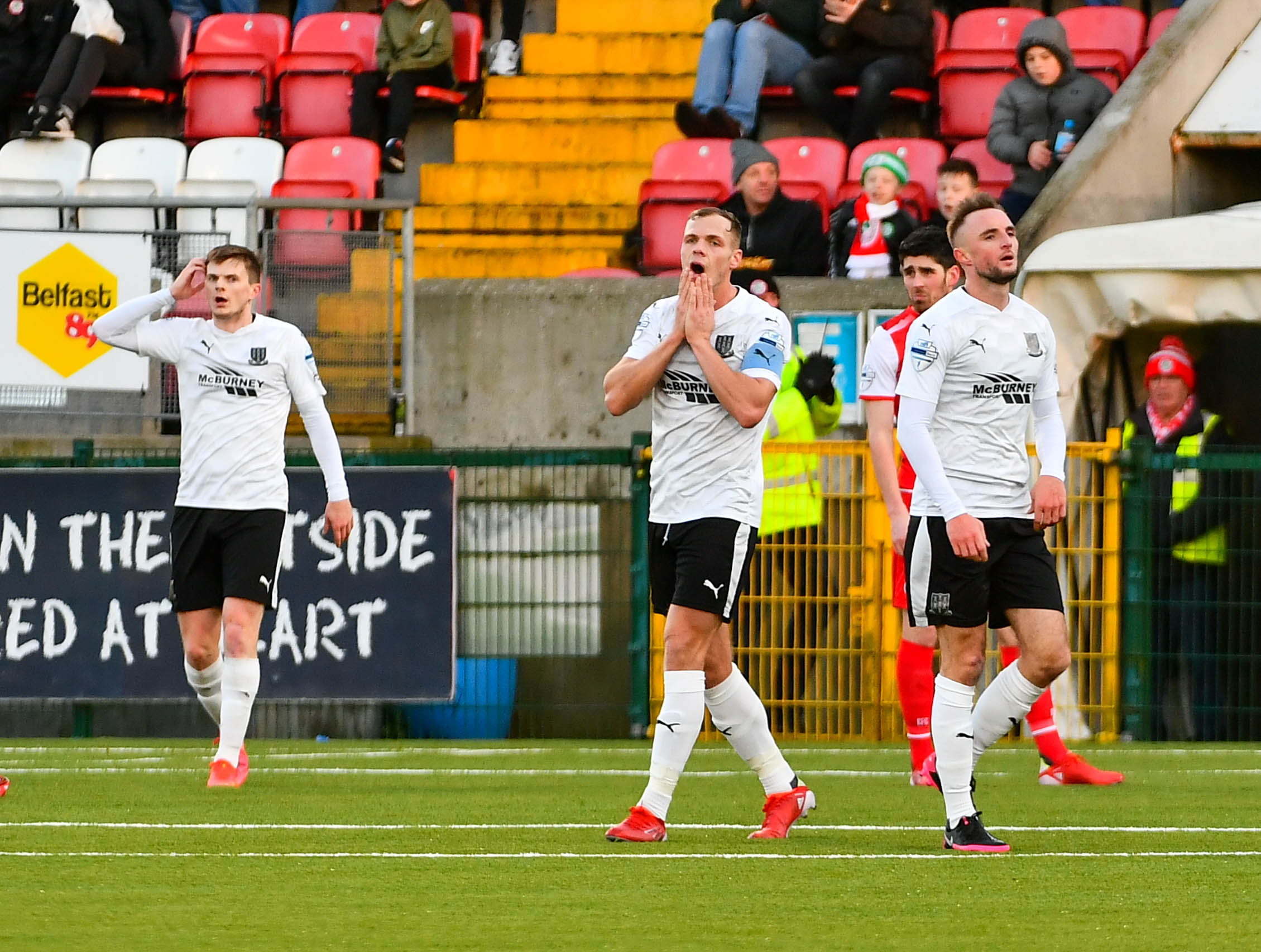 Ballymena United suffered a 1-0 defeat to Cliftonville as Ryan Curran's second half strike was enough for the league leaders at Solitude on Saturday afternoon.

Coming off the back of two wins in the last week, United made just the one change as Andrew McGrory was replaced by Lee Chapman, while Sean Graham made the bench on his Ballymena return.

The opening half an hour in North Belfast saw Ballymena play some of their best football this season as they completely dominated their table topping opponents early on. The first chance came on nine minutes when Conor Keeley's long ball made its way through to Jude Winchester, but he struck a difficult half volley well wide. As United knocked the ball about with some real style, they were somehow kept out when three huge chances inside five minutes came and went. First, Chapman's deep cross was headed back across goal by Ryan Waide to Kenneth Kane who was in the six yard box, but he was denied superbly by Reds' 'keeper Luke McNicholas.

Not many minutes later United were incredibly kept at bay again as Paul McElroy picked out Waide, but he saw his shot cleared off the line by Levi Ives. The follow up fell to Leroy Millar, but he was the next to be denied by McNicholas as he got down well to tip the skipper's effort round the post. After seeing little of the ball for so long, Cliftonville finally worked their way into the game as the half entered the final fifteen minutes. Daniel Kearns delivered an inviting low ball across goal that was begging to be finished off, but Douglas Wilson did brilliantly to cut it out.

Ives struck an effort from outside the box well wide before with the final action of the half Jonny Addis crossed for Kearns, whose header was easily saved by Jordan Williamson, as United were left rueing the early missed chances to go in at the break level.

The second half saw the roles reversed from the first forty-five as the hosts dominated a Ballymena side who were creating very little. The Reds went close on fifty-two minutes as Williamson could only partially clear a corner to Kearns on the edge of the box, and his rasping shot went over off the top of the crossbar. The Braidmen's impressive first half passing was matched by some wayward play in the second that allowed Cliftonville to continue to come at the Sky Blues, and despite Cliftonville not testing Williamson too often, it felt like a goal was coming.

That goal would come in the sixty-eighth as the home pressure eventually broke Ballymena's back line. Chris Curran delivered a free kick from the left and it eventually landed at the feet of Ryan Curran and from close range he was able to squeeze the ball past Williamson who couldn't get a strong enough hand on the ball to keep it out.

Ballymena had been readying a substitute prior to the goal to try and keep it tight at the back, and they pressed on with it as Ross Redman replaced Waide, allowing Steven McCullough to push up the pitch.

Paul O'Neill almost made sure of the points for Cliftonville when he thundered a long range strike off the upright, but in the final five minutes, with Jonte Smith thrown on, Ballymena finally gave the Reds something to think about in the second half with some late pressure.

The away side had a series of corners and crosses that were cleared, however one corner narrowly missed the head of Williamson who was up for the set piece.
With the final play of the match Ballymena felt they had a strong claim for a penalty when Luke Turner looked to impede Wilson in the box, but nothing was given as an impressive at times United narrowly lost out ahead of the League Cup semi-final between the two sides at Solitude again on Tuesday week.