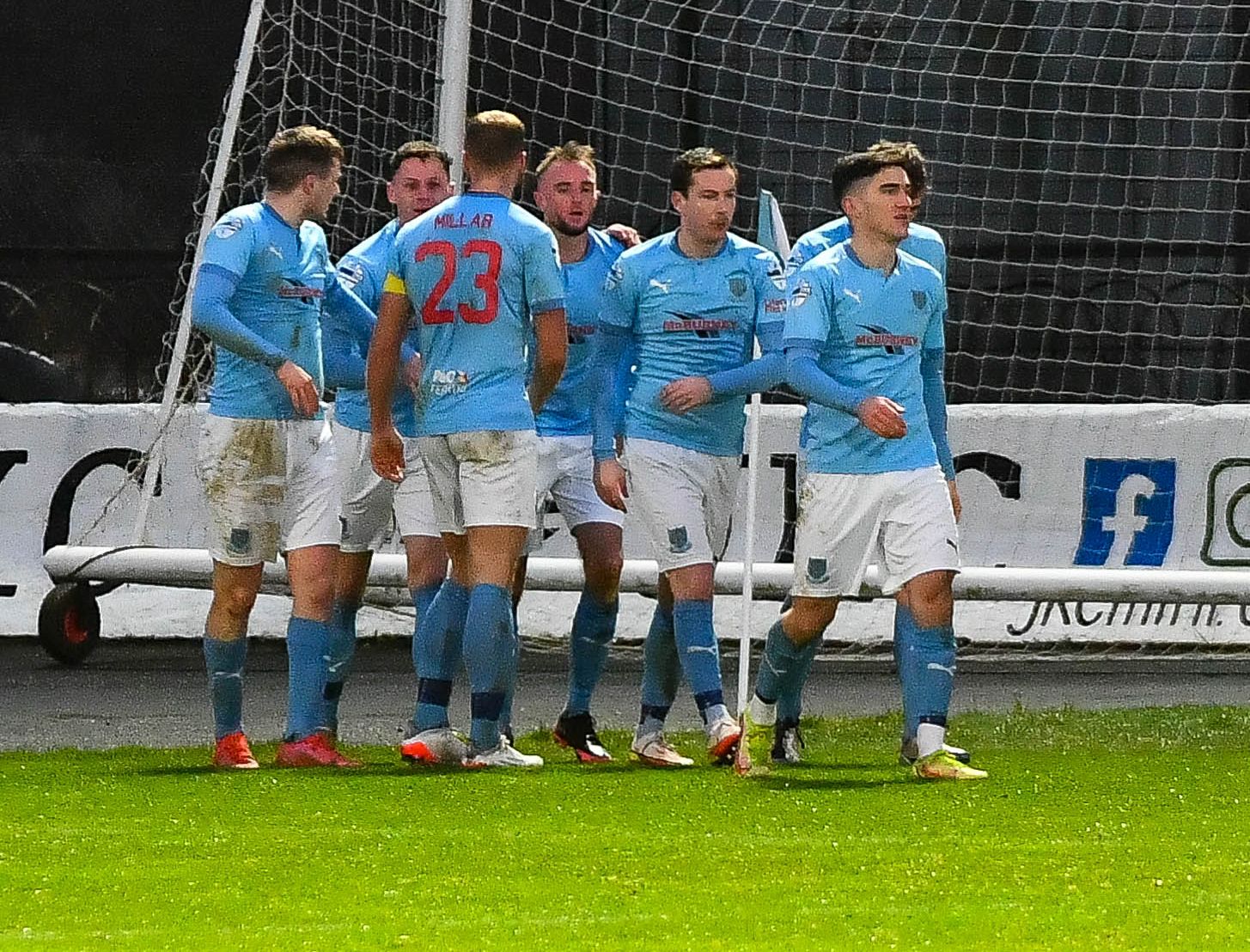 Ballymena United got back to winning ways in style with a thoroughly deserved 2-0 victory over Crusaders at The Showgrounds on Saturday afternoon.

On a bitterly cold afternoon on Warden Street, Ballymena were able to welcome both Jude Winchester and Conor Keeley back to the starting line up after injury, as they replaced the suspended Ross Redman and Caolan Loughran. Christopher Rodgers also returned to the bench following a lengthy lay off.

From minute one it looked like a totally different United team to the one that failed to impress in a defeat to Carrick a week ago, and after just five minutes the hosts had rattled the woodwork. Keeley switched play well to pick out Leroy Millar, who found Paul McElroy on the edge of the box, but his sweetly struck shot was tipped onto the crossbar by Jonny Tuffey, before Kenneth Kane turned the rebound over.

Ballymena continued on the ascendancy with some really neat passages of play, as McElroy found Kane who saw his goal ward shot blocked by Daniel Larmour, before a Winchester cross was spilled by Tuffey, with nobody in Sky Blue there to turn it home.

The Crues had barely troubled the Braidmen, and the closest they'd came in the first half hour was an awkward volley from Johnny McMurray that was blocked by Keeley. Yet more good play from the home side yielded more chances towards the latter stages of the half, the best of which saw Ryan Waide, a torment for Crusaders all day, cross for McElroy, but he saw it late and headed over.

The North Belfast side had their best spell of the half late on and despite United being by far the better side, they almost fell behind when great work from Larmour allowed him to cross from the byline, but in a mad goalmouth scramble United somehow kept Crusaders at bay, thanks in part to an Andy McGrory goal line clearance in amongst the mayhem.

Further attempts came from Ben Kennedy and Larmour, with the former held at the second attempt by Jordan Williamson, and the latter blocked by the skipper Millar, as a good first half ended scoreless.

Stephen Baxter made two changes at the break to try and shake Crusaders into life, and one of them, Ross Clarke, gave United something to think about from the off. The full back cut in and saw a deflected shot trickle inches past the far post, with the resulting corner flicked on at the near post, but go wide as Jordan Forsythe couldn't get a nick on it at the far post.

Ballymena continued to knock the ball about well, without the chances of the first half, but on fifty-seven minutes they survived another huge scare. A Forsythe strike landed kindly for Kennedy who showed great composure to give himself what looked like an easy finish, but somehow Williamson pulled off a heroic save from close range. The ball fell back to Kennedy but yet again he was denied by three United bodies on the line, before Keeley cleared the danger.

Less than a minute on from keeping the ball out against all odds, Ballymena went straight down the other end and took the lead through the midfield maestro Winchester. United broke down the left and eventually McElroy crossed from the byline and picked out Jude Winchester, who guided a lovely side foot volley past Tuffey to put Ballymena deservedly ahead.

Following the goal Ballymena give up a bit of their possession as Crusaders started to search for a leveller with the most sustained pressure they'd shown so far. Kennedy crossed for Philip Lowry but his tame header was kept out by Williamson, but bar that the majority of the away team's probing was cut out by Keeley and Douglas Wilson, who were absolutely immense at the back.

With thirteen minutes left Ballymena were dealt a blow when Millar, who was simply superb all day, went down with a nasty looking knee injury, and he was forced off, replaced by Jack Henderson.

Late on, with United continuing to hold firm at the back, they wasted two great opportunities to wrap up the three points. First, a three on one counter presented a good chance for Winchester, but his heavy first touch took the chance away. Two minutes later Ballymena broke again, but Kane curled a shot well wide.
As the game entered five minutes of added time, David Jeffrey delivered an animated rally cry to the home stand, and they responded by lifting the noise and getting the song book out.

Those noise levels were lifted further in added time as Ballymena secured a massive win with a second. From another counter attack Winchester lobbed the ball over for Waide who showed blistering pace to race clear. Waide had Paul McElroy in support, and he squared it for the number nine who slotted home against his former club to give him a goal his performance deserved.

Crusaders looked to pull one back late on with the game gone, but Williamson did Williamson things, unbelievably denying Lowry inside the six yard box, before saving a long Forsythe shot, as a mightily impressive United side, to a man, recorded a second win over the Crues this season.