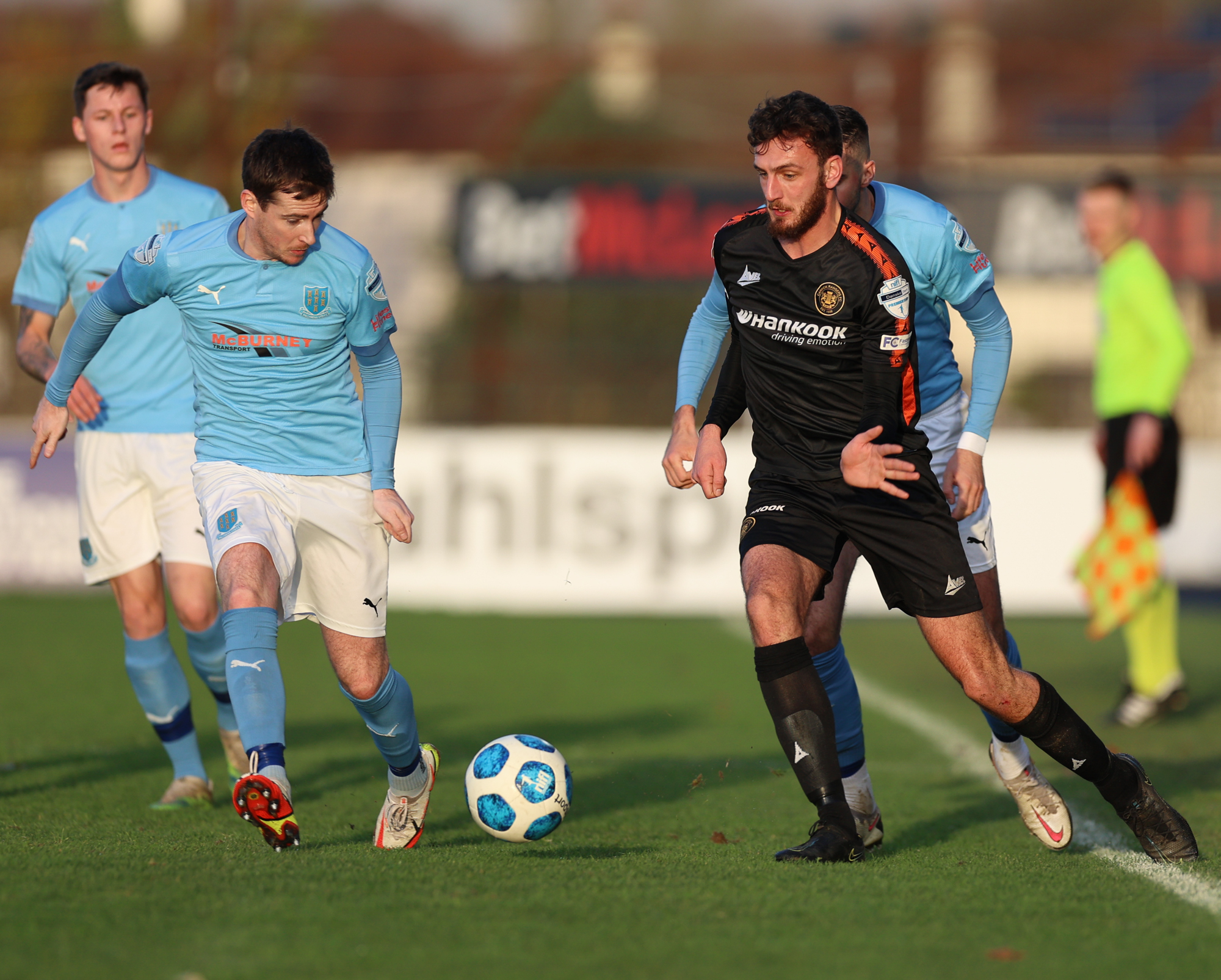 10-man Ballymena United put in a largely disappointing display as they suffered a 1-0 defeat to Carrick Rangers at the Showgrounds on Saturday afternoon.

United were forced into two changes from defeat last time out at Glentoran, as injuries to Jude Winchester and Conor Keeley saw them replaced by Ryan Waide and Brendan Barr.

On a cold day at The Showgrounds, the action on the pitch will have done little to warm those in attendance with the first half, in all truth, a tough watch between the two lowest scoring first half teams in the league. Carrick, without a win since beating Ballymena at the seaside in early October, started the better, but early chances were non-existent.

Neither team could put enough passes together to build up much momentum early on, and the first chance saw Caolan Loughran head wide from a great position, only for the offside flag to go up anyway.

Carrick's brighter spells finally yielded a first effort on goal around twenty-five minutes in when Jordan Gibson met a cross, but his header was fairly easy pickings for Jordan Williamson.

A massive opportunity passed Ballymena by around the half hour mark and it again came from a set piece. A free kick found Ryan Waide in acres of space at the back post, but from close range he was kept out on the line.

Gibson was causing United some problems on the rare occasion when either team could venture into the other sides box, and after he'd turned a shot wide, he then showed great technique to catch a half volley well, but send it just over the crossbar. As the first forty-five minutes began to die out, with most surely wanting to erase it from their minds before the second half, Ross Redman was booked before David Cushley rather summed up the half as he tried a shot from what was surely forty yards, but Williamson easily caught to end the half.

The second half had to be an improvement on the first, and the first ten minutes yielded the Sky Blues' best spell of the game by a considerable distance. Within two minutes Kenny Kane saw a cross/shot spilled by Aaron Hogg that almost allowed Paul McElroy to pounce, but the goalkeeper recovered in the nick of time to gather the ball. Shortly afterwards Kane, one of the brighter players on the day, was involved again as he crossed for Andy McGrory, but on his 100th appearance for the club he headed over.

On the stroke of the hour mark the hosts thought they'd taken the lead through Leroy Millar. McElroy flicked a McGrory cross goalwards and it was finished off by the skipper from close range, but the flag was soon up for offside. That was as good as it got for United as a lacklustre final half hour ensued, much like the first half showing. The quest for three points was made even harder on sixty-two minutes when Ballymena found themselves reduced to ten men. Redman, already on his first half booking, went in late on the edge of his own box and after some thinking time, referee Declan Hassan brandished a second yellow. The resulting free kick was taken by Kyle Cherry, but his low free kick went by the wall, but into the arms of Williamson.

Buoyed on by the man advantage, and finding space in the middle as United edged Dougie Wilson back into the defence, Carrick began to probe and after Gibson saw a strong shot well held by Williamson, the Gers took the lead in controversial circumstances.

As Carrick built up an attack, Cherry slid the ball through for Gibson from just inside the United half. United expected a flag for offside, but it didn't come and Jordan Gibson broke clear and after a lengthy run he lifted the ball over Williamson to score, sparking huge protests amongst Ballymena's players and bench.

With Ballymena adamant Gibson had been well offside, Loughran found himself in the book for his disagreement with the decision. A man down, a goal down, and struggling to create anything, United had a mountain to climb and couldn't scale it. A long ball up found Waide to give the forward a chance, but from a tight angle he dragged his shot wide.

With five minutes left on the clock Carrick really should've made it two when Alex Gawne broke clear, but a heavy final touch allowed Williamson time to come out and gather, before Gawne was then booked for a poor challenge on the 'keeper.

David Jeffrey finally turned to his subs bench as the board for three minutes of added time went up, as Jonte Smith replaced Brendan Barr, but despite Kane being denied late on by Hogg, it was too little to late as a flat and hugely disappointing United fell to a second defeat to Carrick this season.