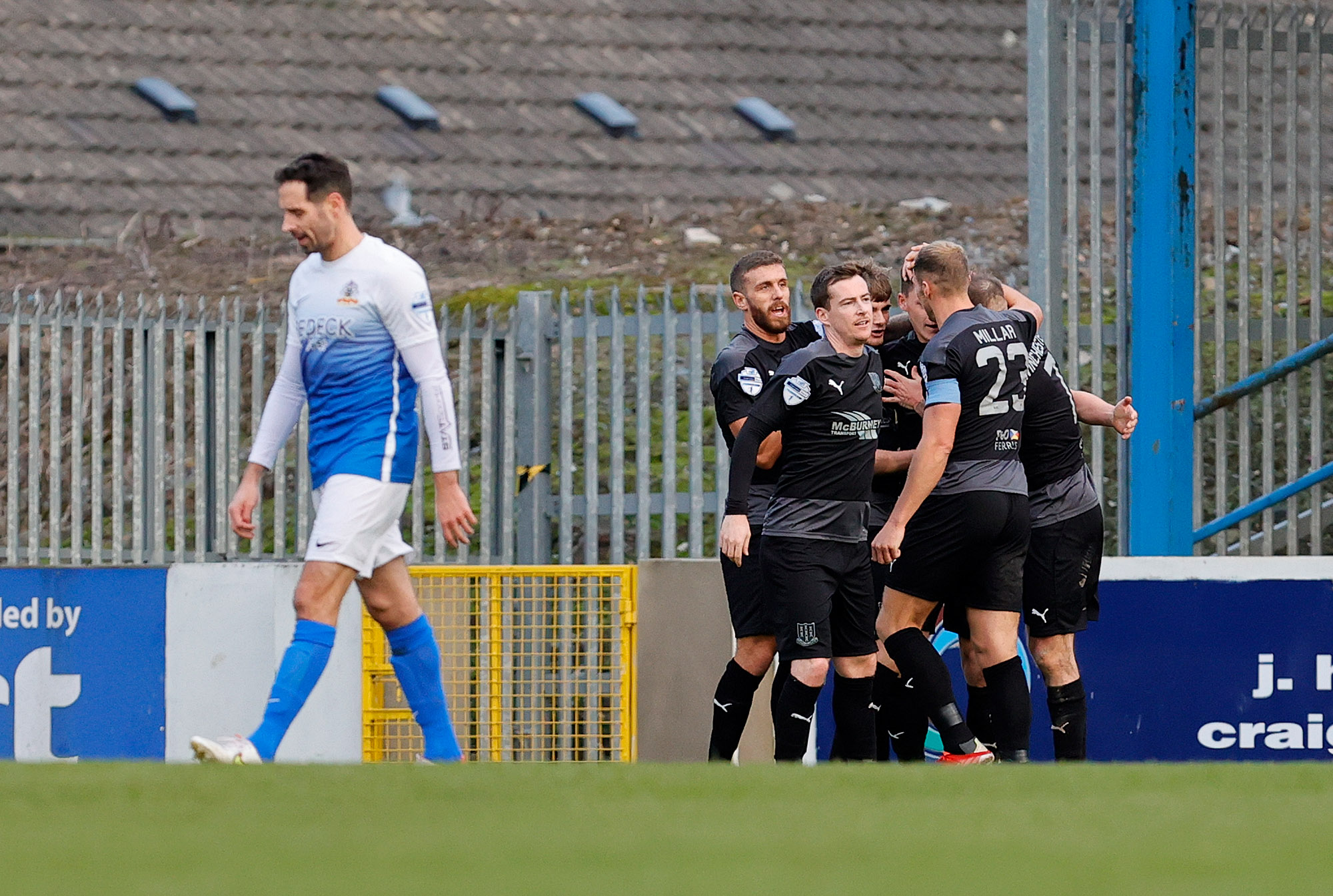 Ballymena United left Lurgan with a rare three points as Kenny Kane's first half strike helped them to a 1-0 win over Glenavon on Saturday afternoon.

United went with the same starting eleven for the third straight league game at a blustery Mourneview Park, but were able to welcome Jonte Smith and Dan Bramall back to the matchday squad after injuries.

As they arrived at a venue were points have come at a premium, Ballymena started well with the wind in their backs. On eight minutes United came agonisingly close to deserved lead when Ross Redman's corner was met by Conor Keeley, but his header came back off the Glenavon crossbar. It was the first of a flurry of corners for the visitors, and a minute later Caolan Loughran headed wide from another set piece.

Ballymena continued to control the first half without a mass of chances, but on twenty-nine minutes they felt Glenavon could've been down to ten men when Dougie Wilson was caught in an off the ball incident, but interestingly a free kick was given, but no cards of any variety handed out.

Glenavon finally had their first effort on goal just after the half hour mark, but it was skewed well over by Kyle Beggs, but moments beforehand Ballymena could've been ahead. Jude Winchester's clipped ball in from the byline was met by Kenny Kane, who saw his shot cleared off the line at the back post, and as the clearance found Leroy Millar, his header was kept out by James Taylor in the Lurgan Blues goal.

With eleven minutes left in the first half the Braidmen deservedly broke the deadlock as Kenny Kane made it two goals in three games with another fine strike. Ryan Waide typically chased down what looked to be a lost cause, and his high and hopeful hooked ball into the box was taken down wonderfully well by Kane, who then held off Mark Stafford before firing home neatly into the far corner, to give a far hungrier and potent United team a lead at the break.

After Glenavon had barely laid a glove on their visitors in the first half, Ballymena would've expected a tougher second half, but it never really came to pass, despite United battling the howling and ever strengthening wind for the second period.

Peter Campbell looked like Glenavon's biggest threat and after he cut in from the left he was able to get a shot away, but it flew well over Jordan Williamson's goal. Glenavon had gained some control in the opening ten minutes of the half, but could find no way to create chances against Ballymena's faultless back three, who were aided by strong performances down either flank from Andy McGrory and Steven McCullough.

As the half progressed Ballymena came again as they looked far the more likely to find a second goal. Kane almost clambered home a second following a scramble from a corner, before Millar fired over after more tireless work from Waide.

As Glenavon's frustration began to grow, Williamson, who was surely feeling the cold in Lurgan as he had little to do, was on the end of a robust and fairly needless challenge from Beggs as the 'keeper ushered the ball out for a goal kick, but after lengthy treatment he was fine to carry on, whilst again strangely no card was shown.

The wind was no doubt making it difficult for both teams and it led to chances being a rarity towards the final quarter of the game. A whipped ball in from Kane was completely missed by Danny Wallace which almost allowed Waide in, but he was just too far away from the defender to get a touch on the ball to help it goalwards.

The final five or so minutes were all Glenavon as their assault on Ballymena's goal finally came, but with the majority of the crosses dealt with well by Williamson or the back line, their were no real heart in mouth moments for David Jeffrey's men. The closest Gary Hamilton's side came saw Calum Birney head over from a corner, but United saw it out, as Kane was again the match winner to see the Sky Blues leapfrog Glenavon in the table with a valuable and richly deserved clean sheet and three points.