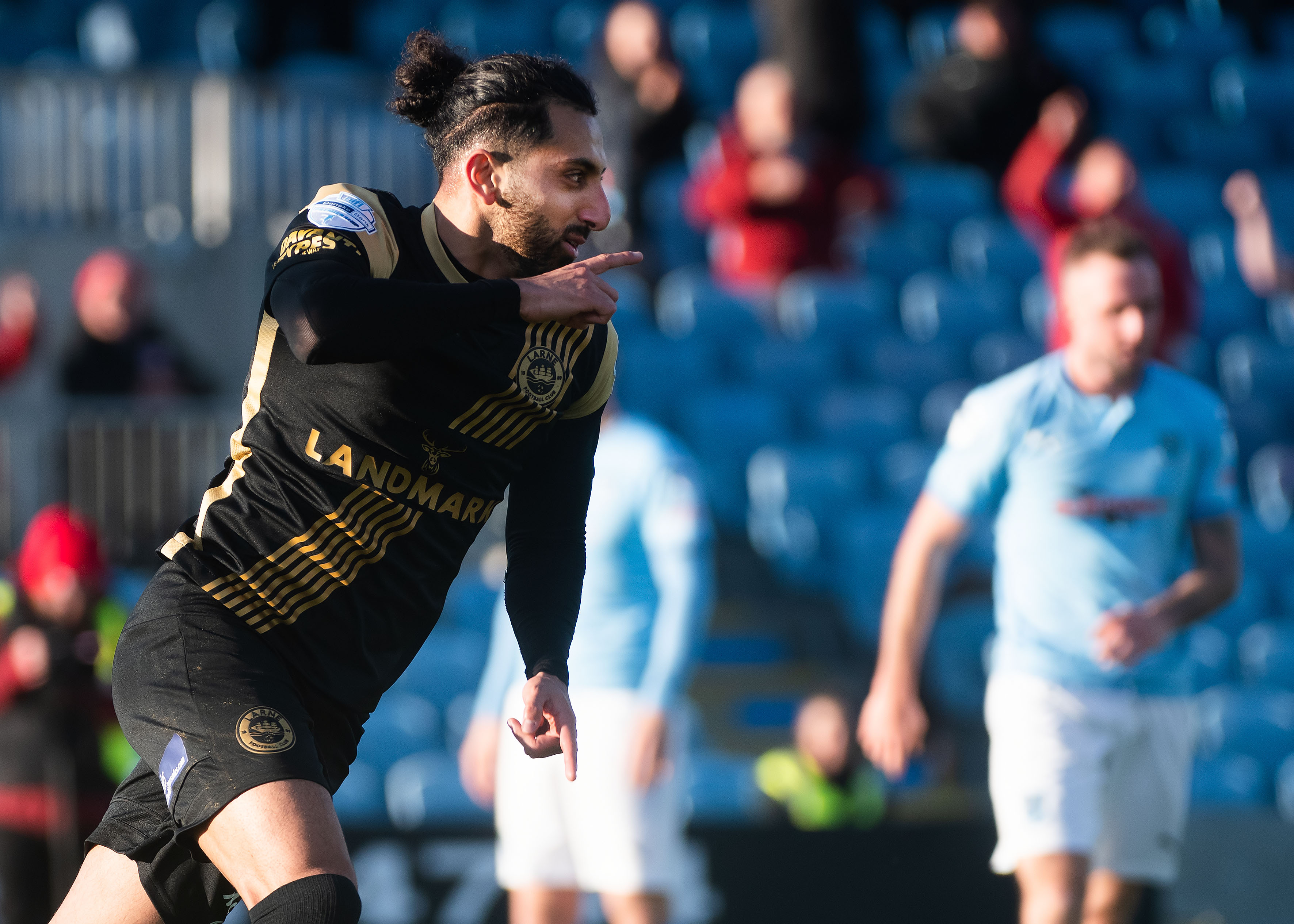 Ballymena United were well beaten for the second time this season by rivals Larne, as they went down 3-0 at the Ballymena Showgrounds this afternoon in the Shane's Hill derby.

United were unchanged from last weeks win over Cliftonville for this Halloween weekend fixture, with the sole change in the squad seeing Owen McKeown return to the bench in place of Jonte Smith.

The Sky Blues suffered a heavy 4-0 loss in the Shield to their Mid and East Antrim rivals eleven days ago, and this one looked like being much the same when Larne took the lead with just two minutes gone. A slick move within ninety seconds of the start ended with Ronan Hale playing in Mark Randall with a first time ball, and he comfortably slipped the ball home past the onrushing Jordan Williamson.

On seven minutes Ballymena were fortunate not to be 2-0 down when Hale was picked out from a cross free in the six yard box, but he somehow failed to connect with the ball and United were able to clear. With Larne well on top in the opening stages United had Williamson to thank for some outstanding saves to keep it to one. First, Ben Doherty got in far too easily before being denied by Williamson, and shortly afterwards the shot stopper sent a bending Mark Randall free kick round the post.

The home side were beginning to find their feet as the half went on and come the half hour mark David Jeffrey's men were more than in it. A good spell finally produced some chances, as Ryan Waide had an effort blocked by Jeff Hughes, with the resulting corner headed just wide by Caolan Loughran. Another set piece provided another chance shortly afterwards, as Loughran headed the ball down for Waide, but his shot trickled narrowly wide of the post.

Just as he had done before his own sides chances, Williamson was the life saver after the openings as he kept Larne at bay again. His first of two saves was a stunner as he kept Hale out one on one when he should've scored, and minutes later Hale eased past Loughran but again Williamson denied him.

On thirty-six minutes, just as tempers were flaring on the pitch and the sideline, a huge flashpoint gave Larne their second goal in controversial circumstances. As Ballymena continued to push for a leveller, they had huge claims for a penalty when the ball clearly struck the arm of Hughes in the box. Referee Steven Gregg, who certainly wasn't endearing himself to anyone in Sky Blue in the first half, decided to wave play on, and straight down the other end Hale found Randall who slotted home his second. It sparked large protests from United, with a hint of offside in the goal adding more salt to the wounds.

More scuffles broke out after the goal as the officials struggled to keep a lid on things, and after a flurry of yellow cards United would've felt massively hard done by to trail by two at the break.

After the first half had been far from quiet, the second failed to live up to its expectations with little happening for large parts. With tensions still running high and decisions continuing to frustrate United, Conor Keeley and Jude Winchester joined a growing numbers of players in the book early on. Ballymena's first chance of the half to try and cut Larne's deficit to one came an hour in, when Steven McCullough latched onto a through ball, but he could only poke it wide.

The Braidmen were struggling to create chances but as they pushed more men forward, it created even more space for Larne to try and kill the game. The Inver men broke two on one but as sub Davy McDaid looked to finish, he was denied by a stunning bit of defending by Keeley, who was immense in the second half. Keeley could do nothing however, on sixty-four minutes as Navid Nasseri made it game, set and match Larne with a third. John Herron knocked the ball through for McDaid who was well offside, but he gave up on the ball to allow Herron to pick it up, and he squared it across goal for Nasseri who had the simple job of tapping the ball home.

To their credit United continued to huff and puff despite being well beaten, and a good chance came and went as Keeley saw a header come off the post. Continuing to exploit the space going forward Nasseri thought he'd made it four, only for the flag to rule his finish out for offside, before Williamson did well yet again to deny Andy Scott.

In added time McDaid rounded Williamson and looked certain to give Larne back to back 4-0 wins on Warden Street, but Andy McGrory did superbly well to clear his shot off the line, as United found themselves undone by some horrid luck and competent Larne attacking to taste defeat.