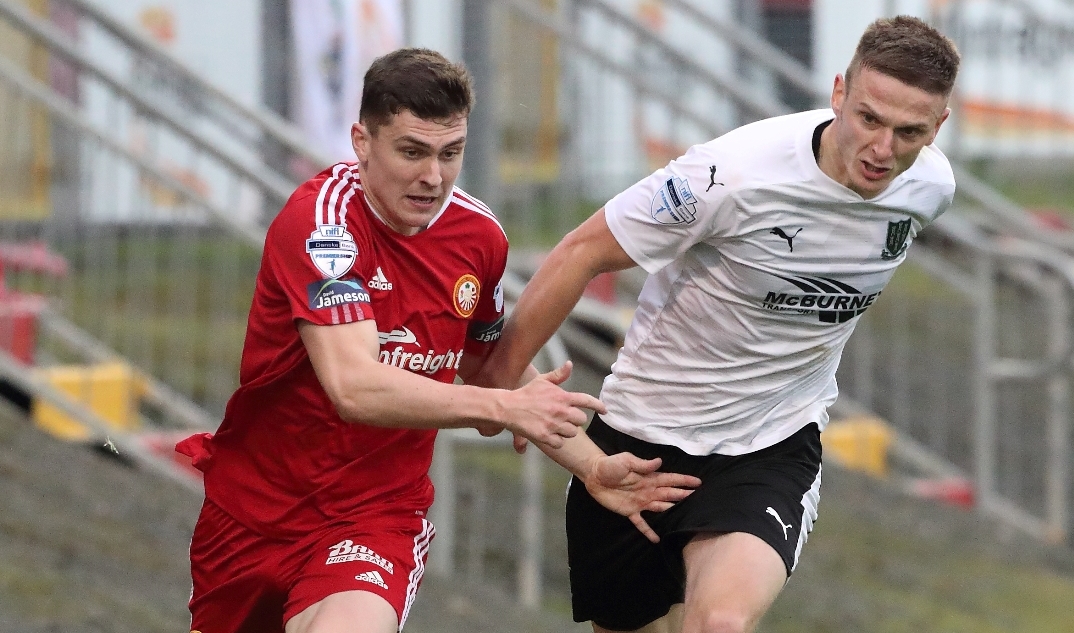 Ballymena United rounded off a good weeks work by defeating 9 man Portadown 1-0 in a tight and scrappy affair at Shamrock Park this afternoon.

It was just the solitary change for United from Wednesday night's thrilling cup win at Seaview, as Dan Bramall's dazzling cameo earned him a start in place of Paul McElroy, while Dougie Wilson and Ryan Waide returned to the bench.

It wasn't the most fluid of starts in Mid Ulster between two teams at the wrong end of the table, with a scrappy opening twenty minutes providing no chances. Portadown were handed a decent chance to finally work a goalkeeper when a Caolan Loughran's foul gave Lee Bonis a go with a free kick on the D, but his tame effort was easy pickings for Jordan Williamson.

Swiftly down the other end Ballymena were inches away from taking the lead. Leroy Millar slipped Bramall in down the side with a delightful ball, and Bramall's cross missed Jonte Smith's head by the barest of margins in the middle of the goal.

On twenty-nine minutes United had their first real sighter at goal when the lively enough Bramall ended a one two with Jude Winchester with a shot, but it did little to trouble Jethren Barr in the Ports goal.

The half's only flashpoint came thirty-two minutes in when Portadown were reduced to ten men for an off the ball incident. After Loughran and Oisin Conaty had went for the same ball, when play had carried on Conaty appeared to dangerously stick a boot into Loughran's midriff. After consultation with the 4th official, who witnessed the incident first hand, Evan Boyce showed Conaty the red.
The Braidmen couldn't make much hay with the extra man for the remainder of the half, with chances still hard to come by.

Jack Henderson saw an effort from the edge of box well hit, but straight at Barr, before Stephen Teggart fired well over for the home side. In the final minute Ballymena called Barr into meaningful action for the first time when Conor Keeley, hoping to reproduce his screamer against Portadown on the final day last season, lined one up from twenty-five yards, and forced Barr into a fine stop, as the half ended level.

David Jeffrey made a double change at the break as Henderson and Owen McKeown both made way for McElroy and Wilson. Much like the first, the second half was a slow burner at first, with the first chance falling Bramall's way ten minutes in, but as tried to recreate his midweek goal, this time he blazed over.

Ballymena were seeing more of the ball with the man advantage, but were doing little with it and the hosts still carried a threat, with Bonis heading over a great chance with no one in white around him. The Sky Blues were dealt a huge blow around the hour mark when after being on the end of one of numerous poor Portadown challenges, Bramall had to be stretchered off when Barney McKeown brought him down recklessly. Ryan Waide came on to replace the Englishmen.

After a lengthy delay for Bramall's treatment, Ballymena continued to dominate, but struggled still to create against a side who were in no rush. United finally tested Barr when Winchester did well to beat his man and find McElroy, who shot well on the turn and forced Barr into a good stop, low at his near post.

With twenty minutes to go, the away side were fortunate not to be behind when they fell asleep from a quick set piece, but luckily in a good position Chris Lavery shot straight at Williamson. On seventy-six minutes Portadown were reduced to nine men when Nathan Kerr, who had been booked in the first half, hauled down Waide on the edge of the box to receive his marching orders along with Conaty.

United had to have fancied it with a two man advantage, and less than two minutes after Kerr's red, Ballymena finally nudged themselves in front. The skipper Millar delivered a ball in from the right and Andrew McGrory nicked in ahead of the 'keeper to bundle the ball home and finally give Ballymena their goal in front of the away support.

There was very little to report from the final ten minutes, but Portadown gave it a go in the final few minutes, however United stood their ground to see out their first away win in the league this season and record back to back wins this week.