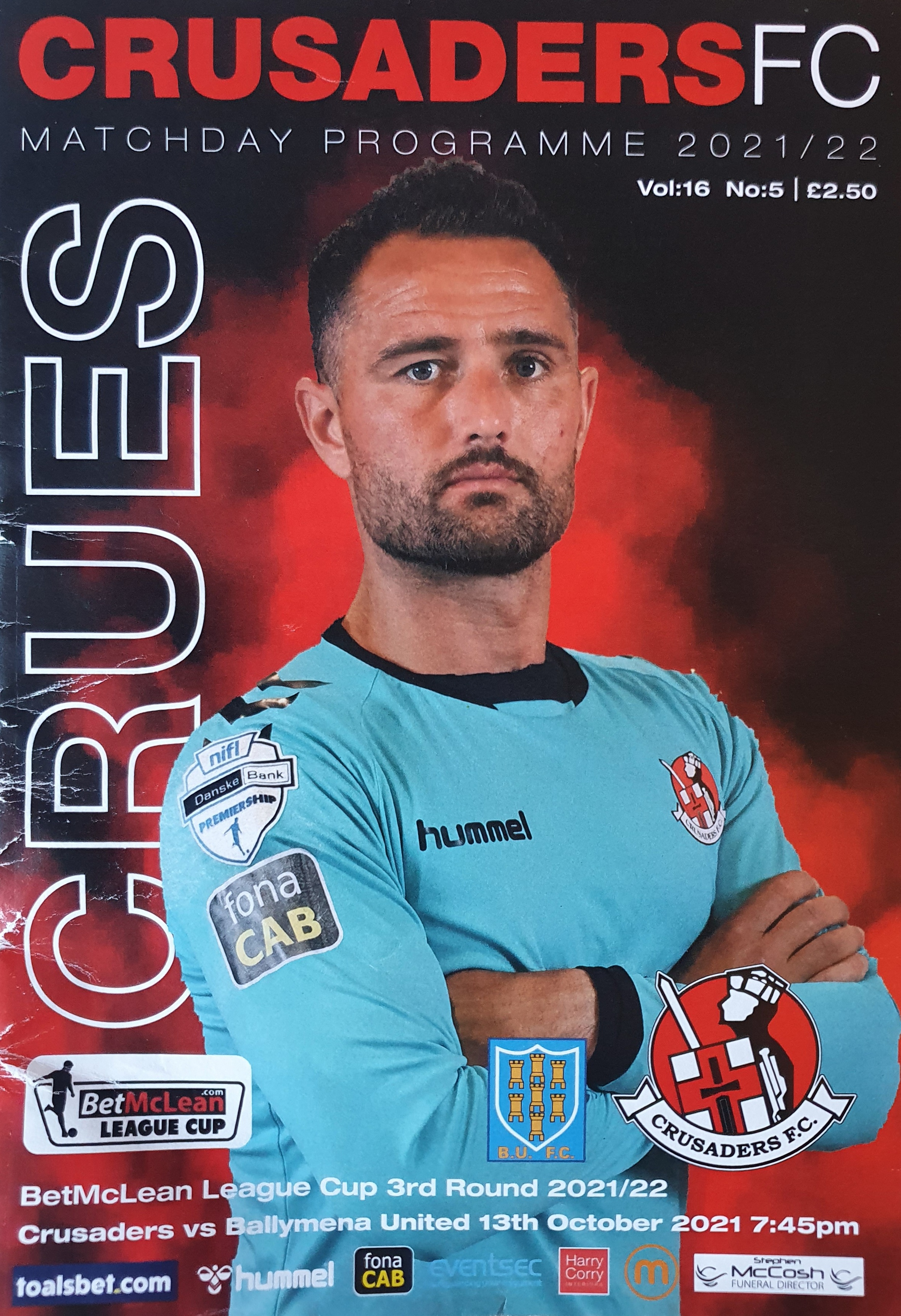 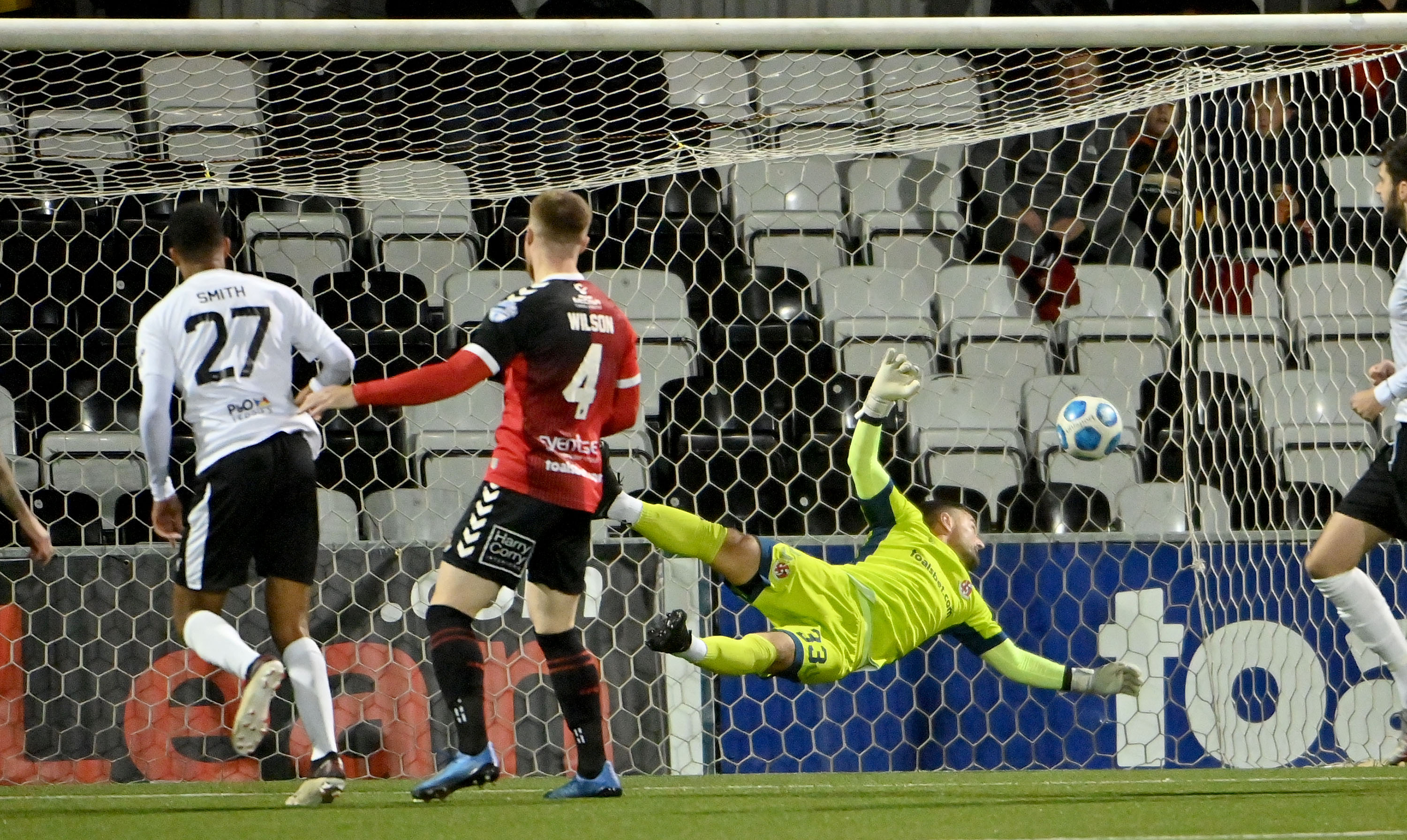 A Jonte Smith goal in the last minute of extra-time gave a hugely impressive Ballymena United a massive 3-2 win over Crusaders at Seaview in the 3rd round of the BetMcLean League Cup on Wednesday night.

United were forced into another change for this one, with injury keeping Dougie Wilson out, as he was replaced by Caolan Loughran.

Hoping the League Cup would provide some form of relief from a difficult run in the league, Ballymena started well and were ahead inside six minutes. The visitors won a free kick wide left, and Ross Redman's cross was headed home neatly by Jonte Smith who rose highest for his third goal in Sky Blue.

United continued their strong start and Andy McGrory's high, long ball forward found Smith, who took it down well before seeing his shot saved. There wasn't much goalmouth action for much of the half after those chances, but Ballymena were probably the better side as they looked in their best condition of the season so far.

The Crues eventually got going, as Brandon Doyle and Jordan Owens both tested Jordan Williamson, with albeit tame efforts, while Smith did the same at the other end. On forty minutes, as Ballymena closed in on a half time lead that they'd have been good value for, Crusaders equalised with a poor goal to concede. After some nice Ballymena passing, a wayward Smith ball found Aidan Wilson and eventually Jordan Owens played in Ben Kennedy who was in acres of space, and his deflected shot looped over Williamson and in.

Despite the leveller, the Braidmen almost found time to regain the lead before the break, but Loughran was unlucky to see his back post header come off the crossbar.

Crusaders had probably their strongest spell at the start of the second half, with a string of chances early on. Doyle fired a over after a quick free kick, before Kennedy fired a good chance straight at Williamson and then the 'keeper made a fine stop to deny Ross Clarke low at his near post. After United stood strong to keep Crusaders out, down in large part to huge performances from Loughran and Conor Keeley, Ballymena came on the offensive again in the second half of the second period. After a great team move ended with Redman slipping in Jude Winchester, he saw his shot kept out well by Jonny Tuffey at his near post.

Crusaders had the ball in the net twenty minutes from time when Owens headed home, but it was ruled out after the striker had fouled Williamson as he connected with the ball.

David Jeffrey turned to Lee Chapman and Dan Bramall with ten minutes to go, and whilst Chapman performed admirably, it was Bramall's cameo that lit up Seaview. In the final minute of regular time Bramall almost won the tie in style. The winger showed blistering pace to get to the ball, before he curled a long range effort agonisingly over the crossbar, as an impressive ninety minutes saw extra-time beckon.

United had a great chance to regain the lead within two minutes of the restart when another fine move ended with Smith playing in Andy McGrory, but with Tuffey closing him down he lifted his effort over the 'keeper but wide of goal. It was end to end afterwards as Kennedy placed a free kick just wide, before Leroy Millar saw a good chance well saved, in a move that had been created by Millar, Winchester and Jack Henderson, who were all top quality over the course of the game.

On ninety-eight minutes the away side saw a huge chance to retake the lead pass them by when Bramall's low ball across the box fell to McGrory, but despite him and Redman impressing, he dragged his shot wide from a great position. However, on the stroke of the half time whistle, Ballymena did go 2-1 ahead through a Bramall goal of the season contender. Millar found Bramall in an innocuous position on the left, but the Englishmen cut in before unleashing a truly incredible thirty yard effort into the top corner past Tuffey, who had no chance.

Eight minutes into the second half of extra time the hosts levelled the tie up for second time through Owens. Crusaders worked it well down the right and from the byline Billy Joe Burns crossed for Owens who found space in the middle of the box to draw the game level.

That, however, wasn't to be the end of the drama in an incredible game in North Belfast. Despite a fantastic performance, United may have expected to have to dig in for penalties, but they did the opposite, taking the dying embers to Crusaders. Loughran tried his luck from all of forty yards from a free kick and his cracking effort was well saved by Tuffey, but as extra time entered added time, United won it in style as the phenomenal Smith added his second. The goal was created by Bramall, who continued to terrorise the home side on the wing, as he skipped by Burns and crossed for Smith, who directed his header into the bottom corner to seal the win and spark big celebrations in front of the travelling support.

After a disappointing run of results and performances in the league, United looked a different side in Belfast, with every player, to a man, mightily impressive to book Ballymena's quarter-final spot.