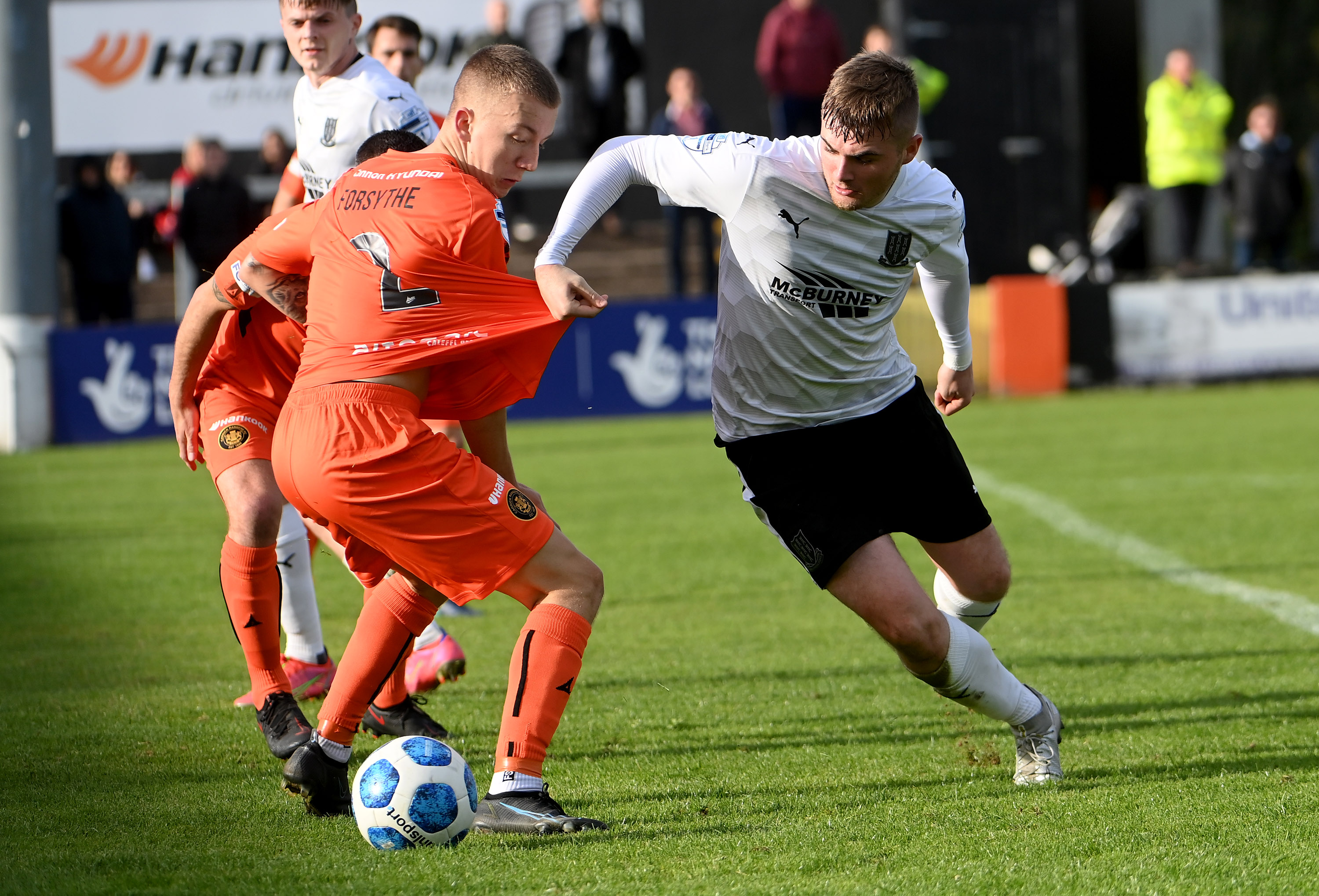 Ballymena United saw a last minute Jordan Gibson goal condemn them to a 2-1 defeat to 10 man Carrick at Taylors Avenue on Saturday afternoon.

Hoping to build on the midweek win against Dungannon, United made two changes as Dan Bramall and Owen McKeown made way for Jonte Smith and Lee Chapman.

It was a tentative start on the coast as Ballymena looked to continue their recent winning form over the Gers, and it was the visitors who went close first. From a corner, ex-Carrick defender Chrissy Rodgers sent a header goal-bound, but it was well cleared off the goal line.

A minute later Ballymena were adamant they should have had a penalty when Paul McElroy was bundled over in the box, but referee Andrew Davey wasn't interested. As Carrick grew into the game, Rodgers, who produced an accomplished first half display, was in the right place to block a good chance for Alex Gawne.

With thirty-two minutes on the clock it was United who opened the scoring as Smith made it two goals in as many games. A Ross Redman free kick was smashed back across goal by Caolan Loughran and Jonte Smith was quick to react and instinctively head home from close range.

Straight from the kick off after the goal the hosts were reduced to ten men when former Sky Blue Stewart Nixon needlessly caught Loughran late with an unbelievably high and wreck less challenge, that sparked confrontations on the pitch and touchline.

Before the whistle, with both teams stacked with former players of their opponents, another former Sky Blue in Reece Glendinning curled a free kick narrowly wide, as a fairly eventless half all round saw Ballymena into the break with a slender lead.

United's second half performance was almost hard to believe as from the red card onwards they virtually fell apart, with Carrick becoming the much better side throughout the second half.

Despite the hugely disappointing final forty-five minutes from the Braidmen, they let a massive chance pass them by at the start of the half. Carrick almost staked their claim for the most bizarre own goal of the season when one of the back line sent a thumping header from the edge of their own box off their own crossbar, and the rebound fell to Ryan Waide, but he headed over from point blank range.

After Gawne had a deflected shot easily gathered by Jordan Williamson, the Coleraine loanee brought the hosts level shortly afterwards. One simple long ball up from 'keeper Neil Shields was missed by Rodgers and Alexander Gawne beat Williamson to the ball to loop a header over the 'keeper and in. Three minutes after scoring Gawne could easily have had another when he directed a close range header straight at Williamson, but by this stage United were struggling to get a hold of the ball.

The away side did have the ball in the back of the net when Jude Winchester did well to supply McElroy who finished, only to be ruled offside when the ball was played through.

Coming into the final fifteen minutes Ballymena looked like the team with ten men as a Lloyd Anderson corner almost curled straight in and sub Jordan Gibson blazed a huge chance over the bar after good play.

Ballymena's best, and in truth only, spell of decent play came towards the final ten minutes, and Leroy Millar did really well to find Waide, who saw an effort after good feet take a slight nick as it hit the crossbar. From the resulting corner Loughran headed just wide.

On a brighter note in a tough day, Ballymena were able to welcome back Andy McGrory following a lengthy lay off, as he replaced Chapman. Bramall also came on for Smith, while Winchester was replaced by Brendan Barr.

Gibson could've had his winner sooner when he was thwarted by a top drawer Williamson save on eighty-three minutes, but in the third minute of three added on, Carrick hit with a winner which was more than deserved. A throw in was launched into the box and it came off the head of Loughran into the path of Jordan Gibson, who easily finished from close range to give Carrick all three points in another dire day for United in terms of both the majority of the performance, and the result.