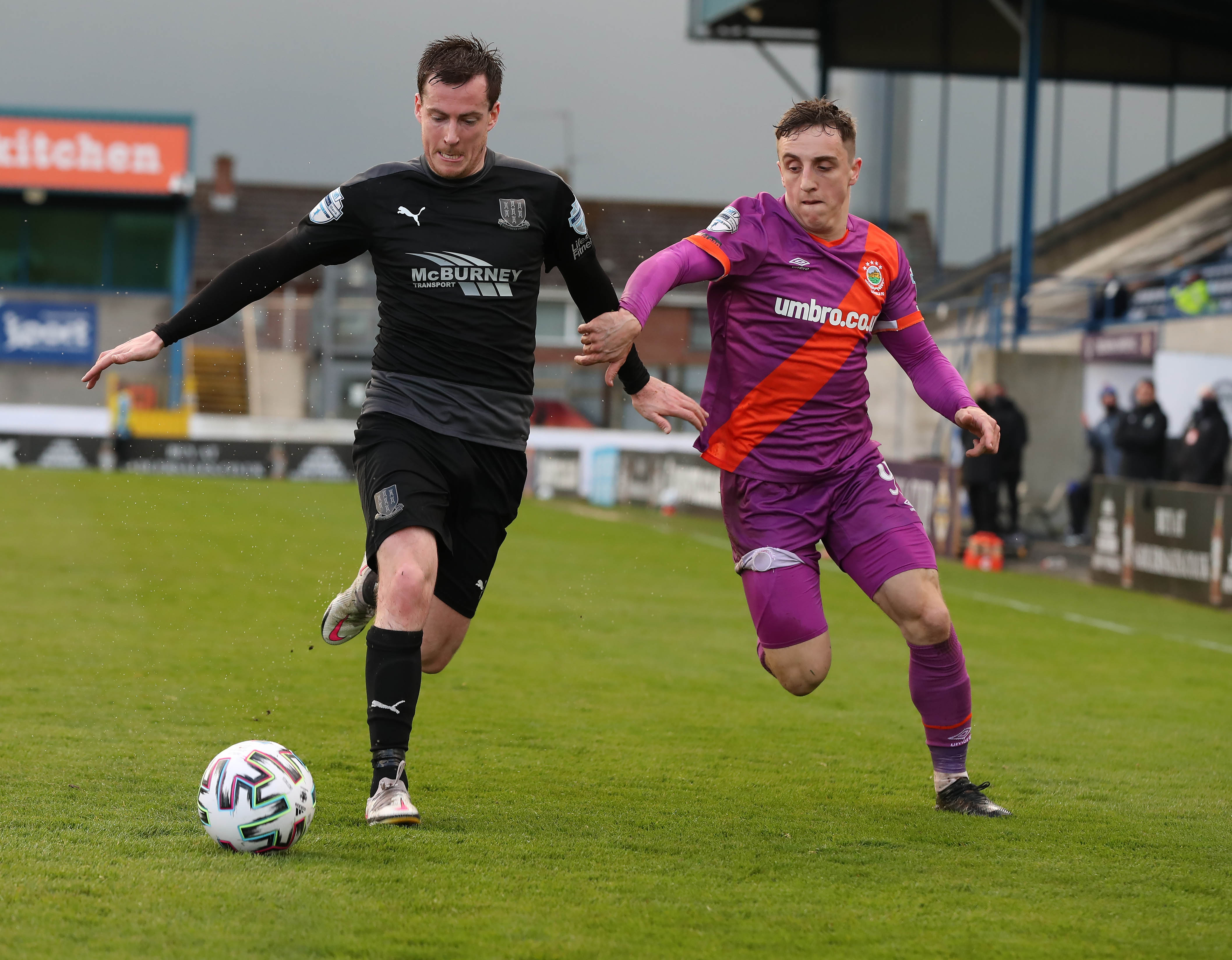 Ballymena United bowed out of the Sadler's Peaky Blinder Irish Cup at the semi-final stage after a 3-0 loss to Linfield at Mourneview Park on Tuesday evening.

United made two changes to the side that beat Dungannon last time out, with Conor Keeley and Sean Graham coming in for the injured Kofi Balmer and on loan Linfield player Trai Hume, who couldn't play against his parent club.

Ballymena started brightly as they looked to make their second straight Irish Cup final, but struggled to turn the decent play into chances. At the other end, Linfield were dangerous when they did attack and the games first chance came when Cameron Palmer played in Stephen Fallon, but his shot went across goal and wide.

A poor goal kick from Ross Glendinning to Niall Quinn gave Linfield the best chance of the game so far, but as Quinn moved in on goal Glendinning redeemed himself by making a big save.

On nineteen minutes the league leading Blues moved ahead in the tie thanks to Fallon. On an extremely wet surface, Keeley timed his slide tackle wrong to allow Shayne Lavery to progress down the left hand side, and he crossed for Stephen Fallon who came sliding in to send the ball home.

With Linfield now in the ascendancy Joel Cooper fired over from a tight angle, but Ballymena were being far from overrun and Ryan Waide tested Chris Johns with an effort at the other end.

The Sky Blues had a number of chances to put the ball into Linfield's box from set pieces, but whilst Johns dealt with most, when he didn't Keeley took a swing and a miss and after a spot of pinball United had a penalty appeal for handball turned down.

Five minutes from the break Linfield should've made it 2-0. Cooper went clean through on goal from a Lavery ball, and despite looking offside no flag came, but Glendinning made himself big to make a huge save to keep it 1-0 at the break.
Ballymena couldn't have had a worst start to the second period as they shot themselves in the foot to fall two goals behind inside four minutes. Josh Kelly's ball back to Jim Ervin was too heavy and bypassed the skipper, and Shayne Lavery pounced to beat Glendinning to the ball, before tapping home into an empty net.

It should've been 3-0 shortly afterwards when a corner fell to the completely unmarked Cooper at the back post, but the former Oxford United man smashed his close range shot off the base of the post.

Ballymena were finally able to work their way into the second half and had two good chances in as many minutes to pull one back. First, Leroy Millar's low cross into the box was turned narrowly wide by a sliding Waide at the near post, and shortly afterwards Paul McElroy flicked a looping header onto the crossbar and over.

United were left to rue not taking advantage of their best spell in the half as Linfield all but booked their final spot with a third on sixty-three minutes, as Quinn's corner from the right was headed home at the near post by Shayne Lavery for his second.

With the game now effectively out of Ballymena's range, they struggled to create many chances to try and stage a memorable comeback, with Keeley being denied by Johns from all of forty yards, before having a header saved in the box, the closest the Braidmen came.

The Northern Ireland international Lavery will be wondering how he didn't take the match ball home as he fired two glorious chances over the bar in quick succession, but the Blues had done more than enough as they defeated a Ballymena side who were simply beaten by the better team on the day, to fall at the penultimate hurdle of this years cup.